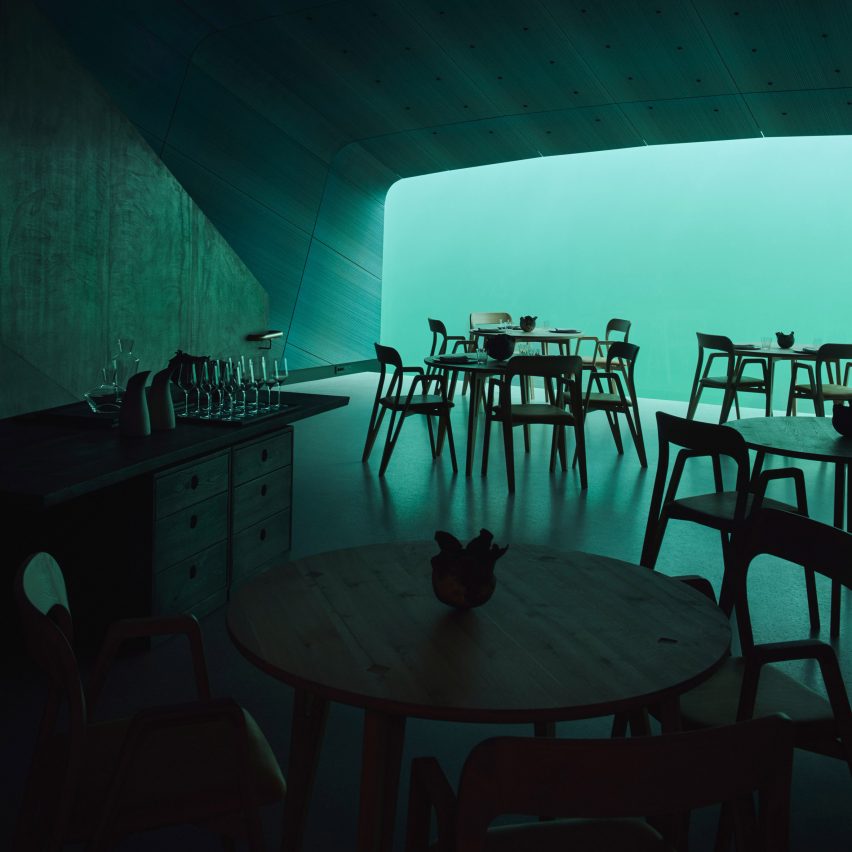 From a research centre set to be built on the ocean floor to a holiday home that looks out directly to the sea, architects are creating numerous structures that are submerged under water.

With awareness and environmental concern mounting over the impact human activity has on the planet’s oceans, many of these structures are designed to help people appreciate the importance of marine ecologies.

Here are seven underwater buildings and proposals that demonstrate what is possible when building under water:

Under, Norway, by Snøhetta

Aptly named Under, this restaurant is submerged in the North Sea water that surrounds the remote Norwegian village of Båly. With a floor plan that spans 495-square-metres, architecture studio Snøhetta claims that it’s the “world’s largest underwater restaurant”.

Designed to resemble a sunken periscope, the restaurant is made up of an exposed concrete tube fronted by panoramic acrylic windows. Alongside providing diners with a place to eat, it will be used as a marine research centre.

Find out more about Under ›

The Muraka, Maldives, by Ahmed Saleem and Yuji Yamazaki

This private holiday villa in the Maldives has an aquarium-like bedroom suite encased in curved, seven-inch-thick acrylic walls where guests can observe marine life.

Named The Muraka, the underwater holiday home designed by architect Ahmed Saleem and New York studio Yuji Yamazaki also has a kitchen, living and dining area, and three bedrooms that are positioned above water.

Find out more about The Muraka ›

Set to be built two kilometres from land at the Busselton Jetty in Western Australia, the Australian Underwater Discovery Centre was designed by architecture studio Baca Architects to mimic the shape of a whale surfacing from the sea.

Visitors to the centre will be able to look out of a large window onto the ocean floor where they’ll be able to observe the marine habitats of Geographe Bay.

The ReefLine, US, by OMA

The ReefLine is a seven-mile-long underwater sculpture park being built by architecture studio OMA along the shoreline of Miami Beach. It will feature installations that can only be viewed while snorkelling.

The team of marine biologists, researchers, architects and coastal engineers working on the project hope that it will raise awareness around the negative impact climate change is having on coral reefs and rising sea levels.

Find out more about The ReefLine ›

Located three metres under the Mediterranean Sea near the island of Sainte-Marguerite, is an underwater museum that contains six large sculptures modelled on local islanders.

The permanent installation forms the Underwater Museum of Cannes, which is designed to bring attention to the ocean environment and the impact human activity has on marine life.

Find out more about Underwater Museum of Cannes ›

Docking the Amsterdam, Netherlands, by ZJA

Slated to open in 2025, Docking the Amsterdam is a museum in the Netherlands that will encase the wreck of the historic ship Amsterdam.

Architecture studio ZJA plans to build a glass tank around the 40-metre-long wrecked ship, allowing visitors to view it from all angles. They will also be able to learn about Dutch maritime history in the museum’s exhibition spaces.

Find out more about Docking the Amsterdam ›

Hailed as the ocean’s equivalent to the International Space Station, it will play host to up to 12 researchers and aquanauts at a time. Scientists will be able to grow their own food in the station which is located 18 metres under the sea near Curaçao, an island in the Caribbean.

Find out more about Proteus ›