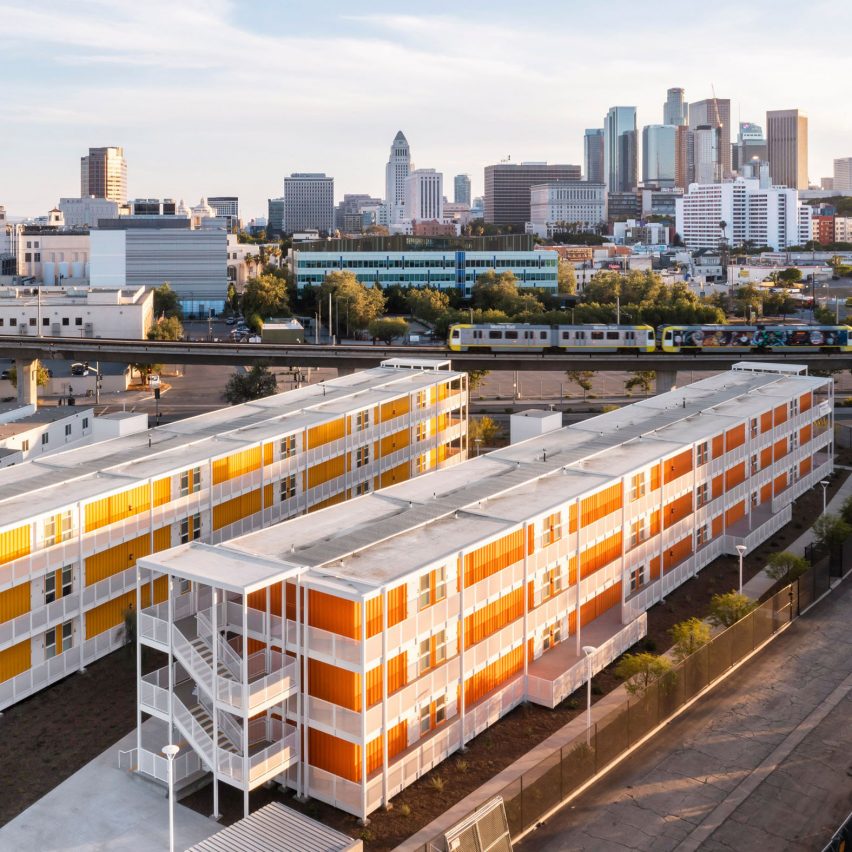 The Hilda L Solis Care First Village – formerly known as the Vignes Street Interim Housing Project – is located on a 4.2-acre (1.7-hectare) site in Downtown Los Angeles. The complex is named after Hilda L Solis, who chairs the LA County Board of Supervisors.

The facility was created by NAC Architecture, which has several offices in the US, and California-based Bernards, a builder and construction management company. The firms worked in collaboration with LA County’s Department of Public Works.

Owned by the county, the site formerly held a parking lot and was slated to become a staging area for the construction of a new jail.

In 2019, plans shifted, as officials began to explore options for using the site for homeless housing. Reports estimate there are at least 60,000 people in the LA area who are experiencing homelessness.

When the coronavirus pandemic struck last year, the county moved forward with the housing plans.

“With the unhoused population growing and increasingly at risk during Covid-19, the need was immediate,” the team said. “Schedule became a critical driver.”

The modular elements, which could be built off-site, helped speed up the project.

“Design, permitting, and construction of the project was aggressively accelerated to meet the heightened need for people living on Los Angeles’ streets in the midst of a pandemic,” said NAC Architecture.

Encompassing 64,000 square feet (5,946 square metres), the facility was completed in six months. It offers 232 housing units, along with a common building that holds a commercial kitchen, dining area, laundry facilities and administrative spaces.

The site also has landscaped courtyards, a dog park, and parking spots for staff and residents.

The three-storey buildings are formed by the steel shipping crates, which are stacked atop each other.

“The shipping containers are stacked, fixed in place, and use an attached structure of open corridors and stairs to facilitate access to each unit,” said NAC Architecture.

The buildings are painted white and bright shades of yellow and orange.

To make the cargo containers suitable for habitation, the team cut large windows in them and fully insulated the walls and ceiling. Each container holds two living units measuring 135 square feet (12.5 square metres).

The apartments are equipped with a bed, microwave, mini-fridge, flat screen and private bathroom. The shipping containers were refurbished by Crate, a California company.

To help mitigate the spread of the coronavirus, and to help increase the residents’ autonomy, all units at the complex have their own heating and ventilation systems.

The facility opened in April 2021 and reached full occupancy the following month.

According to the website for Hilda Solis, the project cost $57 million (£41.4 million), of which $51 million (£37 million) came from the federal government’s Coronavirus Aid, Relief, and Economic Security (CARES) Act. The remainder was covered by the local government.

Other buildings for LA’s homeless population include The Six building by Brooks + Scarpa, which offers low-cost, permanent housing for the homeless and disabled veterans, and LOHA’s MLK1101 project, which was named housing project of the year in the 2019 Dezeen Awards.

The photography is by Dan Ursitti.