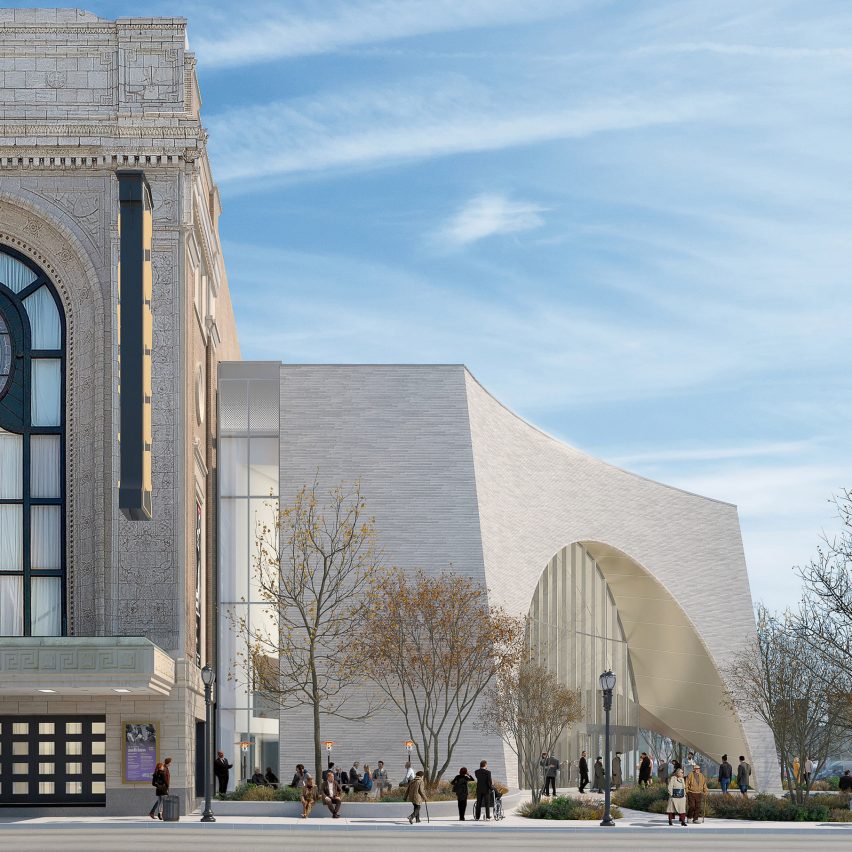 Architecture studio Snøhetta has unveiled its design for an expansion to St Louis Orchestra’s Powell Hall that will feature scalloped walls, a grainy brick facade and glazed arches.

Snøhetta is managing both the structural and landscape architecture for the addition to the home of the second-oldest orchestra in the United States.

“Drawing on the spatial language of historic concert halls and the instruments within, the new entry is shaped as a series of canted shells assembled from raked masonry units, creating a front-of-house addition defined by simple inclined surfaces and arched openings inspired by the musicality of the historic building and its program,” said Snøhetta.

The entrance will have a grainy brick facade that will wrap around the current 1920s brick-and-stone structure. The addition will be shorter than the current building and decrease in height as it wraps around the building. 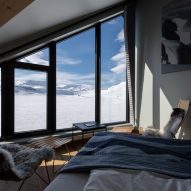 Where the new structure meets the old will be a pane of vertical glass, which the architects call a “glass ribbon”, that corresponds with the paned, vertical glazing on Powell Hall’s face.

A glazed archway will serve as the primary entrance to the lobby. Through this entrance, a spiral staircase will take visitors into the multiple levels of the concert hall.

Within the lobby, the staircase will branch out onto mezzanines that look over the volume and out through the glazing of the arch into the outdoor plaza.

The plaza will replace an existing parking lot on the corner of Grand Boulevard and Samuel Shepard Drive.

With multiple pathways through the plaza into the hall, the space will be a way for the public to gather and for the concert experience to extend outside, according to the architects. 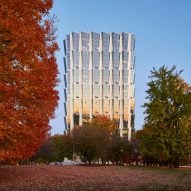 “Inspired by the music created and performed within the building, the site design works to create light and lyrical entry groves that frame the new addition,” said Tornier.

The structure is set to be completed in 2025, in time for Powell Hall’s centennial.

Snøhetta was founded in 1989 in Oslo and now has offices internationally. Its recent projects in the United States include an extension to Dartmouth’s Hopkins Center for the Arts as well as a curved glass research centre for Ford in Dearborn.