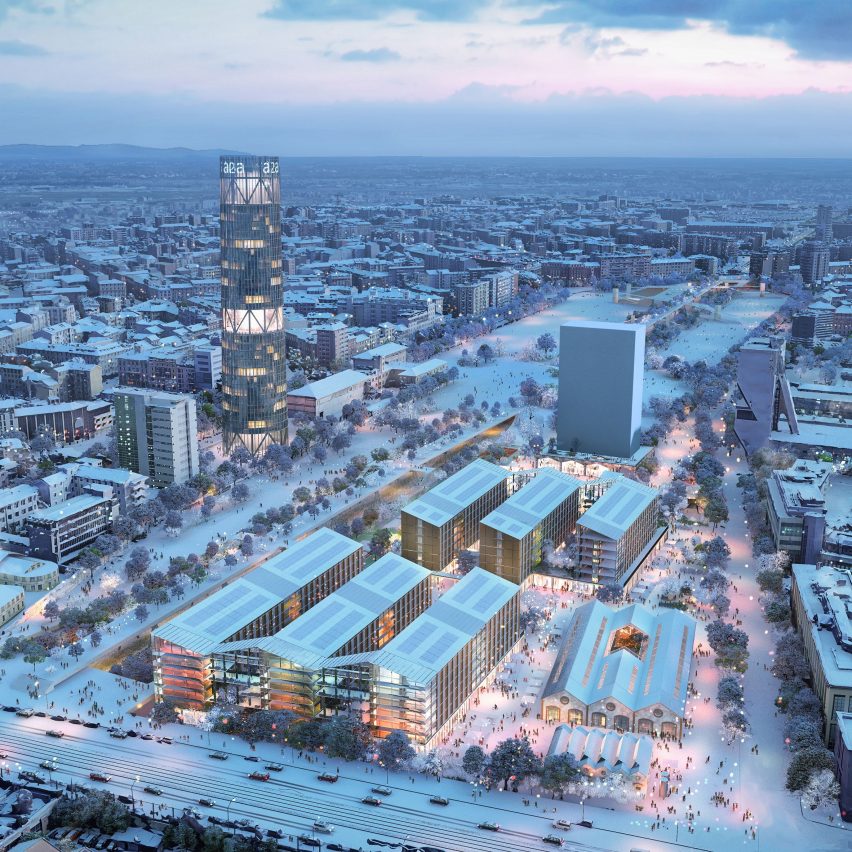 Architecture firm Skidmore Owings & Merrill has been chosen to design a mass-timber Olympic Village with “minimal environmental impact” for the winter Olympic games hosted in Milano-Cortina.

Skidmore Owings & Merrill (SOM) was selected following an international competition to complete the village, which will form part of the redevelopment of rail yards in Milan’s Porta Romana area.

The studio’s proposals include the transformation of two historic structures and the construction of six timber buildings to house athletes during the event in 2026, which will then become student and affordable housing afterwards.

A series of public spaces will eventually be surrounded by shops, bars, restaurants and cafes at street level, and will host farmers’ markets and community events – integrating the village into the exisiting urban fabric.

“Rather than ceasing to be of use after the Olympics, the Porta Romana Olympic Village will ultimately become a vibrant, self-sustaining neighbourhood built around the principles of social equity, environmental commitment, wellness, and inclusivity,” said SOM design partner Colin Koop.

“The village adopts the rhythm of the area’s streetscape, creating a porous urban block with a variety of public spaces and communal anchors that will enhance Milan’s vibrant tapestry of ground-floor experiences.”

Communal terraces shaded by vertical planting will connect the blocks and provide gathering spaces for occupants.

The development, led by developer COIMA, is intended to create a sustainable urban community with a variety of green credentials.

“Thanks to innovative sustainability features, the village will target minimal environmental impact in accordance with NZEB (Nearly Zero Energy Building) requirements,” said a statement from SOM.

Manfredi Catella, COIMA founder and CEO, added: “The 2026 Olympic Village will represent a new urban laboratory for Milan, the first to be designed and built in its future configuration with spaces, functions and materials already designed for their conversion, meeting NZEB principles.”

These features will include passive cooling strategies, solar panels and rooftop gardens among others, which together will allow the village to produce up to 30 per cent of the energy it requires.

Recycled stormwater systems and spaces for urban farming are also included in the proposal.

Plans for the site are encompassed by the broader Parco Romana project, for which the masterplan was recently revised following a public engagement process.

Better links and access to public spaces, as well as a more-even density distribution, are among the updates to the scheme.

The Olympic Village is due to complete in July 2025, ahead of the winter games scheduled for 6 to 22 February 2026.

Officially the XXV Olympic Winter Games, the event will be jointly hosted the city of Milan and the Cortina d’Ampezzo ski resort, located 255 miles away by car in Italy’s Dolomite mountains.

The logo for the Milano-Cortina games was revealed in April after a public vote chose a design by branding agency Landor Associates.

The next Winter Olympic and Paralympic Games will take place in Beijing in 2022. Its logo was designed by artist Lin Cunzhen to reference Chinese calligraphy.

Tokyo is currently hosting the summer Olympics, which were scheduled to happen in 2020 but delayed due to the Covid-19 pandemic. Catch up with all the architecture and design news from this year’s games.

The images are courtesy of SOM.