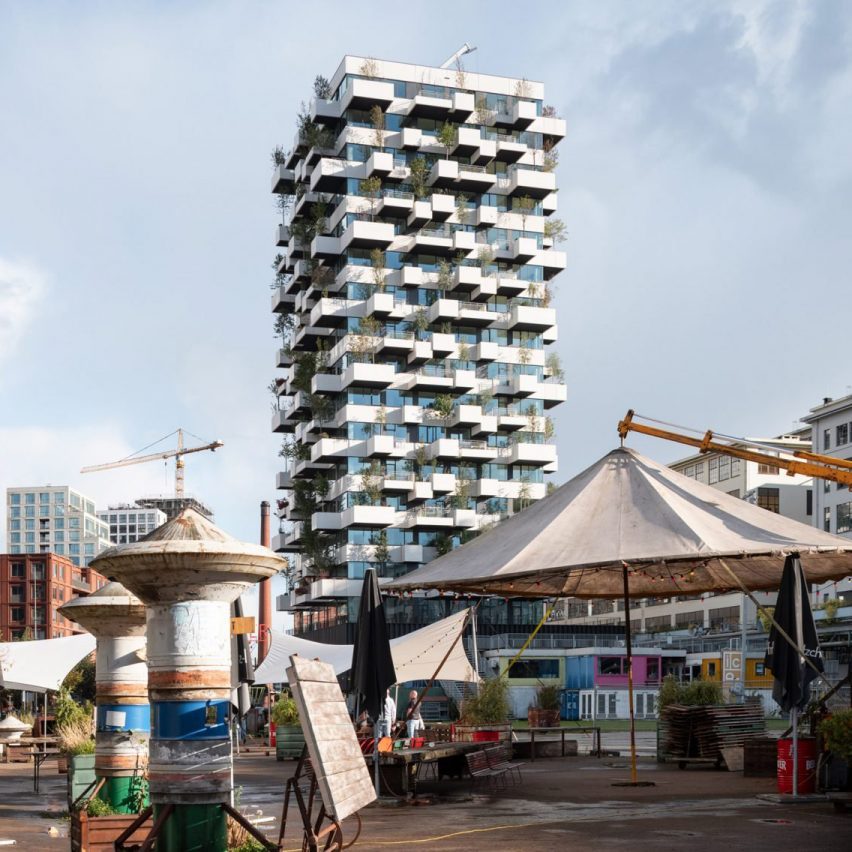 The housing block is 70 metres tall and surrounded with staggered, protruding balconies that support over 10,000 plants.

It is Stefano Boeri Architetti‘s first “vertical forest” in the Netherlands.

“Not only as a necessity in order to improve the environments in cities around the world, but also a great opportunity to improve the living conditions of poorer citizens,” she told Dezeen.

Trudo Vertical Forest is wrapped in white concrete horizontal bands that envelop the building between strips of solar-reflective glazing.

From the horizontal concrete bands, staggered planter balconies were extruded at different widths, heights and depths. These balconies support 10,135 plants, shrubs and trees.

The extruded planter balconies house the vertical forest and were fitted with sensors that monitor the hydration and nutrition levels of the soil.

The studio explained that it rationalised a number of technical solutions, used prefabricated components and cost-efficient materials in order to meet the budget constraints of social housing.

“The use of latest generation construction technologies, the rationalisation of certain technical solutions for the facades and more generally, the optimisation of resources related to the project and the construction of the building allowed to achieve the goal to realise a Vertical Forest especially intended to accommodate low-income users and young couples,” said Cesa Bianchi.

“The materials chosen such as concrete and prefabricated components ensured cost containment in a strategy consistent with the inner nature of social housing,” she continued.

“The design itself focused on finding the best performing solution, which could provide the right balance between aesthetic and economic objectives.”

According to the studio, each year the vertical forest will absorb over 50 tonnes of CO2 and over 13 tonnes of oxygen.

The practice added solar panels to the roofs of adjacent buildings in order to produce some of the energy consumed by the tower, while a reservoir-cum-rainwater collection system was installed to irrigate the planting.

Each of the 50-square-metre apartments has reconfigurable space with ceiling heights of at least 3.5 metres. Every apartment has its own balcony fitted with green boxes that contain a single tree and 20 bushes.

“On Trudo Tower plants and trees are inserted not only in tanks – just as in the Bosco Verticale in Milan – but also in vases placed at the same level as the terrace,” added Stefano Boeri Architetti founder Stefano Boeri.

“This design has been led by the desire to offer multiple connections between inside and outside and humans and vegetation,” he told Dezeen.

The building accounts and accommodates for its tree’s increase in weight and size by estimating that each tree could double in weight during its lifetime.

The tower’s vertical forest will be monitored by abseiling gardeners who will maintain and prune its trees and shrubs.

Trudo Vertical Forest is one of many vertical forests designed by Stefano Boeri Architetti. In 2019 the practice unveiled plans to build a tower with vertical forest in Tirana, Albania.

More recently the practice completed a building in Antwerp which was wrapped in over 1,000 plants.

Photography is by Norbert van Onna unless stated otherwise.