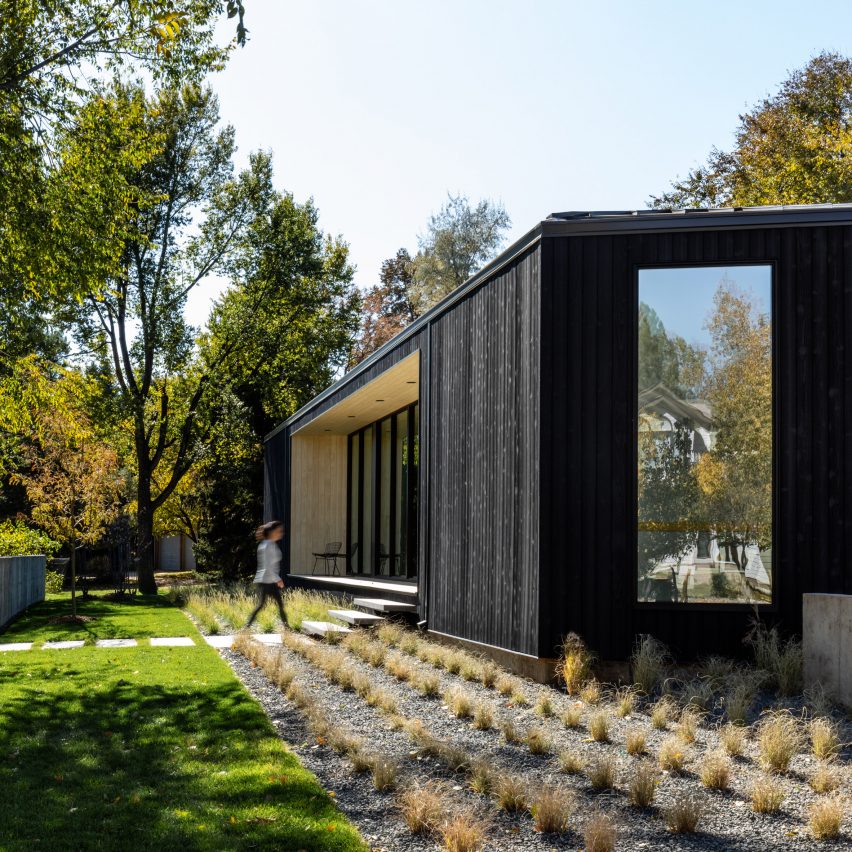 Architecture firm Studio B drew upon geometric paintings to design a low-lying, trapezoidal home in Colorado that features cedar cladding and large stretches of glass.

Designed for a family, the Vista Drive Pavilion is located on a tree-dotted site in Boulder, a city in the foothills of the Rocky Mountains. The full-time residence lies within walking distance of a bus stop and a vast network of trails and bike paths.

The overall design was conceived as “a composition of solids and voids enjoying varying levels of transparency”, the studio said.

Facades have a mix of tall windows set into Western red cedar that was brushed and painted black. The home is topped with a five-ridge roof clad in standing seam metal.

“In the evening, the blackened exterior fades into the darkness, leaving a uniform glow where the portals occur,” the team said. “What remains is a black, floating silhouette containing a collage of form and light.”

Part of the front elevation was cut away to form a covered porch. Terraces were also incorporated on the rear and south sides of the house.

Within the dwelling – which has a main level and basement – one finds rooms with light tones oriented around the glazing. Some of the hallways terminate with windows to frame the outdoors.

On the northern end of the dwelling, the team placed an office, laundry room and garage. The opposing side holds the main suite and two additional bedrooms.

The central portion has a living room and dining area oriented around a large central black kitchen island that mirrors the exterior, creating a contrast with the white walls.

“The kitchen is a dark central core, reflecting the blackened exterior and drawing attention to itself as the focal point and heart of this modern residence,” the team said.

To give the house a modern yet inviting feel, the team used a restrained palette of materials, including white oak flooring, white-painted walls and soapstone countertops.

Ceilings vary in height and shape due to the unusual shape of the home’s roof. Ceilings are taller in public areas and lower in more intimate spaces, like bedrooms.

“The light-filled interior develops a visual and physical connection to the adjacent gardens, with each aperture offering its own daylight as the day unfolds,” the team said. 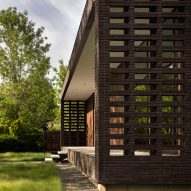 The residence has an abundance of sustainable elements, including low-E glazing, energy-efficient appliances, low-flow fixtures, electric-car charging stations and wood certified by the Forest Stewardship Council.

The south-facing part of the roof was designed for a 14-kW photovoltaic system, both in terms of form and colour.

“The angle and orientation allow the panels to maximise efficiency throughout the day, while the dark colour allows the panels to blend seamlessly into the roof,” the team said.

Continuous exterior insulation was used to help form an air-tight building envelope. The thickness of the exterior “creates a feeling that the structure floats lightly above the ground”, the studio said.

Other Colorado projects by Studio B include a skinny backyard dwelling in Boulder that was designed for a landscape architect and a gabled house in Aspen that features black cladding and cosy rooms awash in natural light.

The photography is by James Florio.

The post Studio B creates trapezoidal Colorado home as "collage of form and light" appeared first on Dezeen.