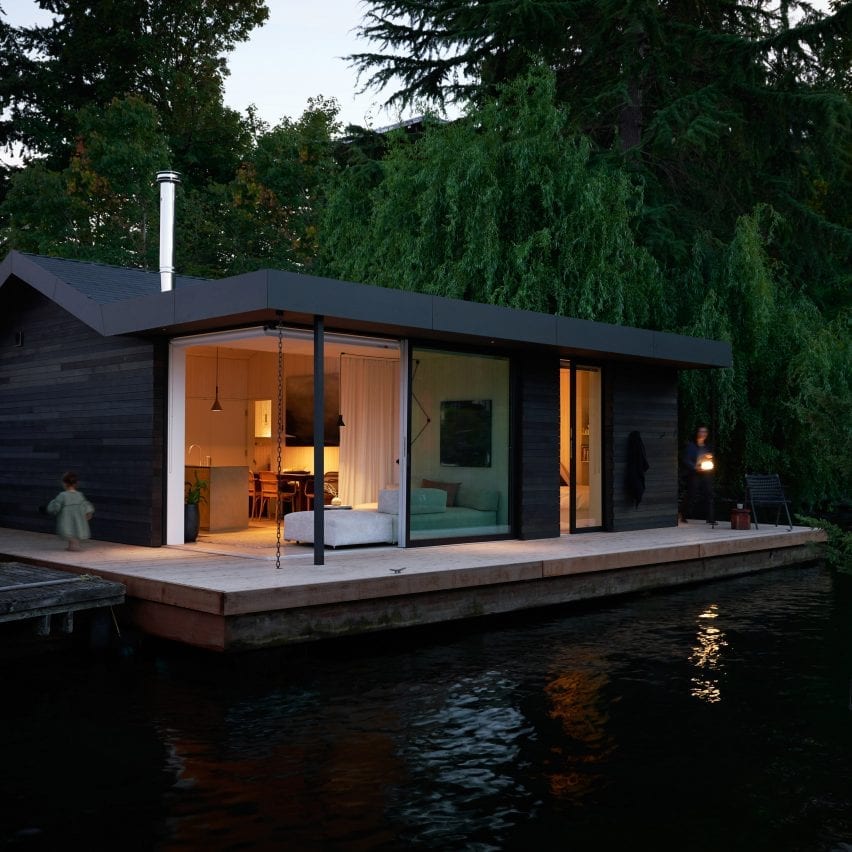 A dark exterior contrasts with light-toned finishes inside a compact, floating home in Washington designed by Studio DIAA co-founder Suzanne Stefan as her own home.
The Portage Bay Float Home serves as the personal residence of Stefan, who co-founded Studio DIAA in 2019. The project recently won a 2021 Housing Award from the American Institute of Architects.

Following a long tradition of floating homes in Seattle, the dwelling is located on the north end of Lake Union, in a spot called Portage Bay.

It was built on top of a log-float foundation dating to the early 1900s. The home sits close to the shore and has access to a garden.

Square in plan, the home consists of a single level that totals 650 square feet (60 square metres). The building is topped with a pitched roof that flattens out as it extends over a deck.

Exterior walls are clad in dark cedar and Richlite, a composite material made of resin-infused paper. Sliding doors help erase the boundary between inside and out.

Inside, the home is divided into two zones. One side encompasses the shared spaces  – an open kitchen and dining area, which is separated from a living room by a retractable sheer curtain.

The other side contains two bedrooms and a bathroom.

Glass doors are found in all rooms, except for the bathroom, and provide direct access to a wraparound deck. In the living room, a “zero post” corner opens the space fully to the outdoors.

Interior finishes include whitewashed pine and oak flooring. In the kitchen, stainless steel was used for the countertops and backsplash.

A light fixture above the kitchen island is made of concrete – the same material used for a pendant above the dining table.

The main bedroom is fitted with white closet doors, wooden panelling, built-in open shelving and a large, globe-shaped pendant. In the bathroom, the team clad the shower in white tiles.

In addition to floor-to-ceiling glass, the home has three skylights that bring natural light into the home.

“We sought to capture the poetic quality of light reflecting off the surrounding Portage Bay waters, an aspect heightened by overhead aluminium-lined sky vessels that softly reflect the colours of the changing sky,” the team said.

Other floating homes in Seattle include a two-storey dwelling by Vandeventer + Carlander Architects that is designed so residents can go swimming directly from their bedrooms.

Photography is by Kevin Scott.