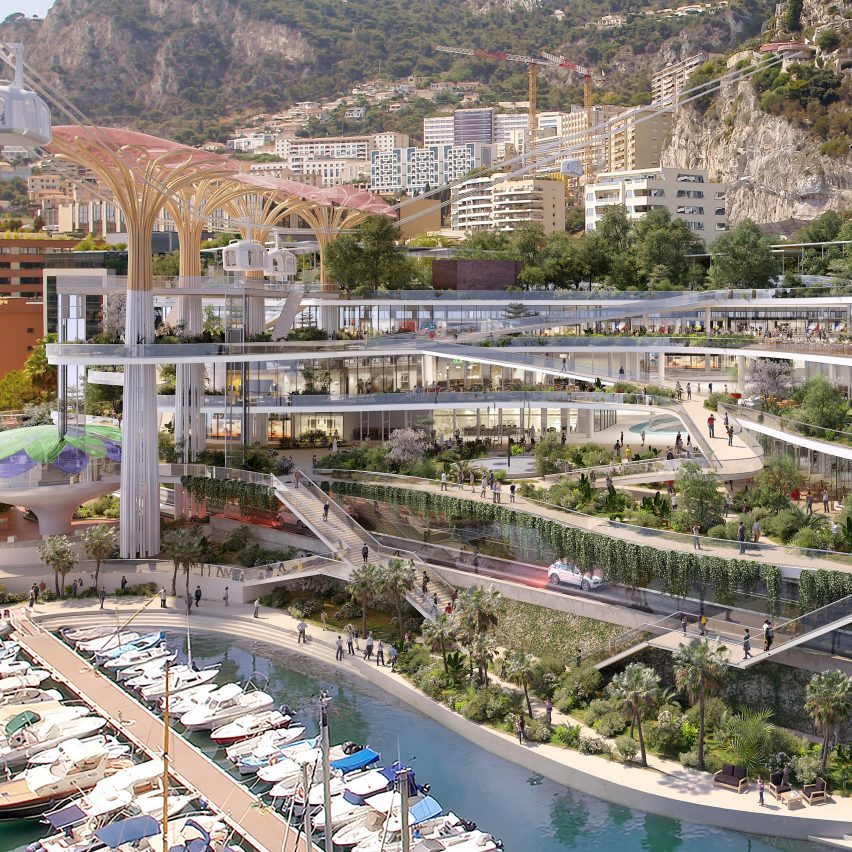 Studio Fuksas has unveiled plans for a stepped office and commercial building covered in plant-filled terraces, on the waterfront in Monaco.

Referred to by Studio Fuksas as “a vertical park”, the scheme will be built on the site of a shopping centre in the south of the city, and will stand alongside a cable car station being designed by Shigeru Ban Architects.

The building will contain a mix of cultural and commercial spaces spread over five storeys, which will open out on to a series of curved, linked terraces.

“The new Fontvieille site offers a contemporary, fluid and organic architecture,” explained the architecture studio. “The greening of the building introduces nature into the urban space, creating a new landscape up to the sea.”

Studio Fuksas’ building will be orientated to maximise views of the sea, and designed to “emphasise” the qualities of the surrounding landscape – including the Rock of Monaco.

From the ground to the fifth floor, its tiered facade will be connected by ramps and staircases designed to create a series of scenic walks for pedestrians. They will also link to the adjoining cable car being built on the site.

“The project directs the building to the outside, towards the horizon, creating new links with the environment and the natural landscape all around,” added the studio.

Inside the building, the interiors and furniture of each floor will be distinguished by a colour, also be informed by an elements of the landscape.

While the ground floor will be red to reflect the tiles of the historic centre of Monaco, the first storey will be sea-blue, and the second purple to resemble lavender. On the third floor, shades of ocher will be used to reference nearby buildings, and the fifth level will be finished in grey tones to echo the cliffs of Cote d’Azur.

Led by Massimiliano and Doriana Fuksas, Studio Fuksas is an award-winning architecture studio, which has completed more than 600 projects across the world.

The Fontvieille waterfront project is not the only building by the studio with a curved, organic form – it follows the Shenzhen Bao’an International Airport in China, and more recently its design for a new convention centre with wavy floors and a bulging roof.