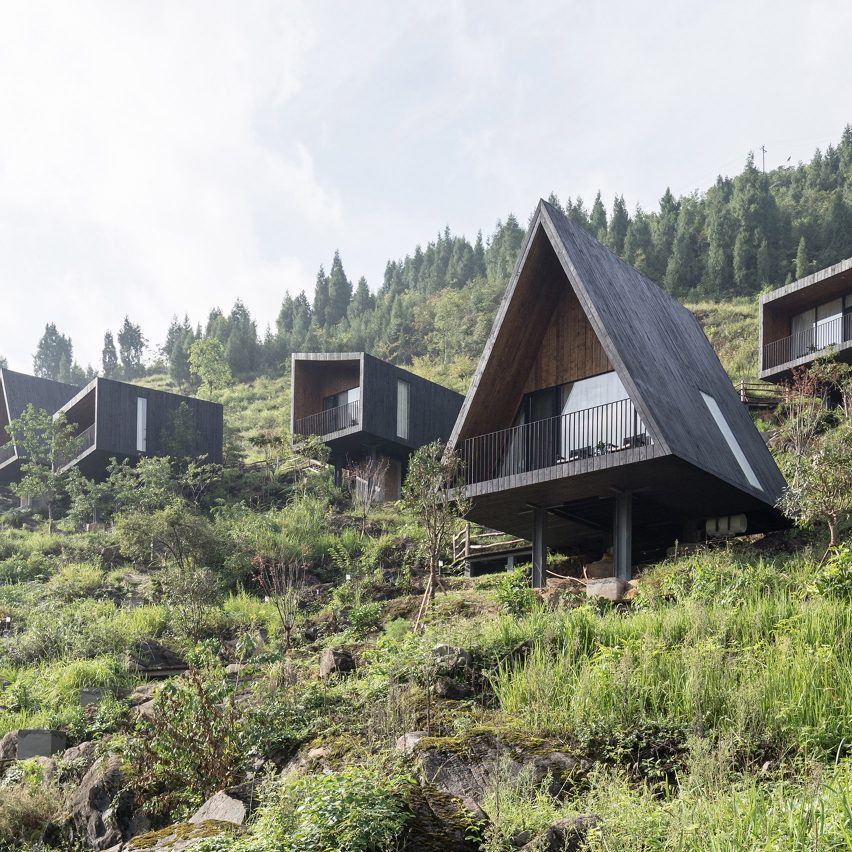 A new wave of hotels is offering guests the chance to sleep in individual cabins set amid spectacular landscapes instead of in a traditional building with corridors. Here’s our selection of 10 of the most interesting cabin hotels.

From China to Denmark, studios including ZJJZ Atelier, Sigurd Larsen and Snøhetta have designed hotels featuring individual rooms scattered across hillsides, within forests or on cliff tops.

Here, guests can get a taste of off-grid living while still being able to order room service. Read on for ten of the best cabin hotels from Dezeen’s archive: 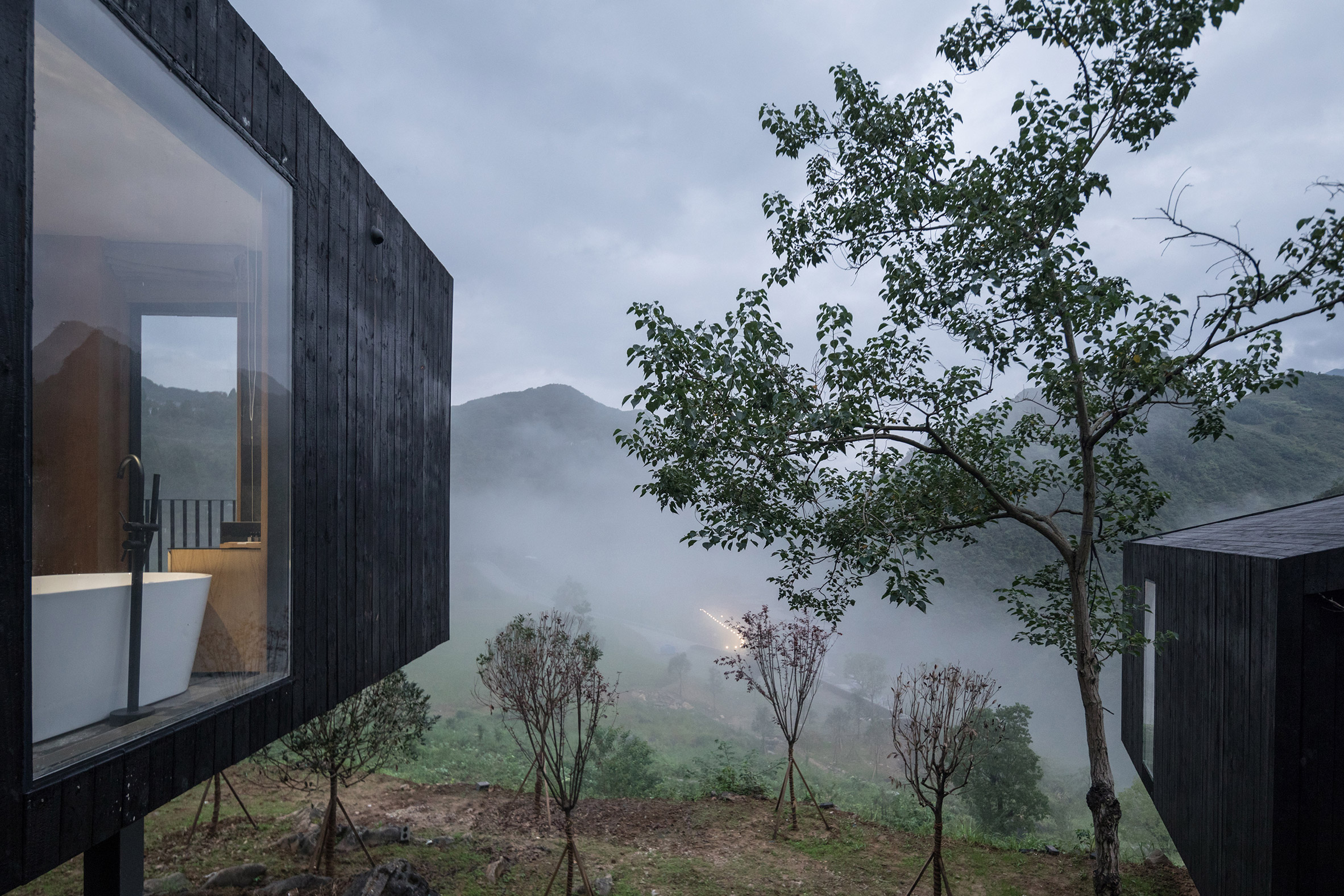 The Woodhouse Hotel by ZJJZ Atelier is made up of 10 wooden cabins scattered across a hillside side near the remote village of Tuanjie, China.

The studio designed the hotel, which consists of a variety of different shaped cabins orientated to take advantage of the views, as part of a government scheme aimed at introducing agricultural tourism to the area.

Find out more about The Woodhouse Hotel › 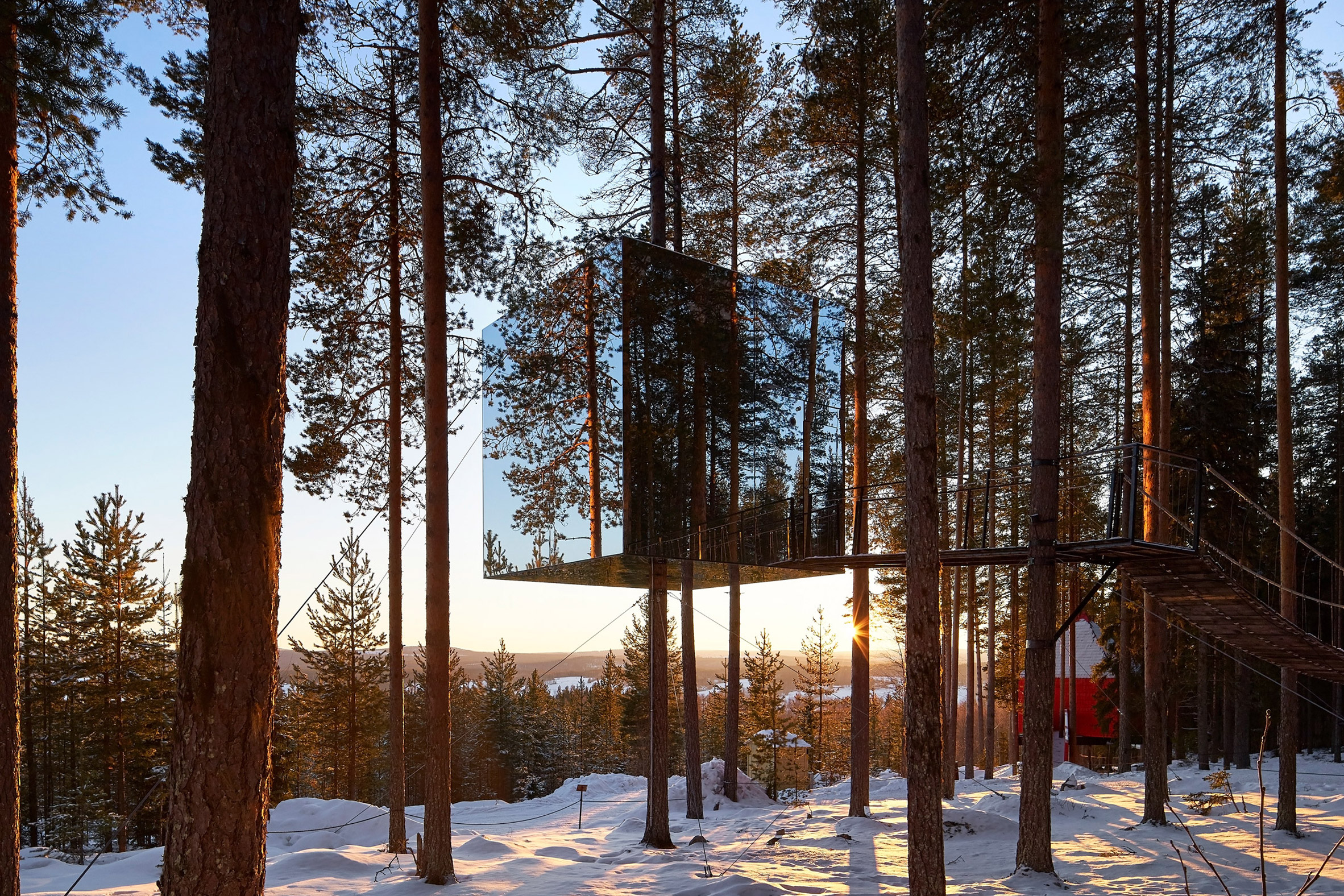 Hotelier Treehotel called on Snøhetta and Tham & Videgård Arkitekter, SandellSandberg as well as Inredningsgruppen to design various cabin suites for this hotel in northern Sweden.

Suites include a birds’ nest-informed cabin by Inredningsgruppen, a cabin by Cyrén & Cyrén’s that is only accessible by bridge, and a cabin clad in mirrors that allows it to blend into the forested surroundings, designed by Tham + Videgård.

Find out more about Treehotel › 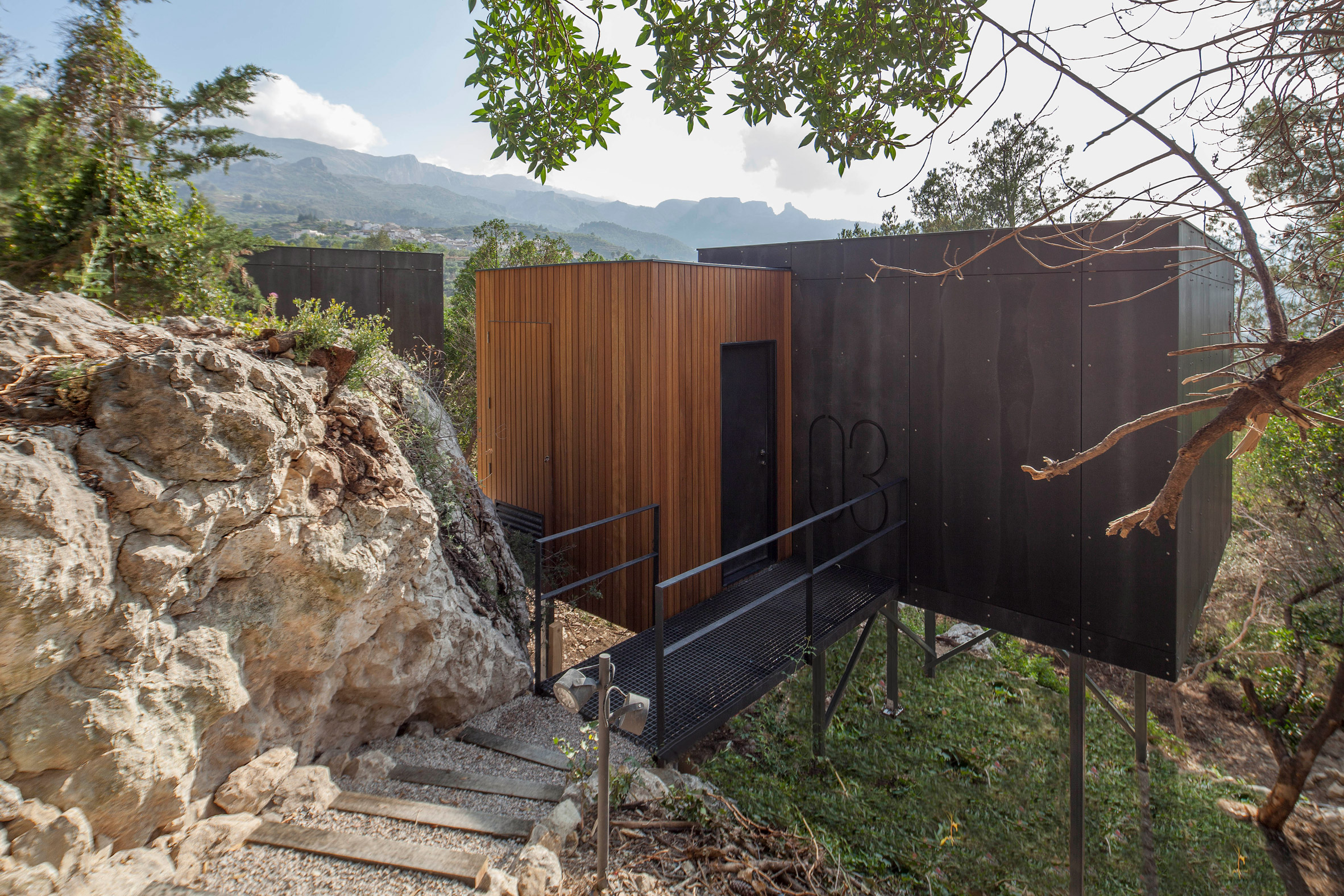 Raised above rugged ground near Alicante, Spain, Vivood Landscape Hotel is made up of a series of prefabricated cabins that boast views across to the adjacent valley.

It has 25 suites situated across a sloping site with pathways connecting the units and leading to a restaurant, lounge bar, a swimming pool, terraces and outdoor hot tubs. Daniel Mayo designed the cabins to encourage visitors to connect with nature. 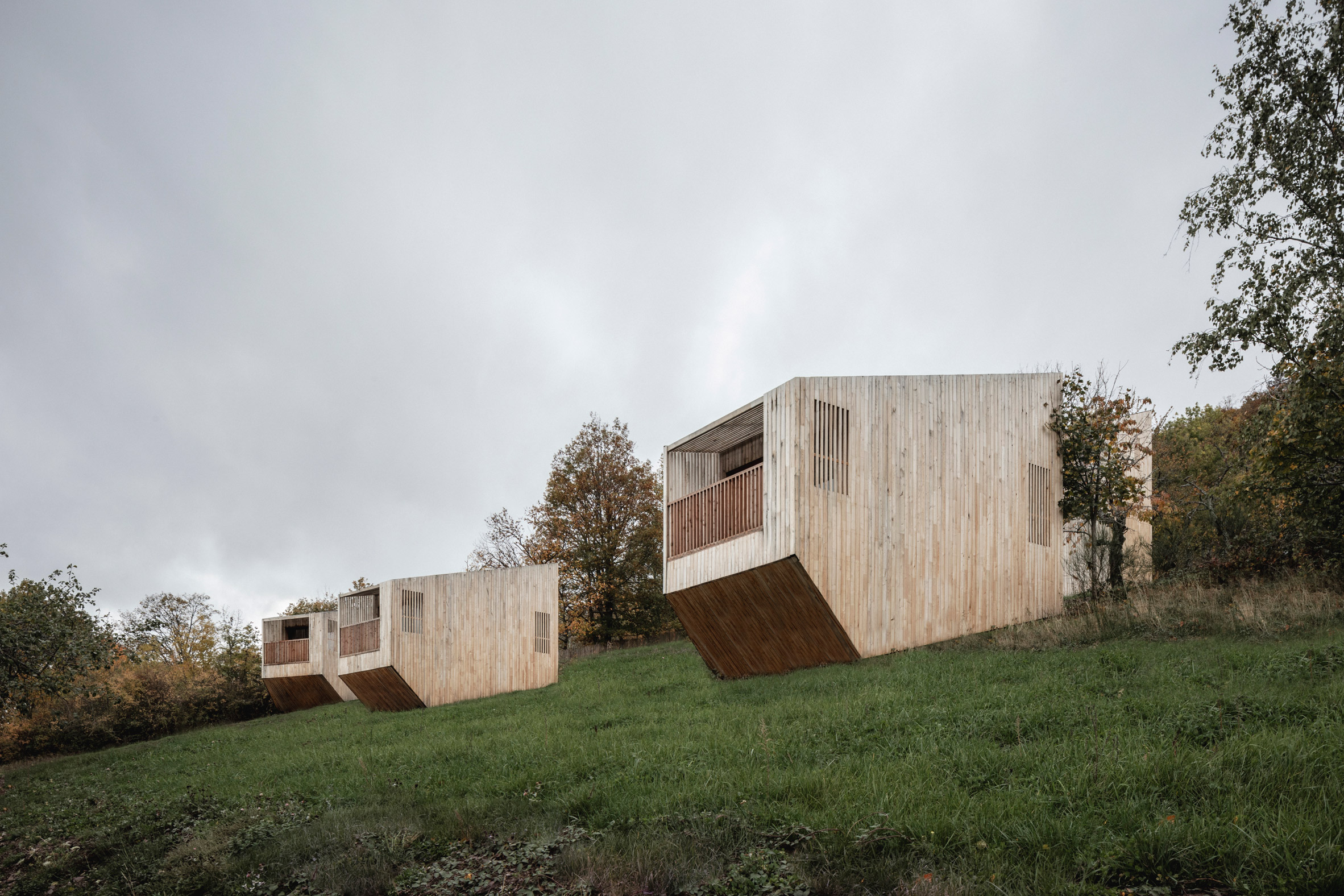 Reiulf Ramstad Arkitekter‘s 48° Nord France is an eco-hotel in France that features 14 cabins dotted along the hillside of a mountain village.

The designs were informed by small countryside cottages known as “hyttes” that are used for weekend getaways in Norway. 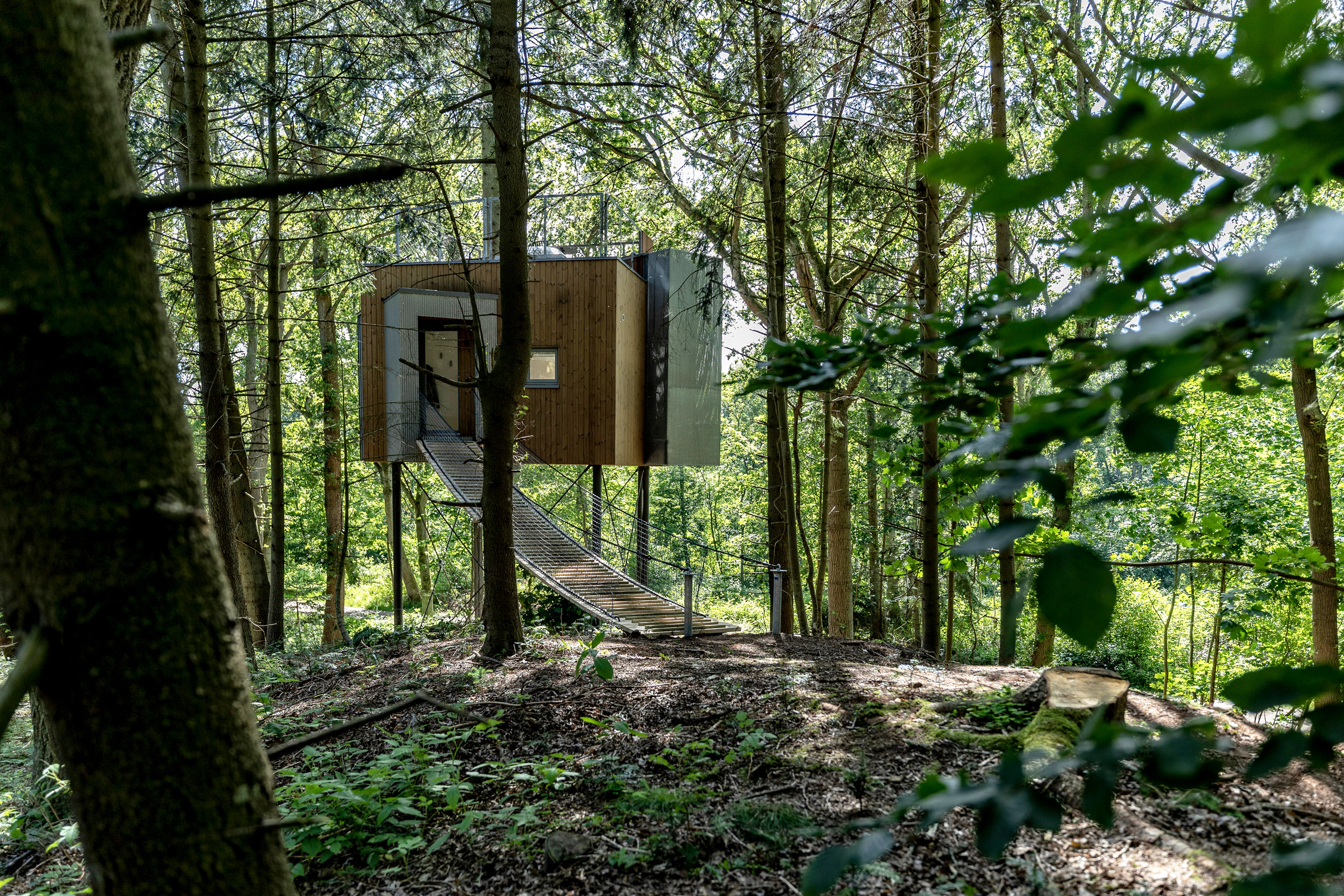 Created for treetop-hotel company Løvtag, this hotel-cabin is raised eight metres above the ground in a Danish forest.

Built as the first of nine cabins that will be clustered within the forest, Sigurd Larsen designed the suite to express “Nordic minimalism”. It is wrapped around a living tree, which acts as a centre point for the interior space.

Find out more about Løvtag’s Cabin › 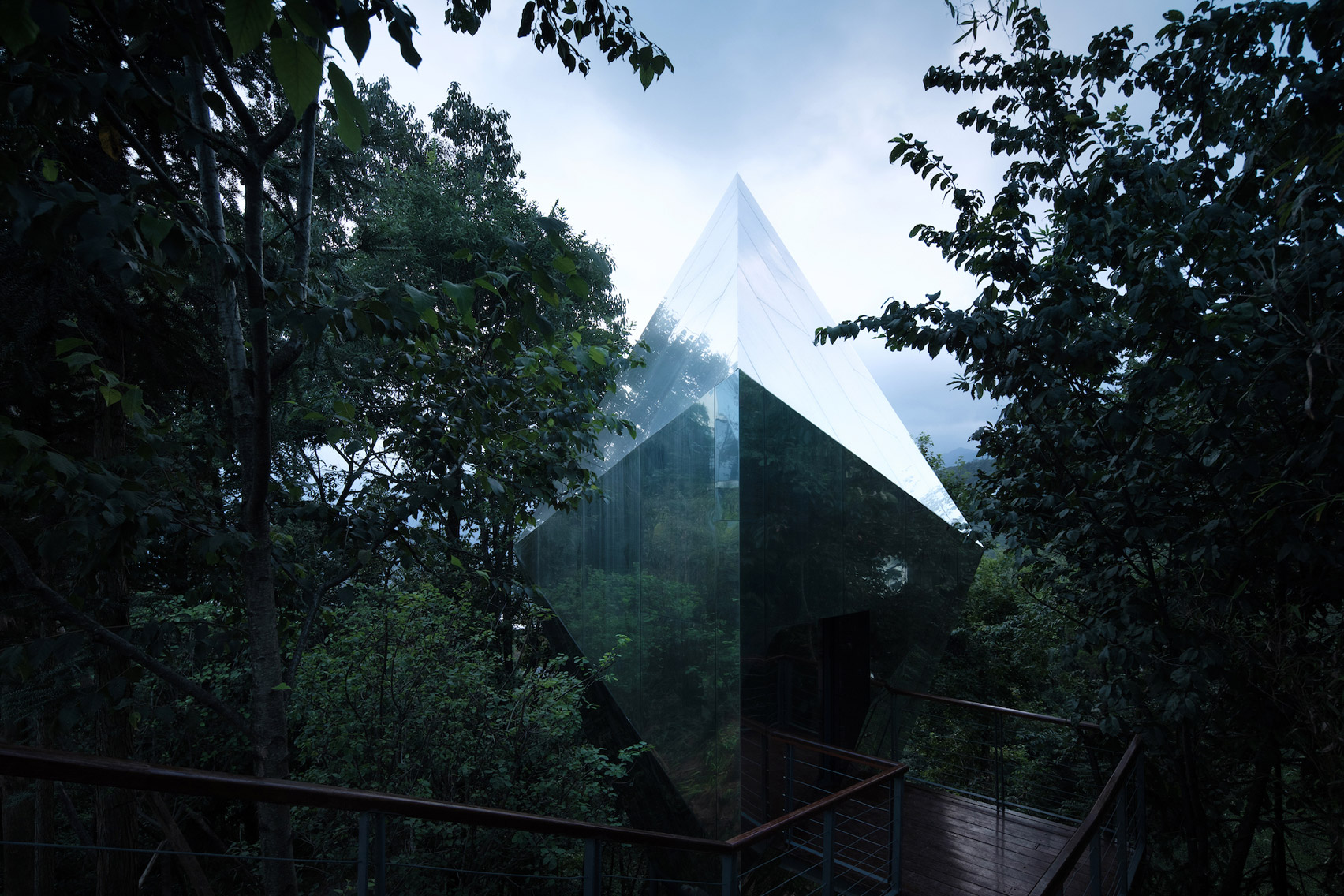 This hotel consists of 18 mirrored cabin-suites designed by Wiki World and Advanced Architecture Lab. In total there are five different cabin typologies, some with balconies suspended above tea fields, others with pointed forms perched further up the slopes of the mountain. Each cabin exists as its own hotel room.

Wiki World founder Mu Wei said he wanted the cabins to have a Nordic feel, informed by his time living in Norway.

Find out more about Mountain and Cloud Cabins › 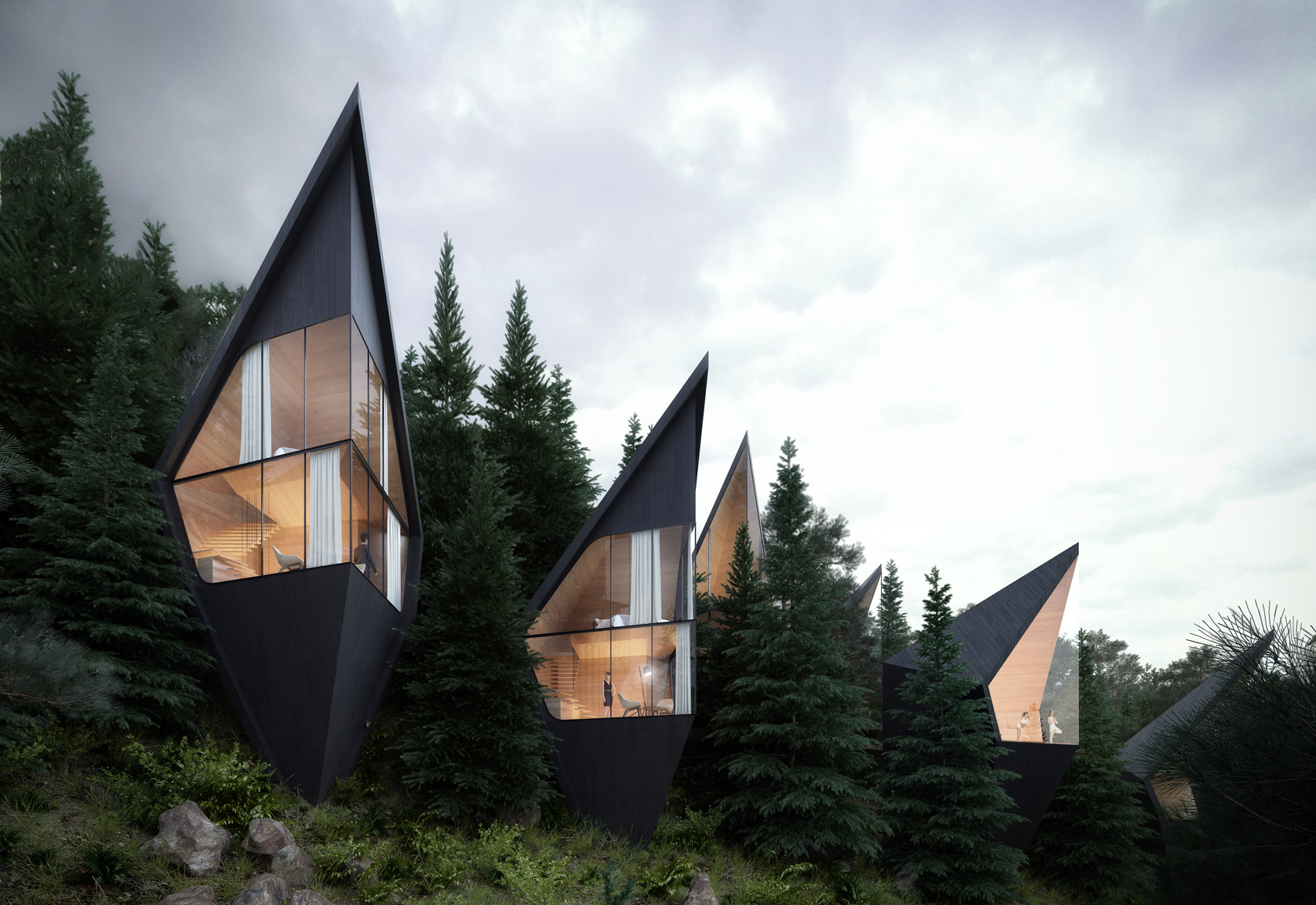 Milan-based studio Peter Pichler Architecture has revealed its design for the Tree House cabins in Italy, which will be built as individual hotel rooms.

Set to be built from locally sourced materials, the blackened wood cladding and steep pointed roofs are intended to echo the form and colour story of the fir and larch trees.

The cabins are designed over two levels, containing a sleeping area, bathroom, reading and lounge area, and are orientated to maximise views out of the floor-to-ceiling windows.

Find out more about Tree House › 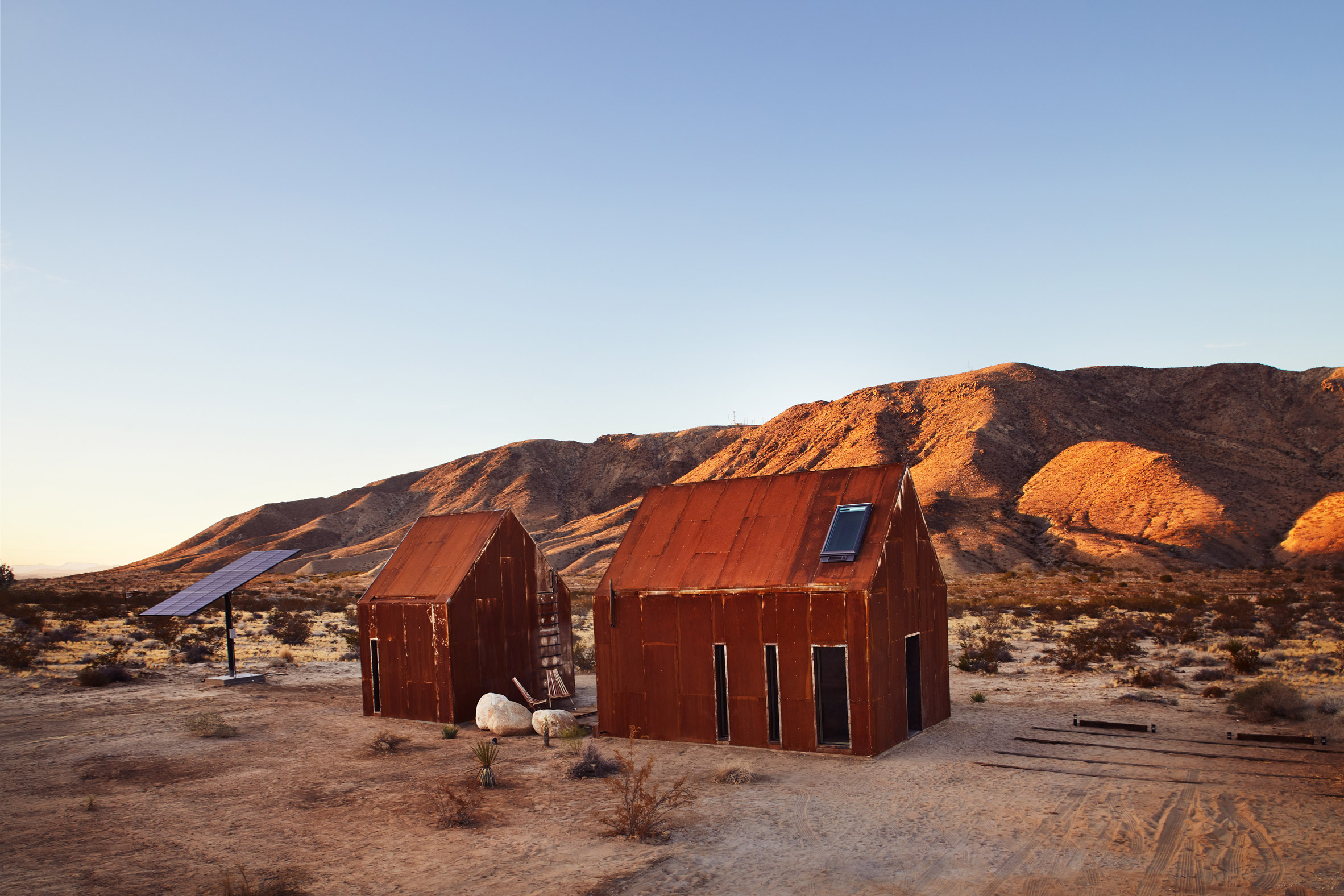 Folly, US, by Cohesion Studio

Cohesion Studio created this pair of weathering steel cabins that visitors can rent and use for glamping in Joshua Tree National Park. Designed without compromising on modern conveniences, the off-grid experience features an outdoor bath, open plan living, and a stargazing bedroom with no ceiling.

“This interactivity establishes a reference to what off-grid living is like, through automated creature-comforts that ‘break the ice’ to an off-grid lifestyle, without compromising the surrounding environment or guests’ expectations,” said Malek Alqadi of Cohesion Studio.

Find out more about Folly › 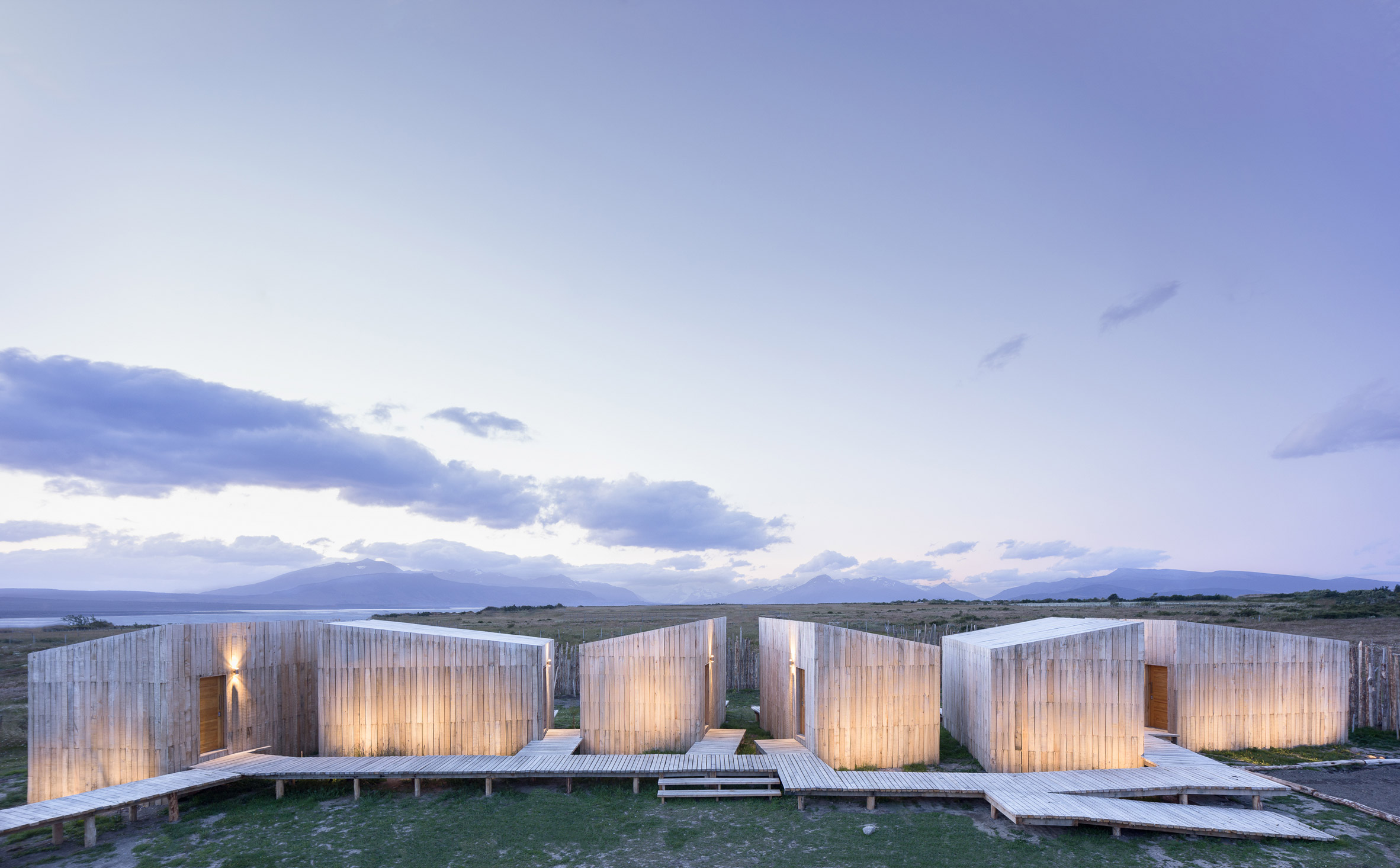 Larrou created the Aka Patagonia Hotel for a rural site in southern Patagonia. Made up of six mono-pitched roofed cabins, the hotel was designed to form an irregular roofline against the surrounding flat Chilean terrain.

All the guest cabins and communal areas were prefabricated and assembled on site.

Find out more about Aka Patagonia Hotel › 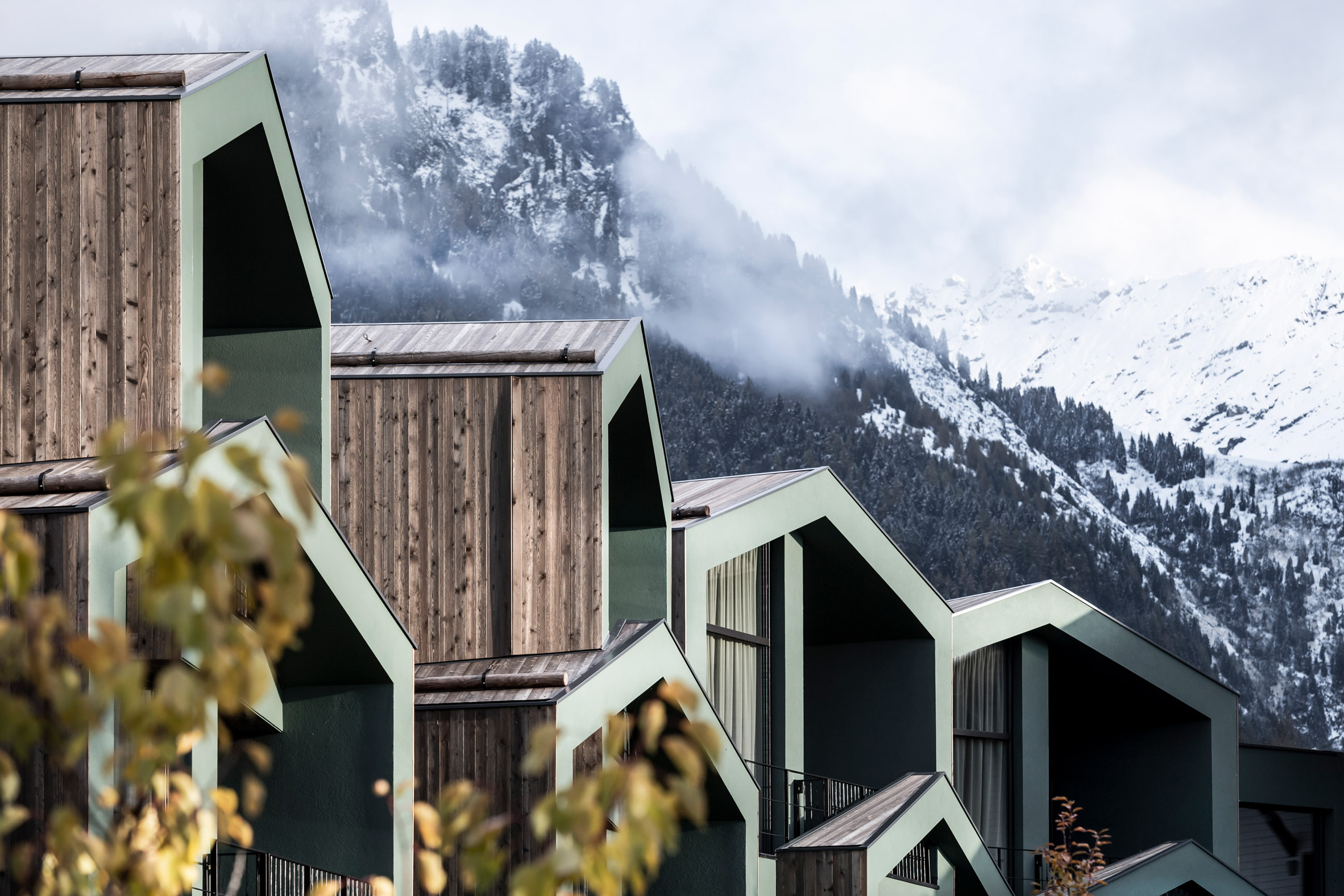 Floris, Italy, by Network of Architecture

Floris by Network of Architecture is a treehouse-style extension to an existing hotel located at the base of a mountain. The architecture studio wanted to create a structure that was not just a row of rooms but instead a group of self-contained treehouses, elevated three-metres off the ground.

Cabin volumes overlap to create the impression of a “natural, grown structure”, while the designs are linked through their use of weathered timber cladding and green-painted exteriors.

Find out more about Floris ›