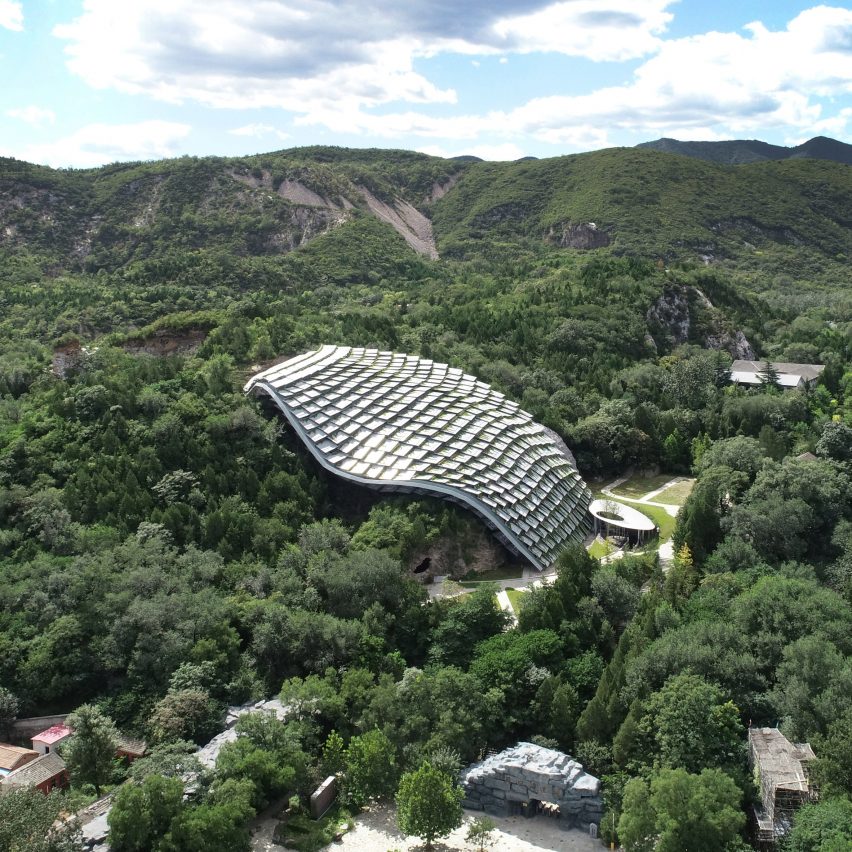 An undulating shelter has been constructed over the Peking Man cave, a historic site in China that is home to ancient human fossils, in an effort to protect it from weathering.

Designed by the Architectural Design and Research Institute of Tsinghua University (THAD), the shelter blocks rain and wind out of the cave, while also reducing fluctuations in temperature and humidity.

The cave is part of the Zhoukoudian Peking Man Site near Beijing, which has yielded a number of significant archaeological discoveries including a collection of fossils of Homo erectus skeletons dating back 750,000 years that are known collectively as Peking Man.

THAD‘s shelter, which was completed in 2018 but photographed recently, was commissioned after a severe rainstorm led to the cave system being damaged by flooding.

“The site is not only an exceptional reminder of the prehistorical human societies of the Asian continent but also illustrates the process of evolution,” explained THAD.

“The semi-closed structure was adopted to maintain the natural condition of Peking Man cave as a buffering space that protects it from the uncertainties.”

While providing environmental protection, the Peking Man cave’s shelter is designed to blend into its verdant site and also provide space for scientific work and observation.

It was designed parametrically and then prefabricated to ensure its structure is as minimal as possible and can be removed with minimal disturbance to the site at a later date.

The shelter comprises a steel structure and a double-layer skin made up of 825 panels that create a buffer to reduce changes in temperature and humidity.

These panels are positioned in an overlapping arrangement to ensure efficient rainwater drainage. Small gaps between them allow fresh air and daylight to enter.

The panels cover an area of about 3,700 square metres, spanning over 54 metres in width and over 77 metres in length.

It is supported only by two rows of foundations, which are placed on flat rock formations at the north and south of the cave.

Externally, the structure is designed to evoke part of the landscape. The outer panels, which are made from aluminium, incorporate planters to help them blend into the site.

Its undulating form is modelled on estimates of the original geography of the landscape before it collapsed to form a cave.

“The morphology of the mountain before the collapsing of the Peking Man Cave was deduced from clues as contour lines of the current landform to shape the overall form of the shelter,” explained THAD.

“The new structure was consequently able to blend with its immediate surroundings.”

Internally, the panels are made from fibreglass and finished with textured surfaces that emulate the rockfaces inside the cave.

As part of the project, the Peking Man cave has been fitted with two new platforms for observation and an elevated footpath. These walkways link to an existing ramp and steps leading in and out of the cave.

A series of digital displays have also been introduced, which project details about excavation processes and research findings on the walls of the caves for visitors to read.

Elsewhere, THAD has also recently completed a campus for Yan’an University in China that is intended as a contemporary interpretation of cave dwellings in the area, which are dug into sandy sediment cliffs.

Other architecture projects involving caves include Clayton Korte’s creation of a wine cellar in a limestone cave in Texas and Jean Nouvel’s design for a subterranean hotel in the AlUla desert in Saudi Arabia.