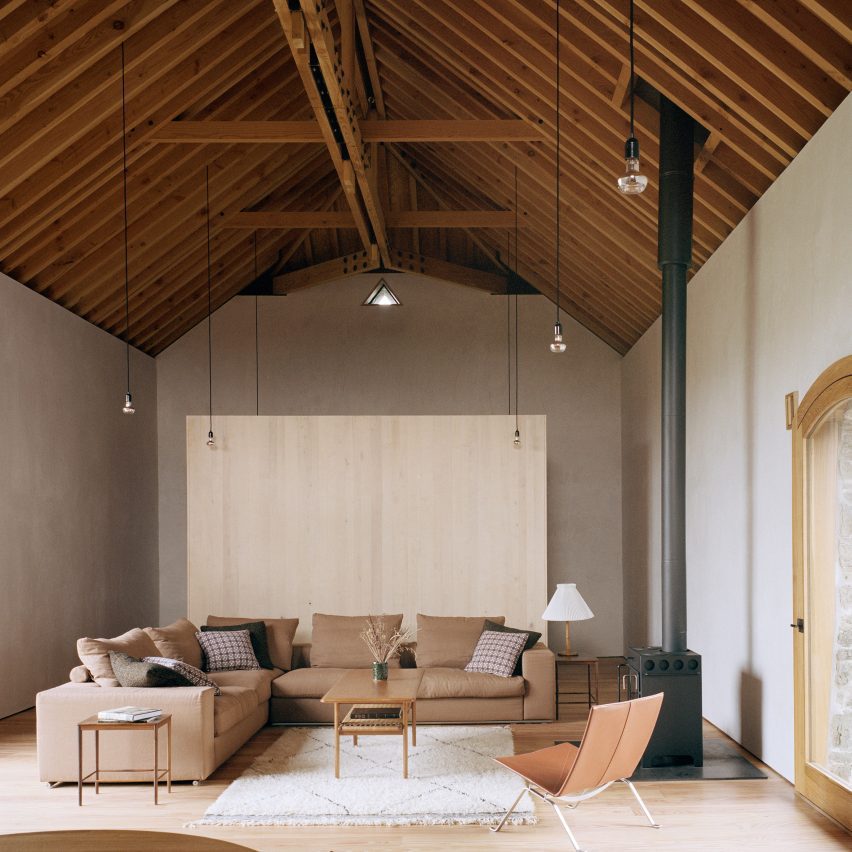 Architecture studio TYPE has converted the dilapidated Redhill Barn in Devon, England, into a house that retains its 200-year-old stone walls.

London-based TYPE oversaw the conversion of Redhill Barn, which occupies a secluded spot within a 25-acre site that was previously part of a large farming estate, as part of a wider project to turn the agricultural land into an ecological smallholding.

The 199-square-metre home was originally constructed in 1810 as a threshing barn and cow byre.

Prior to its renovation, the barn had fallen into a state of disrepair, with its roof missing and the remaining stone walls overgrown with weeds.

Throughout the renovation, the architecture studio aimed to preserve the exemplary work of agricultural engineering while creating an appropriate home for modern family living.

“We wanted to restore the building’s character in an original way and to be very clear about what was old and new, retaining the weathered beauty of the monumental stone shell and wild agricultural setting,” said TYPE.

“We wanted to show this when viewed in the landscape, reinstating the hipped roof with milled aluminium sheeting to ‘ghost’ the original roof form in a light, reflective material.”

The design strategy retains the building’s stone walls and uses the existing openings as they were found, with all interventions located within the original envelope.

Windows with simple frames were set back into the deep reveals to allow the maximum amount of light to enter.

The wide openings originally created for cattle now incorporate arched pivot doors to retain a connection with the outdoors.

The house’s floor plan is informed by the barn’s internal stone columns. These support a new floor and roof structure made from Douglas fir that is designed to evoke the rhythm and simplicity of traditional agricultural buildings.

“The roof truss spans lengthways,” the studio added, “utilising small section timber and steel connections, allowing the structure to sit higher than a conventional truss and stressing the height, form and scale of the space.”

Freestanding elements constructed in English sycamore are used on both levels to define and serve the main rooms while retaining the overall volume and rhythm of the spaces.

The cellular arrangement of the ground floor contains two bedrooms, a bathroom and a kitchen, each with arched doors framing views of the landscape.

The upper floor contains an open living and dining area that is bookended by freestanding units separating this social space from a study at one end and a shower room at the other.

The material palette used throughout the project seeks to complement the original stone and lime plaster walls and columns while distinguishing these existing elements from the new interventions.

In addition to overseeing the architecture project, TYPE was involved with all interior work as well as the ecological landscape design, which includes the creation of a vegetable garden, wildflower margins, copses and an orchard.

An access track was introduced to the previously inaccessible site, while services including water and electricity are now provided along with an air-source heat pump for heating the house.

“Redhill Barn has afforded us the unique opportunity of leading the design and construction of one of our projects,” said TYPE’s director Tom Powell.

“The project reflects the ethos of our practice and our holistic approach, which includes working with the landscape, building, interiors and furniture design, and takes into account all details, from how individual stones are placed to how the door handles are shaped.”

TYPE was founded by Powell together with Sam Nelson, Ogi Ristic and Matt Cooper in 2013.

Elsewhere in England, Turner Works converted a dutch-style barn in the Cotswolds into a holiday home while Sandy Rendel Architects converted a barn in Sussex and clad it in corrugated steel.

Photography is by Rory Gardiner.

The post TYPE transforms stone barn into home in the English countryside appeared first on Dezeen.