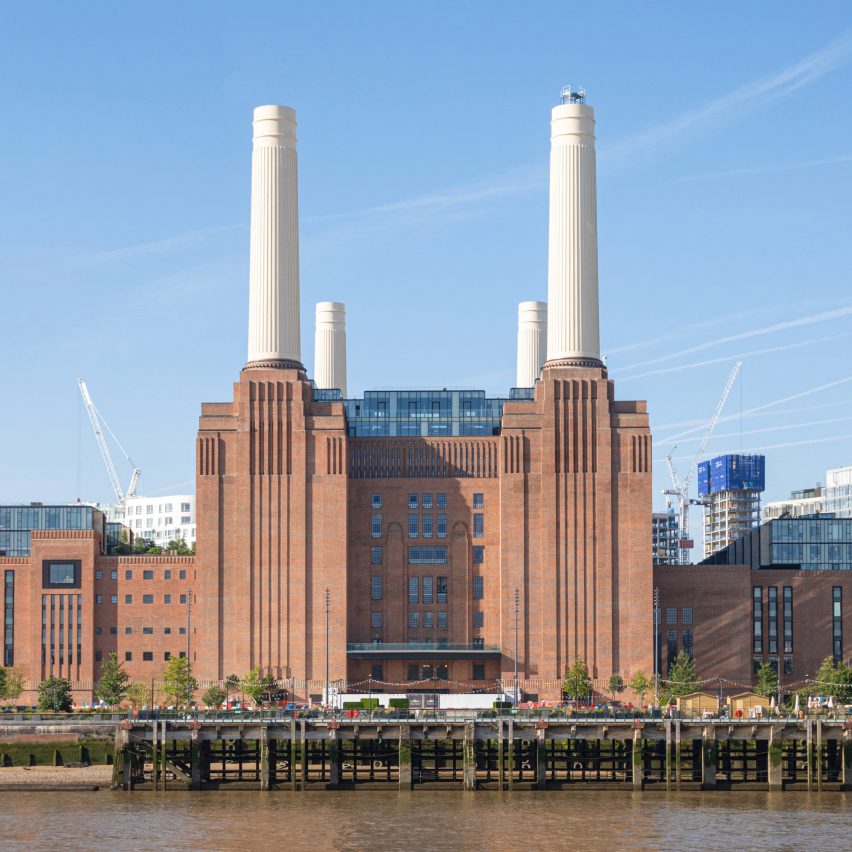 Architecture studio Wilkinson Eyre has unveiled the redeveloped Battersea Power Station in London ahead of its opening next week, almost 40 years after the building was decommissioned.

The former power station, which now contains over 100 shops, 46,000 square metres of office space for technology brand Apple and 254 apartments is set to officially open to the public on 14 October.

Designed by British architect Giles Gilbert Scott, Battersea Power Station was originally opened in the 1930s before later being expanded to create its distinctive four-chimney-form that sits alongside the River Thames.

After it was decommissioned between 1975 and 1983 it remained empty for almost 30 years before being redeveloped by WilkinsonEyre as the centrepiece of a new commercial and residential neighbourhood in Battersea.

WilkinsonEyre aimed to retain and emphasise as many of grade II* listed power station’s original spaces and materials throughout the design, while logically organising the large building’s various functions.

The lowest three levels of the building have been converted into a large shopping centre containing 100 shops and numerous cafes and restaurants.

It is accessed through a square designed by Danish studio BIG, which leads to an entrance hall with a full-height atrium set behind the building’s original retained wall.

Escalators in this entrance hall lead up to the office space at the centre of the building, which will be occupied by Apple and complete next year.

The shopping centre occupies both the building’s main turbine halls that are located on either side of the central boiler house.

Within the 1930s Turbine Hall A, three tiers of shops surround a central atrium that is topped with a glass and steel skylight. 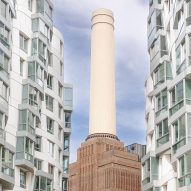 The space’s original columns were restored, with dark-coloured steel frames placed between each one to give the shop facades a unified appearance.

An “S” motif was imprinted on the balustrades as a nod to an original pattern that appeared on the building’s steelwork while a brick outline of the turbines was created on the ground floor.

The later 1950s Turbine Hall B has a slightly different and “more industrial” aesthetic to align with the later construction. In its roof, all of the circular extraction fans have been replaced with light tunnels to allow natural light to enter the space, while a gantry crane supports a fully-glazed box that will be used as an event space.

Connecting the two main shopping galleries will be a food hall that is set to open next year.

Alongside each of the turbine halls, the original control rooms have been refurbished.

Alongside the offices and retail spaces created in the lower and central areas of the huge building, 254 residential apartments were added around the edges of the structure and on top of the original building.

Two floors of penthouses top the Boiler House surrounding a central garden while Switch House West and Switch House East on either side of the building have been converted to homes and also topped with duplex penthouses.

In the apartments located within the building’s original structure the original brickwork and steels have been left exposed. The interiors were designed by architecture studio Michaelis Boyd, which created more than 100 different layouts for the flats.

The studio created two distinct materials palettes for the homes one that references the 1930s and one the 50s.

Alongside the residential, retail and office space, the development will also contain a visitor attraction set within one of the building’s chimneys, which were all rebuilt as part of the project.

Named Lift 109, the tourist attraction will have a glass lift that rises 109 metres through the chimney to give views across London.

Battersea Power Station sits at the centre of a wider development that has seen buildings completed by Foster + Partners and Gehry and Partners.

The photography is by Hufton & Crow.