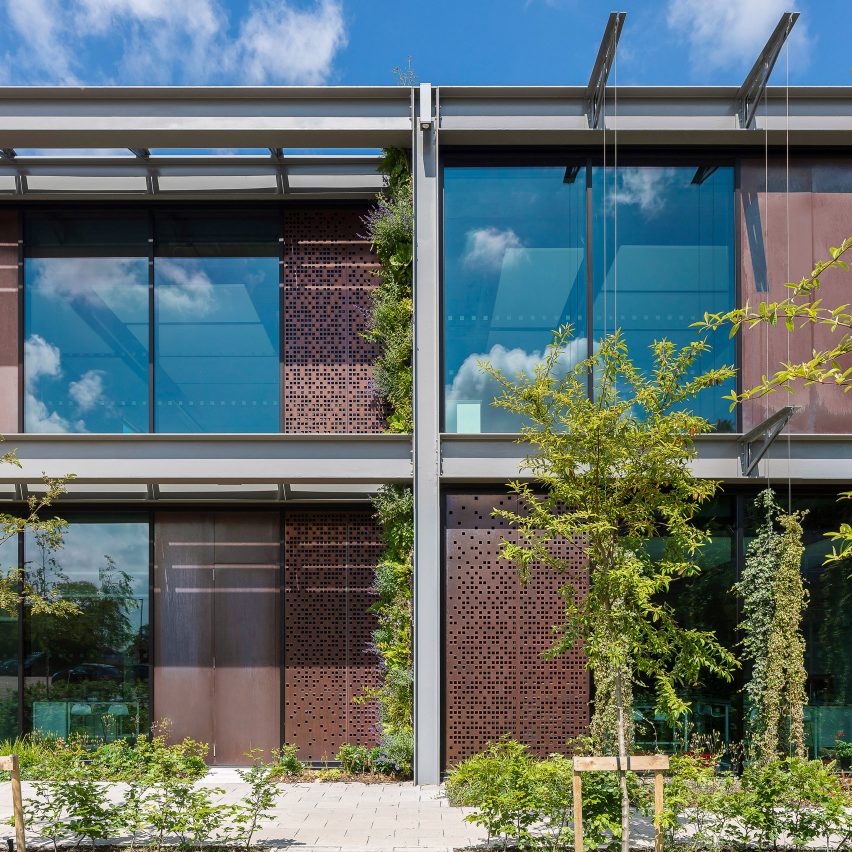 An exposed steel structure and perforated copper cladding bring an industrial feel to The Dyson Building at Gresham’s School in Norfolk, designed by architecture studio WilkinsonEyre.

The new centre for science, technology, engineering, arts and mathematics (STEAM) at the independent day and boarding school was made possible by an £18.75 million donation from James Dyson.

Facing the school’s 20th-century chapel and surrounded by green lawns and playing fields, The Dyson Building has been designed with several teaching spaces that can be opened up to the surrounding campus.

According to WilkinsonEyre, it is intended to encourage collaboration and exchange.

“Designed to create a feeling of openness, the new building and its surrounding campus seeks to promote new approaches to teaching, encouraging project work and collaboration,” it continued.

The Dyson Building is organised around a central skylit atrium containing an arts hub and IT centre, as well as a wide “auditorium staircase” that provides seating and connects its two floors.

Around this atrium is a grid of teaching areas organised so that the majority have views out to the surrounding campus. 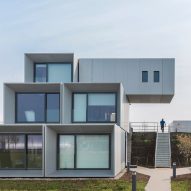 The grid-like arrangement of classrooms is visible on the steel-framed exterior, where a mixture of perforated oxidised-copper panels, full-height glazing and set-back areas create varying internal conditions.

Thin metal wires for climbing plants have been fitted to the external steel frame to help the building gradually blend in with the landscape over time, while the perforations in the copper panels mirror the adjacent chapel’s flint work.

“Some of the panels are set back to accommodate landscaped open areas which can be used for outside teaching, while integrated planting blurs the boundaries between outside and in.”

The naturally ventilated interiors are finished with a mixture of white walls and plywood-lined surfaces and designed to have a “visual permeability” that will encourage interaction and collaboration between disciplines.

Completing The Dyson Building are solar panels on the roof and ground source heat pumps to provide renewable energy.

WilkinsonEyre was founded by Chris Wilkinson in 1999 with Jim Eyre.

It has previously completed a student housing project for the Dyson Institute of Engineering and Technology in Wiltshire, designed as a stack of prefabricated timber pods.

The photography is by Peter Landers.