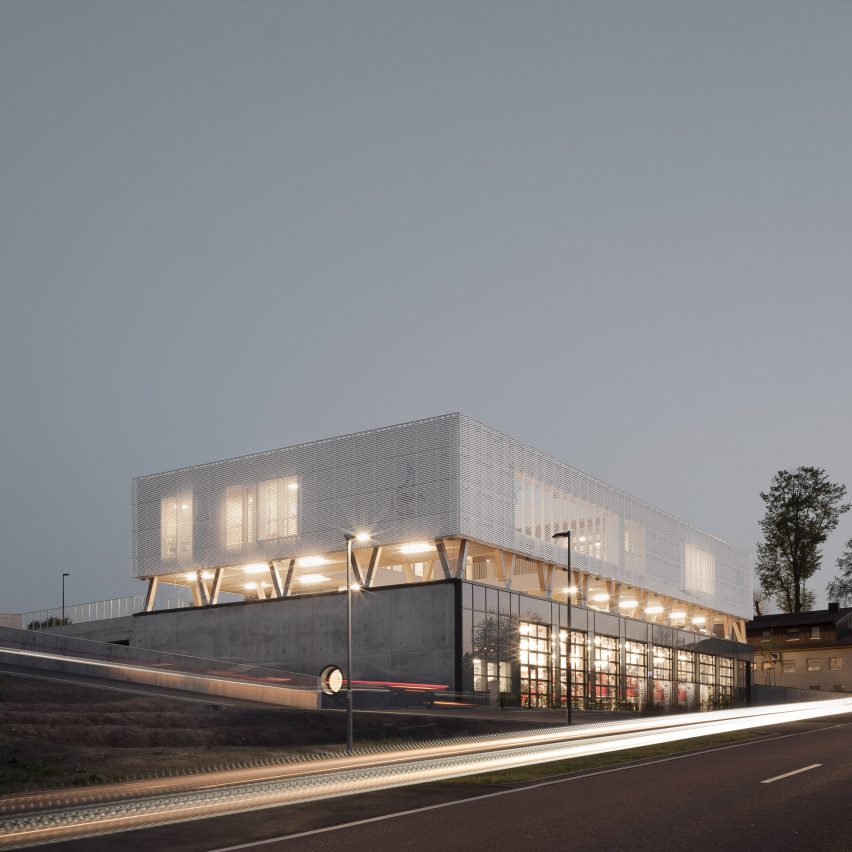 A lightweight upper storey clad in perforated metal is elevated on timber beams above a concrete podium at this fire station in Straubenhardt, Germany, designed by local practice Wulf Architekten.

Combining six previously independent firefighting units, the building’s different functions are separated by its stacked form. The garages are in its base with classrooms and offices raised above and an open-air events space occupying a space between the two.

The exposed concrete base is dug into the sloping site, fronted by a metal-framed wall with a series of large, glazed rolling doors for fire engines and service vehicles and featuring porthole-style windows along its sides.

A ramp wraps around to the rear of the site, which is level with the station’s open-air central storey, providing level access into the events space, which also has a parking area.

A staircase leads to the timber-framed upper level, which houses shared spaces, classrooms and offices and is wrapped in a cladding of white perforated metal panels.

In the centre of this upper level is a void, allowing it to overlook the spaces below through windows and from an external terrace space.

“The separation and stacking of the individual functional levels and the use of the site’s sloping terrain are part of the fundamental design concept,” explained Wulf Architekten.

“As a result, the sealed soil surface could be minimised and, moreover, the building structure nestles harmoniously into the topography.”

“[It is] clearly recognisable from the outside, creating a distinctive appearance that establishes a strong identity,” it continued. 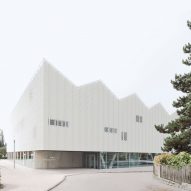 V-shaped beams run around the edge of the station’s open-air centre, finished in a combination of concrete and wood mark the transition from the heavier podium level to the lighter upper storey, and a thin metal mesh surrounds the exterior edge.

To the east, a distinctive drill tower finished in exposed galvanised steel cuts through the horizontal form of the building.

Intended to be an example of cradle-to-cradle design, wherever possible the building’s materials were recycled and low in harmful substances, with the wooden structure of the upper storey designed to be easy to dismantle and reuse in future.

Wulf Architekten was founded by Tobias Wulf in 1987 and has offices in Stuttgart, Berlin and Basel. Previous projects by the practice include a sports centre in Überlingen with a zig-zagging roof informed by the alps.

Other recently-completed fire station projects include a station in Brooklyn with bright red accents by Studio Gang, and a station by Happel Cornelisse Verhoeven in Antwerp finished with red glazed bricks.

The photography is by Brigida González.