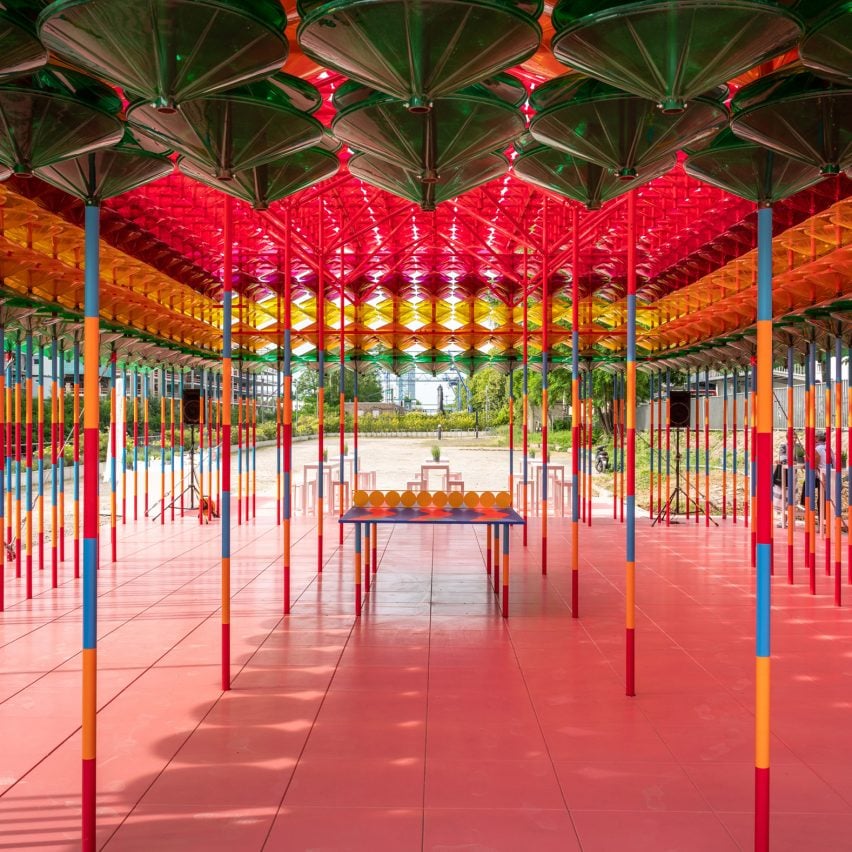 London designer Yinka Ilori has created a colourful pavilion named Filtered Rays as an events space for the Estrel Berlin hotel in Germany.

Located on the banks of the Spree alongside Estrel Berlin in the Neukölln area of the city, the pavilion is the Ilori‘s latest brightly coloured public intervention following his recent skatepark in Miami Beach and pedestrian crossings in London.

Named Filtered Rays, the pavilion was designed to be a bright space that encourages people to see the world outside in a fresh way.

“I wanted to forge a space that could bring people together, to create a meditative and reflective experience but also a space where people could come together to engage in conversation and create new memories,” Ilori told Dezeen.

The translucent overhead canopy was constructed from numerous polytetrafluoroethylene (PTFE) discs that were supported on a structure built from re-used scaffolding poles.

“We wanted to allow people to reimagine their relationship with space and the outside world,” said Ilori.

“We did this using a canopy of layered, coloured cones that would create a filter for their view of the exterior,” he continued.

“We used PTFE vacuum moulded into cones which could be layered and would remain transparent, allowing visitors to view the outside. This allowed me to play with light and colour and create an experience that is fresh and exciting.”

Like almost all of Ilori’s work, the pavilion is brightly coloured as the designer sees colour as a powerful tool that can play a significant role in influencing our wellbeing.

“It’s a colourful pavilion with a purpose,” he explained. “Colour for me has many uses in architecture and space and can really enhance your experience but also importantly enhance your mental health.”

“One of my inspirations for the space was Chromayoga which uses light and colour therapy to stimulate your senses, calm you down or uplift your mood and energy,” he added.

The pavilion was designed for Estrel Berlin, one of Europe’s largest hotels, as a permanent events space, which will be used to host a programme of creative workshops, ranging from yoga and meditation to dance and art during July and September.

Although the pavilion was designed to be permanent, Ilori made it to be demountable so that it could be dissembled and moved to another location. Both the reclaimed scaffolding poles and the modular cones can be easily taken apart and repurposed.