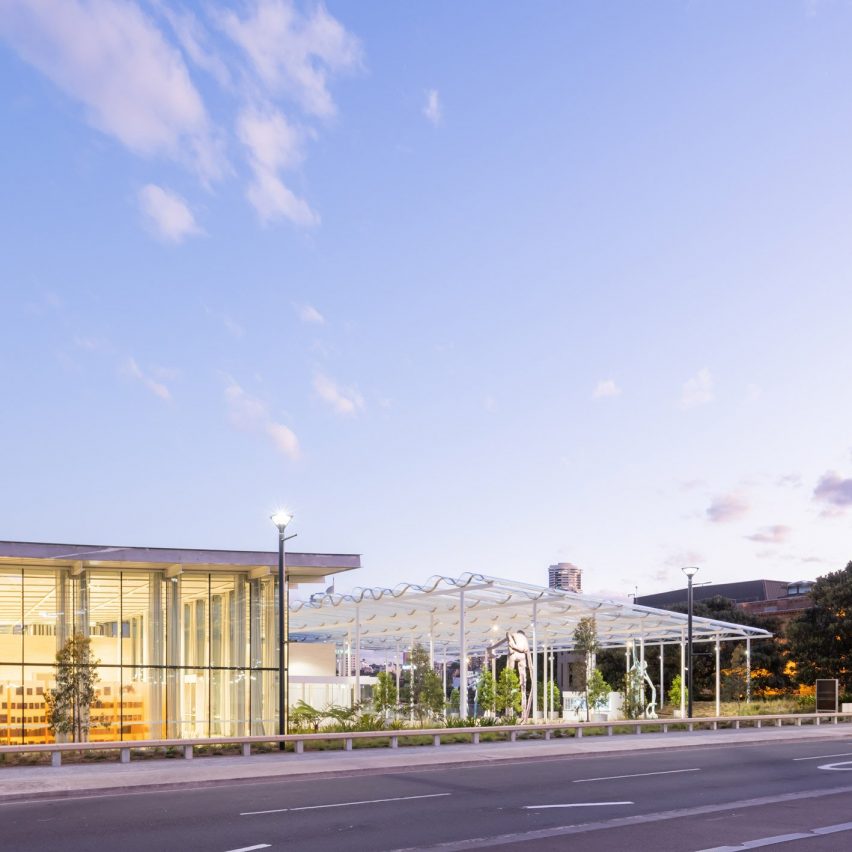 Pritzker Architecture Prize-winning studio SANAA has extended the Art Gallery of New South Wales with a series of pavilions that step down towards Sydney Harbour. The building, called Sydney Modern, is powered entirely by renewable energy.

The £191-million project has been described by state officials as the city’s “most significant cultural development” since Jørn Utzon‘s Opera House opened almost 50 years ago.

“It’s impossible to understand architecture by observing a few images”

Apsco Radiales was among a handful of commenters who weren’t impressed. “There are shapes, there are planes, there are massings, there are things flying all over the place. Where is the harmony?” they asked.

Puzzello looked at the criticism in a more historical context, saying: “The same negative responses were fired at the Sydney Opera House at its initial opening. This building is more about circulation and experience. You don’t hire SANAA to make a form-based landmark.”

Local resident Chris said “living very nearby and seeing it first hand, its connection to its context is very well conceived. Overall a very welcome addition to Sydney’s cultural scene”.

Some commenters were most excited about the Tank space – a world war two naval fuel bunker that has been converted into a 2,200-square-metre exhibition space.

Franc Lea reflected that “it is a gloriously historic, evocative and totally non-White Cube space that acts as a counterpoint to the new above – and with the intervention of the dramatic stair, provides an exciting space for installation and performance.”

“It acts amazingly as a transitional space to slow your pace down,” commented dddvvvnnn.

Luther Blissett argued that “SANAA’s production is always controversial – not fully provocative, not fully innovative. But one fact must always be remembered: it’s absolutely impossible to really understand architecture just by observing a few images”.

Do you think visiting Sydney Modern would change your perception of it? Join the discussion ›

Zaha Hadid Architects’ has revealed its masterplan for Ukraine’s World Expo 2030 bid. The design, created for the city of Odesa, is focused on four large central pavilions that would provide 80,000 square meters of exhibition space for the event.

“Hopefully, Putin will be gone soon enough so that they can start building this,” commented Apsco Radiales.

But Jack Woodburn was less hopeful, saying “Ukraine still will be rebuilding from whenever the war ends. How would it possibly be able to host an event like this in seven years?”

Ralph Kent was cynical about this sort of event being relevant in the first place. “When is anyone going to be bold enough to call time on the banal and sustainability-moribund junkets that are ‘World Expos’? It’s 2022, not 1851.”

Regardless of the viability of the World Expo, Valentin thought that ZHA’s design “feel disconnected from reality”.

Odesa4Peace didn’t think that’s a bad thing, commenting “ZHA’s work is always disconnected from reality. It evokes an astonishing world of visual elegance. I hope we can all, one day, visit my ancestral home of Odesa in peace and amazement.”

What do you think of plans for the World Expo in Odesa in 2030? Join the discussion ›

JZ thought the architects “certainly didn’t spare any expense and they managed to not be obnoxious about it”. GW agreed that “the design is very good”.

Marius appreciated how it is “well planned, well built” and Steve Hassler applauded the project, saying “Bravo. This might be perfect”.

Jb sounded a rare note of dissent, saying “this is decades out of date.”

Do you agree with the comments so far? Join the discussion ›

British architecture studio Foster + Partners is designing a six-runway airport in Riyadh, Saudi Arabia, which is set to become one of the world’s largest airports.

The practice plans on powering the airport using renewable energy and incorporate “cutting-edge green initiatives” into its design.

B wanted to know: “Does the future projection of flights to and from Saudi Arabia justify a massive airport like this? “

Zea Newland was critical of how the project will be built: “When scrutiny and accountability kicks in 10 years later, it will be too late. Solar-powered air conditioning in the terminal won’t make a difference then”.

Bsl thought it was obvious that “Saudi Arabia isn’t spending billions of dollars on renewable just to impress you, they actually want to make it work.”

“Saudi Arabia is investing heavily in becoming the largest manufacturer of green hydrogen to leverage the shift to zero emissions transportation worldwide. Saudi is also investing in solar and wind electricity infrastructure and charging stations for electric cars, all in an effort to cut the country’s dependence on fossil fuels”, they added.

Meanwhile, Ken Steffes thinks “Nothing good for architecture can ever come from anyone doing business with Saudi Arabia.”

What do you make of Foster building an airport in Saudi Arabia? Join the discussion ›

Dezeen is the world’s most commented architecture and design magazine, receiving thousands of comments each month from readers. Keep up to date on the latest discussions on our comments page and subscribe to our weekly Debate newsletter, where we feature the best reader comments from stories in the last seven days.