US studio Deegan-Day Design & Architecture has designed a California weekend home to hold strong against wildfire and capitalise on views.

Located near the city of Malibu, the 4/Way House sits on a southeast-facing ridge in the Santa Monica Mountains, in a community called Topanga.

Joe Day – a founder of local studio Deegan-Day Design & Architecture – bought the property with his wife, Nina Hachigian, in the 1990s following a devastating wildfire in the area that destroyed 20,000 acres of land. The disaster led to a drop in property values, which made buying a 2.5-acre site there feasible for the young couple.

Construction didn’t begin until 2008, and work happened incrementally over the years. The project was finally completed last year.

The design not only makes the most of the rolling landscape and scenic views, it takes a defensive stance against the threat of wildfire.

“The retreat mediates between competing topography and sight lines, and between the allure and danger of life in Topanga,” said the studio.

In plan, the home consists of two offset bars that are nudged into the hillside and encircled by terraces.

“Surrounding terraces act as both fire buffer and a complement of outdoor rooms,” the team said.

The bars are covered with an irregularly shaped zinc roof that folds over the side walls and acts as a “fire blanket”.

Structurally, the house is supported by a complex web of steel trusses. The base is made of concrete.

The home’s low position on its street, makes it one of the first structures that will confront a wildfire racing up the ridge – a consideration that emerged early in the design process.

“We assessed first what would be left to rebuild if 4/Way did burn, and how the site might shield other homes and safely serve firefighters,” the team said.

Within the home, large stretches of glass offer views of the landscape, yet the two-storey house sits low enough to preserve views for upslope neighbours.

The upper level contains the primary bedroom suite and a study, while the lower floor holds a living room with a “conversation pit”, a kitchen and dining area, and a guest room. The house totals 2,250 square feet (209 square metres). 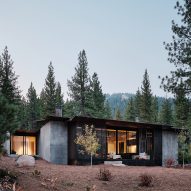 The team designed most of the interior fittings and decor, including an angular table in the conversation pit, a stair railing that doubles as shelving and built-in bedroom furnishings.

The project’s name, 4/Way House, was inspired by four “rotations” that were integrated into the design.

One entailed shifting the house to offer a view of Santa Monica Bay, and another involved configuring trusses to support the angular roof.

A third rotation concerns the layout of cabinetry and the transition between levels in the house.

The fourth refers to the home’s detached carport, which sits downhill from the main residence and has a roof that lifts upward, enabling it to double as a movie screen.

While currently used as a weekend retreat, there are plans to make 4/Way House a full-time residence.

The photography is by Taiyo Watanabe.

The post 4/Way House by Deegan-Day responds to “allure and danger” of LA site appeared first on Dezeen.