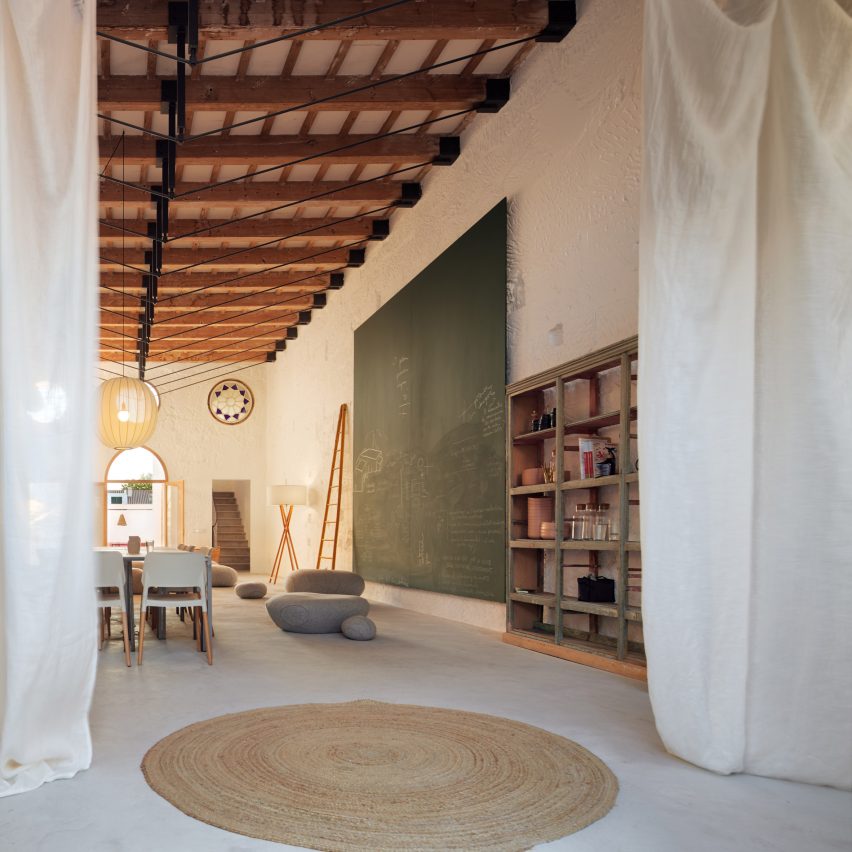 Hospitality company Artchimboldi and Spanish architect Emma Martí have teamed up to transform a forgotten girls’ school in Menorca into a bright and contemporary retreat for professionals.

The company already has two locations – a pair of modernist apartments in Barcelona – but has now opened a third, larger site in Menorca that can be used for corporate retreats.

“In designing Artchimboldi Menorca, I wanted to transfer everything I have been able to observe and witness from my experience of welcoming all kinds of companies to the spaces in Barcelona,” explained Truyol.

“Menorca retains its authenticity, has a very close and accessible nature, and brings a very different rhythm than the city.”

Artchimboldi Menora occupies an old girls’ school in Sant Lluís, a quaint village in the southeast of the island.

The school was constructed in 1900 but was eventually abandoned, leaving the interior in less-than-ideal condition. Truyol brought in Martí, a local architect, to carry out a revamp.

Although the building’s roof had to be completely rebuilt, insulated and waterproofed, Truyol and Marti took a light touch with the rest of the renovation works in order to highlight “the history, experiences and soul of the space”.

The building’s original marés stone walls were preserved and freshened up with a coat of white paint, and many of its timber ceiling beams were left in place.

An airy living and dining area occupies the first floor. At its heart is a custom-made table made of lacquered wood, which can be easily reconfigured into different formats for group meals, meetings or workshops.

Beyond the table is a cosy lounge that features amorphous grey seating poufs and a wood burner with a four-metre-high flue that accentuates the height of the room. 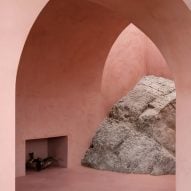 In a nod to the building’s past, Tyrol and Marti have also included a large antique bookcase and a schoolroom-style slate board, where guests can scribble down any thoughts and ideas.

At the rear of the room, timber-framed doors lead out onto a gravel patio with a micro cement pool.

Guests can catch some rest on the building’s first level, which much like the ground floor has white-painted stone walls. But here, polished concrete flooring is replaced with bold chequerboard tiles.

Pre-existing partition walls were knocked through to make way for a sequence of boxy Flanders-pine sleeping pods.

Each one is fronted by a linen curtain that, when drawn back, reveals a comfy woollen futon.

Slender black ladders grant access to the top of the pods, where guests can relax during the day. Alternatively, there is a small seating area dressed with a grey sofa and woven rugs.

Personal belongings can be stored underneath the pods or in the bespoke sage-coloured shelving unit that sits at the room’s periphery.

Additional sleeping pods can be found in the building’s loft.

Other retreats on Spain’s picturesque Balearic islands include The Olive Houses, a pair of off-grid dwellings in Mallorca where architects, writers and artists can work uninterrupted.

The two buildings are minimally finished and rendered with stucco that complements the surrounding olive trees.

The photography is by Pol Viladoms.

The post Artchimboldi Menorca is a work retreat inside an abandoned girls' school appeared first on Dezeen.