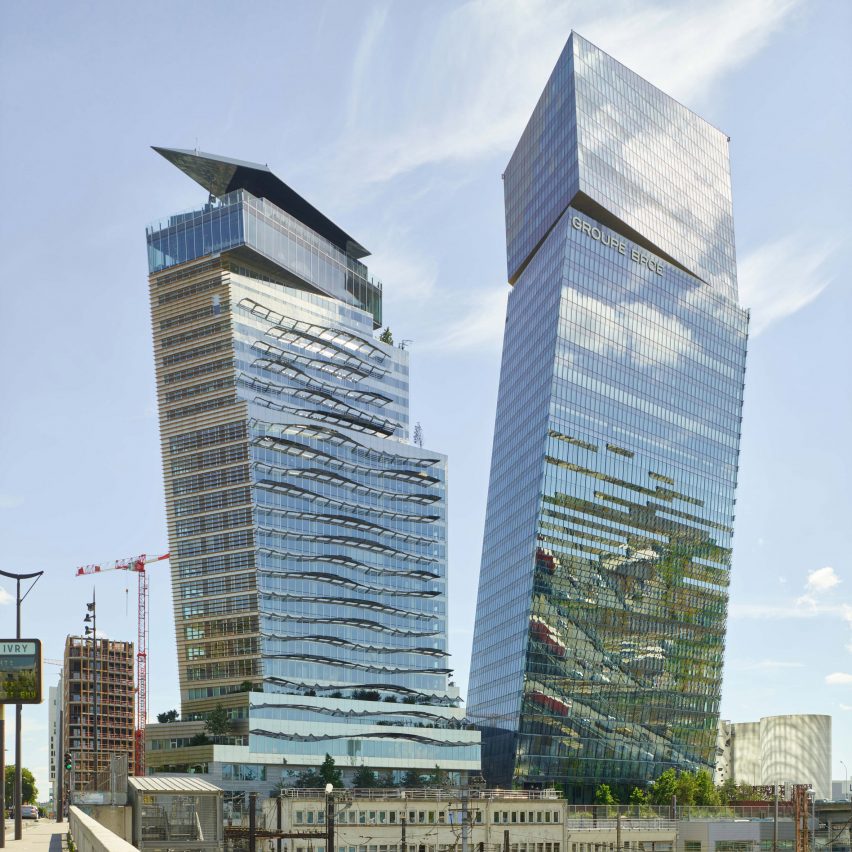 French studio Ateliers Jean Nouvel has designed the 180- and 125-metre-high Tours Duo skyscrapers to “create a character” for eastern Paris.

Designed as a landmark for eastern Paris, the pair of skyscrapers contain 97,000 square metres of office space and a 139-room hotel with interiors designed by French designer Philippe Starck.

“This project is about building its summit, its culminating point for the beginning of the century. It is also about creating a character, a singularity that is in relation with the reality of the site, that reveals its particular beauty, that relies on it to invent and strengthen the attractiveness of the place.”

Built alongside the Périphérique ring road and a large railway siding, the pair of skyscrapers both lean away from a central plaza.

Nouvel angled the skyscrapers so that they would be more visible from the River Seine, the Périphérique and several of the city’s landmarks.

“The site does not have landmark status in the perspective of the Avenue de France,” he said. “It is not visible from the sidewalk of the Bibliothèque Nationale de France.”

“A slight inclination could easily make the towers come into view while enabling us to play a game with the reflections of the railway landscape in the south facade, which would be very visible from the ring boulevard and the boulevard du Général Jean Simon,” he continued.

At 180 metres high, Tour Duo 1 is the second tallest skyscraper in Paris after the Tour Montparnasse. The 39-storey building contains offices on its upper levels with an auditorium and shops on its ground floor.

A meeting space was placed at the top of the tower. 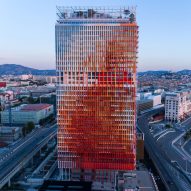 The 29-storey neighbouring tower contains office space along with a hotel on its upper floors. It is topped with a restaurant and bar that has a terrace with views across Paris.

The upper levels of both skyscrapers were turned, with an angled canopy placed on the shorter tower to give them an “expressive” form.

“The tall buildings of past decades are headless; their roof terraces are not accessible,” said Nouvel.

“A summit has a head, an identifiable profile. That is why the heads of our two actors are expressive, alive, why they speak to one another and also to their friendly neighbours.”

The Duo towers are part of a wave of skyscrapers being built in Paris, including Ateliers Jean Nouvel’s Hekla skyscraper in the La Defense area of the city. Herzog & de Meuron recently announced that construction was set to start on its Tour Triangle scheme, while the city’s tallest building – the Tour Montparnasse – is currently being renovated.

The photography is by Roland Halbe.