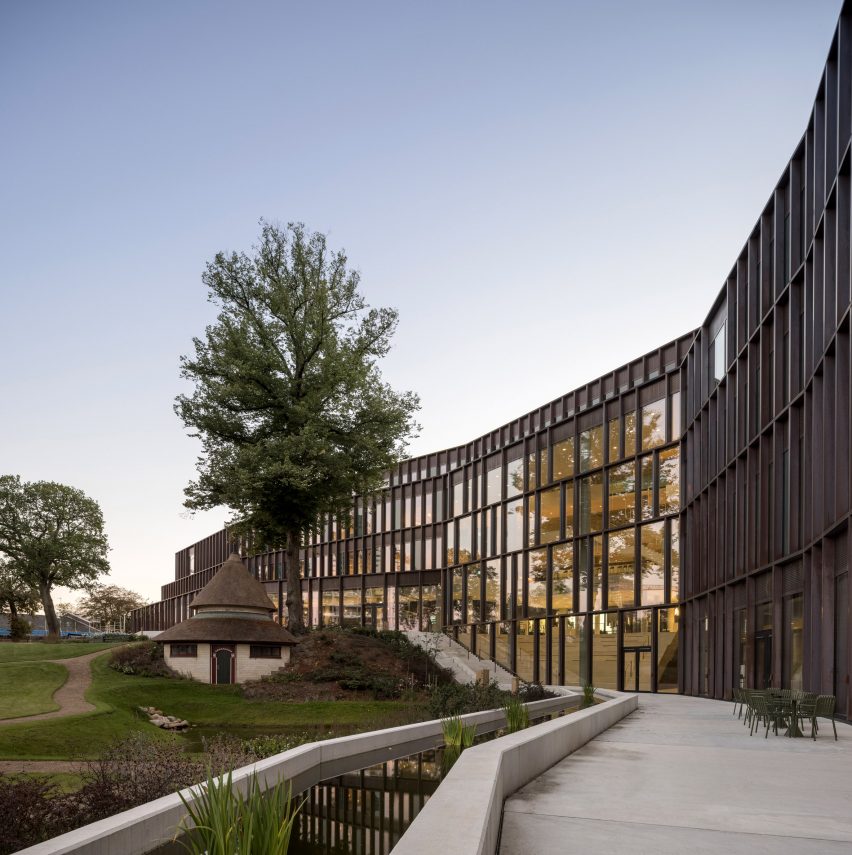 CF Møller Architects has created a headquarters for Carlsberg Group in Copenhagen with a recycled copper facade and a golden metal bridge to reference beer and brewing equipment.

The Carlsberg headquarters is located in Valby Bakke in central Copenhagen, a historic area where the brewery first began making beer in 1847.

“As a building sculpture, it needs to own the same self-confidence and love of iconic architectural attitude and aspiration of architectural quality as the existing listed buildings of the Carlsberg legacy in the area,” CF Møller Architects partner Lone Wiggers told Dezeen.

The headquarters is comprised of large angled and multi-faceted volumes to create a design that Wiggers described as a “deep three-dimensional ribbed net structure”.

Its form and facades were tailored to sensitively fit the headquarters’ historic surroundings.

The offices taper in height near built areas, while the footprint of the building is recessed around Carlsberg founder Carl Jacobsen’s villa and gardens, which are also on the grounds.

“The building is equal on all sides without any back or front side, but is in its angled and tilted facade relating to all contextual surroundings in relation to scale of neighbouring buildings and to views and connectivity under and along the building facades,” Wiggers explained.

“The design needs to balance the need for an iconic HQ-expression fitting for a world-class brand like Carlsberg with a delicate and topographically, demanding site.”

“We needed as few singular materials for the facades as possible that could unify the very expressive formal volumes of the building,” said Wiggers.

“We chose a deep three-dimensional ribbed net structure, clad in recycled copper that could work as part of the solar screening of an otherwise open transparent glass facade.”

The building was designed as a gate to the Carlsberg City District, and bridges over one of three new roads into the district to mark the entrance to the area.

The underside of the bridge is lined with gold perforated metal sheets that have been decorated with a carbonated bubble design to reference both beer and the freshwater site the grounds sit on.

A Nordic material palette was applied to the interior, with white concrete floors used for the central atrium and the communal spaces and extending out into the gardens.

“The interior spaces are trying to balance the complex culture of Carlsberg that plays out between a kind of down-to-earth folklorism and an elegant internationalism belonging to a successful international export brand,” Wiggers said.

A three-legged plan is organised around the large central atrium which connects all floors, with social and communal areas on each floor adjoining the space.

“Each floor of the building is centred with social spaces around the main atrium, which acts as the three-dimensional ‘heart space’ of the building, where all departments are being brought in touch with each other vertically and horizontally,” Wiggers said.

Large amphitheatre-style steps fitted with cushions look out to the gardens, inviting visitors and employees to socialise and use the space for informal working.

The building’s materials were chosen with durability and sustainability in mind. Surfaces have been mainly left untreated, raw and without chemical intervention, while wood cladding is micro-perforated to provide acoustic absorption.

Solar panels were placed on the roof, which also doubles as a green roof in areas. The facade is fitted with low-energy ventilation systems that filter and exchange air to optimise the indoor climate.

CF Møller Architects was founded in Denmark in 1924 by Christian Frederik Møller. Other projects designed by the studio include a campus with a lego brick facade and Sweden’s tallest timber building.

Photography is by Adam Mørk.