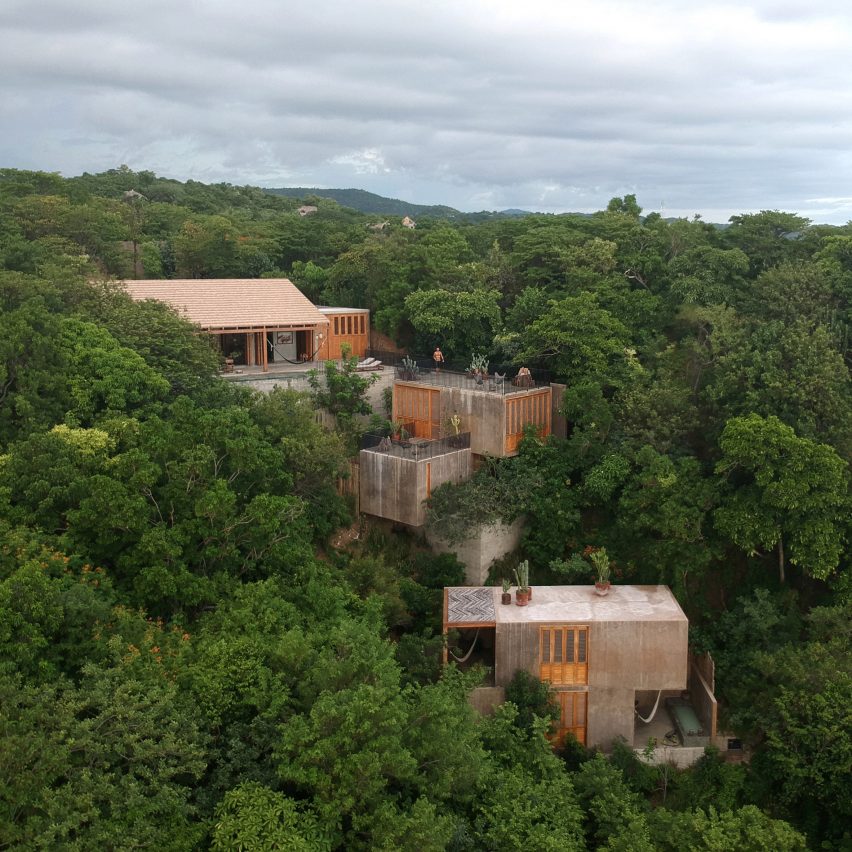 Em-Estudio has built a holiday home on a steep hillside in Oaxaca, Mexico, from coloured concrete chosen to blend into the rocky mountainside.

“The shape and orientation of the project is determined by the topography of the land, adapting to it and trying to make the house look like it has always been there,” said Em-Estudio architect Ivan Esqueda.

“All the materials used were thought of as elements that blend with the mountain, like stones that balance on a hillside,” he told Dezeen.

La Extraviada is made up of two concrete volumes that are independent of one another but joined by a pathway.

The main volume is accessed through an entrance at the top of the plot, next to a private car park.

A staircase, sheltered by exterior walls to trap cool air, leads to a stone vestibule-patio and the house’s front door.

On this level, there are dining and living areas, as well as a kitchen, pantry and laundry room featuring interior design by Esqueda’s wife, Gala Sánchez-Renero.

Covered by a wooden roof clad in clay tiles, the living space opens out onto a long, sea-facing swimming pool. An adjacent stone roof terrace with clusters of local potted plants looks towards the same view.

Enclosed in stacked cubed structures are two bedrooms and two bathrooms at lower levels, each with its own patio that are smaller versions of the terrace.

“All the rooms were designed considering the cross-flow of air for keeping the spaces fresh,” explained Esqueda.

“Each room has a ceiling fan and wooden windows that open fully, facing the main source of air coming from the sea and patios.”

A staircase leading to two rooms in the cubed structures is accessed from one side of the roof terrace.

On the opposite side of the terrace is the stone pathway which connects the main block to La Extraviada’s second volume that can be independently accessed.

This volume includes two separate studios housed on levels above and below each other, and an additional kitchen and bathroom.

A pair of small freshwater pools sit on two levels of the second volume. One is built into a terrace, and the other faces towards the mountainside.

The pathway connecting each volume continues down the hillside, spilling towards the beach.

La Extraviada is mainly made from regional materials such as guapinol wood and local stone obtained from nearby quarries.

Much of the interior carpentry uses macuil wood which is sourced from a tree that is native to Mexico.

Em-Estudio used regional materials as an aesthetic decision and an environmental one.

“We wanted to complete a project that respects its surroundings. We think the best way to do that is by using local materials that don’t need to be transported for long distances and are easier to maintain,” explained the architect.

La Extraviada owes its name to extraviado, a kind of Mexican grouper fish. Esqueda described the inception of the house as an exciting period spent dreaming about its completion.

“Although there was a long way to go, the name came from a certain sensation that we were fishing for a dream.”