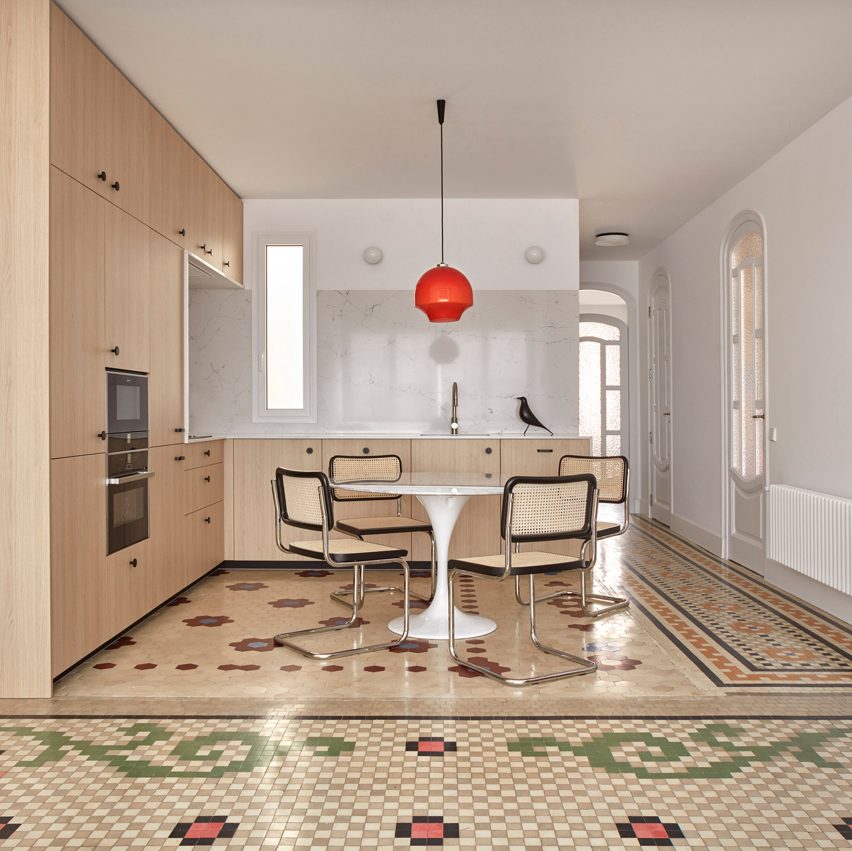 DG Arquitecto has completed a minimalist renovation of a 1920s penthouse in Valencia, which celebrates the apartment’s original mosaic floors, decorative mouldings and arched doorways.

Located on the top floor of an apartment block in the city’s Ruzafa neighbourhood, the 100-square-metre penthouse was previously made up of narrow corridors and small rooms.

Local studio DG Arquitecto, run by Isabel Roger Sánchez and Daniel González López, was asked by the clients to adapt the layout to suit modern living while also preserving its original character.

The studio made the decision to keep the decorative mouldings and doors while opening up the living area to create an open-plan space with an integrated kitchen.

“The state of the house before the renovation was quite good,” DG Arquitecto told Dezeen. “The previous owners kept the floors and doors in good condition.”

The original ceilings were uncovered and restored, the doors painted white to hide any damage and the floors cleaned to recover the original colours of the mosaic.

“This type of flooring is quite typical of Valencia,” said the studio.

“At the beginning of the 20th century, in a town near Valencia called Meliana, there was one of the most important factories in the world for this type of flooring.”

While the living room and kitchen were combined into one open-plan space, the apartment’s three bedrooms, two bathrooms and terrace follow the original layout.

New clean-lined interventions such as the kitchen are made from oak, which the architects said was chosen for its warmth and uniformity.

An oak floor and dressing room were added to the main bedroom, while an office area with built-in shelving sits between the bedrooms and the terrace.

“Small changes in the distribution, very limited by the initial idea of ​​completely maintaining the original floor of the house and the ceilings with mouldings, helped us to transform the existing spaces,” explained the studio.

Other Spanish apartment renovations that preserved the building’s original floors include this 1930s apartment in Barcelona, where colourful mosaics mark out the original layout, and another Barcelona apartment where the variety of tile patterns appear like colourful rugs.

Photography is by Mariela Apollonio.