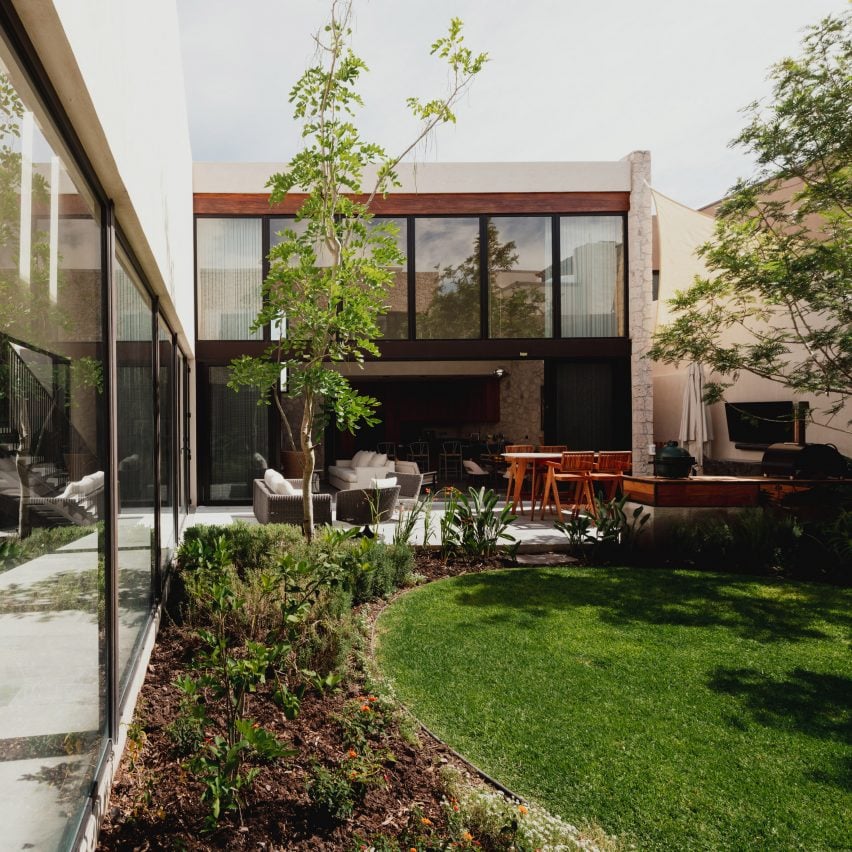 Evelop Arquitectura drew inspiration from the work of Mexican architect Luis Barragán for this wood-and-stone house in San Miguel de Allende, which is interspersed with lush garden courtyards.

According to local firm Evelop Arquitectura, Barragán admired its traditional buildings and sought to replicate some of its features in his own work.

The studio, which is led by architect Eduardo Arturo González Hernández, sought to create a “garden with a house” based on Barragán’s principles. The architect was known for combining the principles of modernism with traditional Mexican design and craft.

For this recent project completed in 2021, Evelop Arquitectura lent more importance to the surrounding greenery than to the interior, built spaces.

“A poetic environment is created between the elements, where the harmony of the natural construction elements is celebrated in direct relationship to the vegetation,” said the studio.

Large wooden doors front the outer wall of the residence, drawing visitors in from the street. At this entrance to the property, there is the first courtyard that has a water feature with a small “island” containing a picnic table.

The entrance to the interior of the home itself lies beyond this intermediate space. Evelop Arquitectura describes this interior beyond the courtyard as a “second facade”.

This first interior space holds the living and dining rooms. These spaces have clerestory windows and wooden ceilings with exposed beams.

The majority of the home is laid out on the ground level, facing the lush gardens that occupy the sides and centre of the home. “The distribution of the house is introverted, where the gardens create the rhythm of the routes to the different spaces of the house,” said the studio.

To emphasize the connection between the interior spaces and the gardens, Evelop Arquitectura included full-height glass walls in the living spaces. There are two bedrooms at the back of the 465 square-metres-property, each of which enjoys access to a small outdoor area.

Throughout the home, small details such as a shower with a glass wall that opens out to the exterior reinforce the connection to the surrounding gardens.

A long covered hallway bisects the gardens and connects the living spaces with the bedrooms at the rear of the home. In the hallway is a gently sloped staircase that leads to the partial upper level, which is for the children.

According to Evelop Arquitectura, the stair was designed to be used more easily by those with limited mobility.

The upper floor contains a playroom for the children, as well as their own bedroom and bathroom.

Eduardo Arturo González Hernández used local materials for the residence, which the architect says helps lend it a “timeless” quality.

This includes Santo Thomas marble, which covers the floors of the entire residence, pine doors, ceilings and furniture, and local stone on the exterior.

Other projects that have been completed in the area include a pink courtyard hotel by Ian Pablo Amores and a villa by Cherem Arquitectos that is made up of 12 smaller buildings clustered together.

The photography is by Andrés Mondragon Padilla.