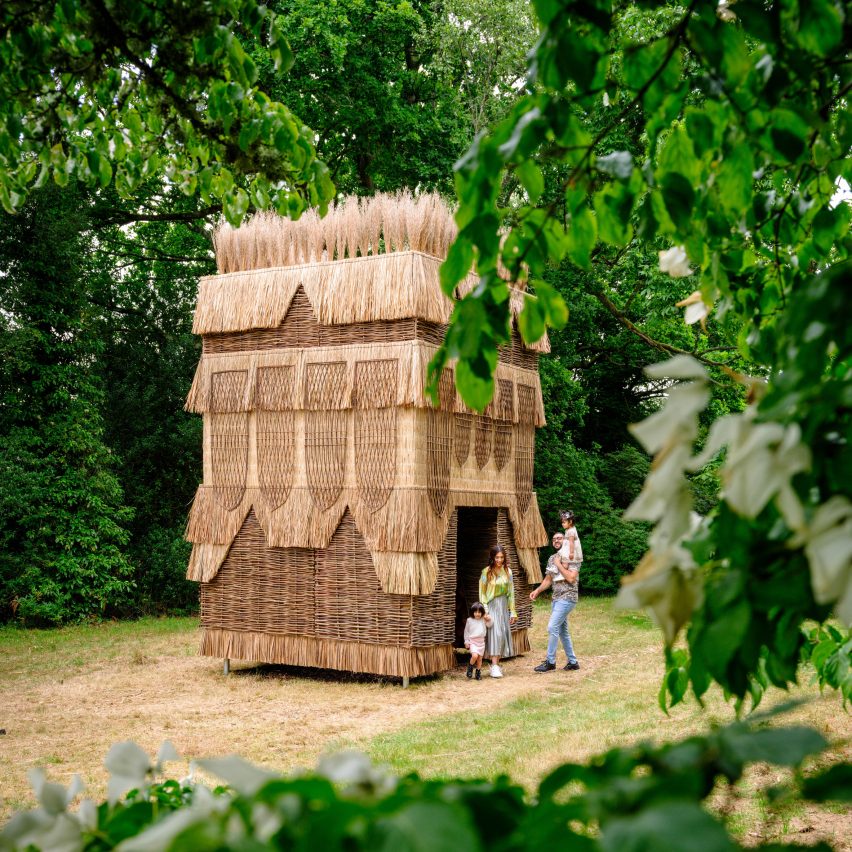 The False Banana Pavilion was designed by Flea Folly Architects to highlight the importance of enset, a flowering plant in the banana family that provides a food source for more than 20 million people in Ethiopia.

The pavilion is one of five temporary installations created for the summer programme at Wakehurst’s wild botanic gardens. The immersive artworks are each designed to promote public body Kew’s international science and research projects.

Flea Folly Architects worked with Kew research fellow James Borrell to develop a design that pays homage to enset, otherwise known as the false banana plant, which the organisation believes could be used as an important climate-resilient crop of the future.

False Banana Pavilion occupies a clearing surrounded by birch trees in Bethlehem Wood. The studio described its appearance as “something that is both familiar and alien in the landscape”.

Its design is influenced by the tukul huts traditionally found in Ethiopia, where the Dorze people typically use enset leaves to line the interiors of their woven-bamboo buildings.

Flea Folly Architects explained that it did not want to create a pastiche of these African dwellings and instead used locally sourced natural materials to create “a vernacular piece of architecture”.

The rectangular timber-framed structure is wrapped in panels made from woven hazel branches and compressed water-reed sheets. 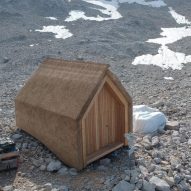 Horizontal bands of thatch are laid on top of the hazel and reed panels to form geometric patterns, adding a decorative flourish.

“These materials aim to give the architecture a personality amongst the landscape, almost like it will lift itself up and walk around the land once the public have left for the day,” Flea Folly Architects said.

An opening in the main elevation leads into a pyramidal space clad with over 900 birch-plywood leaves that are subtly stained in a gradient. Shifting from green to red, this gradient highlights the colour spectrum of the enset plant.

Each leaf is engraved with a different variety of enset species along with its corresponding location in Ethiopia, highlighting the plant’s ability to adapt and thrive in different geographical conditions.

A small seat built into the inner surface provides a place for rest and contemplation, where visitors can look up at the changing sky through an open oculus at the pyramid’s peak.

False Banana Pavilion was built by Flea Folly Architects founders Pascal Bronner and Thomas Hillier over the course of 12 days. It will be open to the public until the end of September 2022.

The structure is raised off the ground on temporary screw piles that will allow it to be removed without causing any damage to the site at the end of the summer programme at Kew Wakehurst.

Flea Folly Architects works across architecture, design, fashion, art and installation, using craft to bring speculative worlds to a wider audience. Previous projects by the studio include an installation made from stacked wood that nodded to its setting in a monastic archway in London’s Clerkenwell district.

The photography is by Jim Holden.