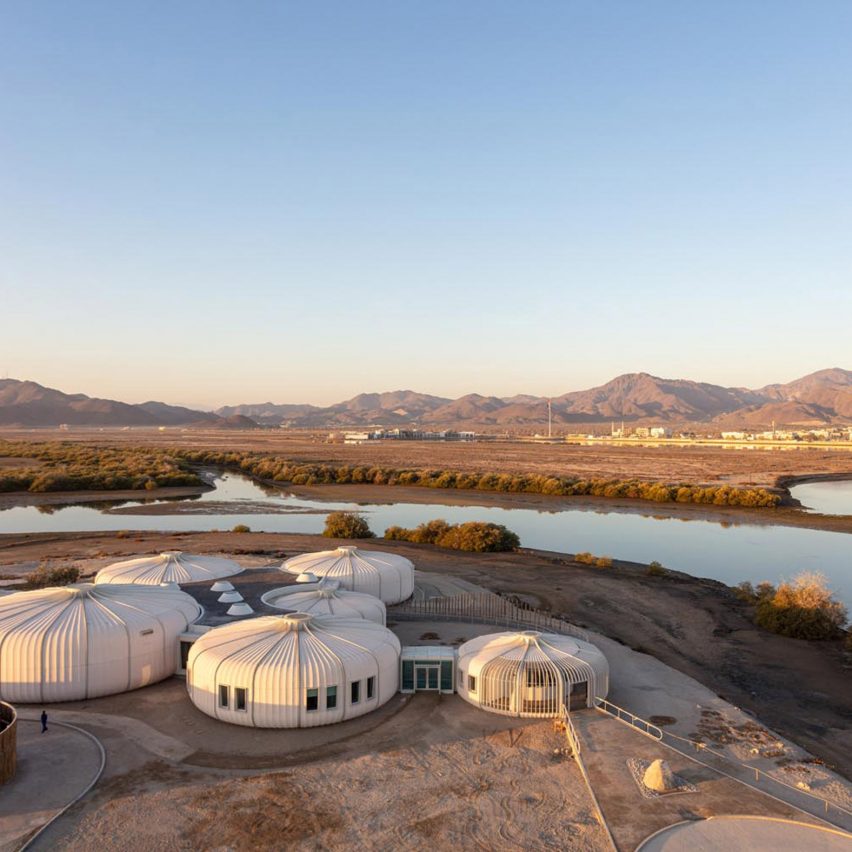 British studio Hopkins Architects has created a cluster of prefabricated concrete pods to house the Khor Kalba Turtle Wildlife Sanctuary on the eastern coast of the emirate of Sharjah in the UAE.

Built for Sharjah’s Environmental Protected Areas Authority, the turtle sanctuary and visitor centre stands on the edge of the Kalba nature reserve.

Hopkins Architects aimed to design a series of interconnected structures that were sensitive to the site, which is located by the Indian Ocean alongside a lagoon and dense mangroves.

“In many ways the site and the design are inseparable – the project itself is dedicated to the preservation of the site and its wildlife,” said Simon Fraser, principal at Hopkins Architects.

“Our client was very keen that the project would both celebrate nature and teach visitors about environmental responsibility,” he told Dezeen.

“The challenge was really how to preserve the site’s character and create buildings that sit in harmony with the setting.”

Created as a base for research and monitoring of the reserve and to provide information to visitors, the structure occupies seven interconnected circular pods.

Informed by fisherman’s baskets, the low structures were designed to be unobtrusive within the protected setting.

“Our core concept was to create a series of soft, rounded forms that touch the ground lightly, complementing the setting and having minimum impact on the skyline,” explained Fraser.

“We initially explored more rectangular forms and larger volumes but felt they were too dominant. A series of smaller fragmented forms seemed more appropriate, a bit like the kinds of fishing baskets often left around these coastal areas.”

Visitors to the sanctuary arrive at the smallest of the circular pods before walking along a path to the main structure, which consists of five pods of varying sizes surrounding a covered atrium.

Two of the pods contain exhibition space – one dedicated to the marine life in the park and one to the wildlife.

Offices and toilets are in two further pods, while the final connected pod contains a gift shop and cafe with views across the park.

From the visitor centre, a path passes an indoor classroom in a small pod, the wildlife care facility and a circular turtle pond, before leading into the sanctuary and across a footbridge to the mangroves.

The turtle sanctuary was designed as the sister building to the Buhais Geology Park Interpretive Centre, which Hopkins Architects designed for a desert site within Sharjah.

While the previous building was clad in metal, the studio chose to enclose the coastal building in white concrete.

Designed to reference the shells found on the local shoreline, the pods were constructed from prefabricated concrete segments that were made from aggregates sourced nearby.

“At Jebel Buhais we used a metal cladding, but for the Turtle Sanctuary we needed something a lot more durable to withstand the aggressive coastal environment, so we developed a different skin using a scalloped precast cladding with a white aggregate blended with discarded shells from the site,” said Fraser.

“The result was a softer shape with a finish that is more sensitive to its context and blends in better.”

Both projects were made from prefabricated modules designed to sit lightly on the surface of their sensitive sites and both were informed by shells that were found nearby.

“What the two projects have in common are sites of exceptional beauty,” said Fraser. “There were also logistical challenges of building at these remote locations, as well as the need not to disrupt the ground and build as lightly as possible.”

“Both had challenging budgets which created the need for a modular system that could be standardised, prefabricated off-site and fitted together as a kit of parts,” he continued.

“Even though the sister project Jebel Buhais was located in the desert, we found similar sea shell fossils scattered across both sites – 65 million years ago that desert site was actually at the bottom of the sea bed.”

The studio was responsible for several highlights of the style, including their own home and the Portcullis House office block alongside Parliament in London.

Photography is by Mark Goodwin.