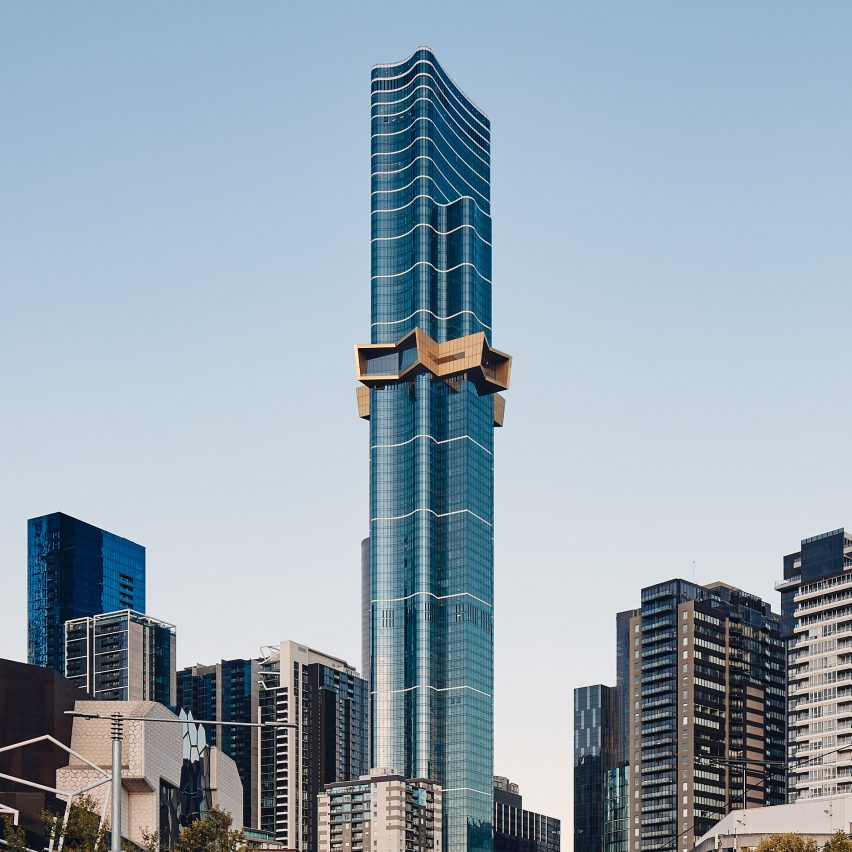 Architecture studio Fender Katsalidis has completed the Australia 108 skyscraper in Melbourne, which at 319 metres tall is the tallest residential building in the southern hemisphere.

The 100-storey skyscraper was designed to become a landmark on the city’s skyline with a golden star dubbed the Starburst breaking its clean lines.

“The completion of Australia 108 marks an incredible milestone for us which extends far beyond that of the building height,” said Fender Katsalidis director Nicky Drobis.

“The design tries to redefine some of the stereotypes around how skyscrapers are expressed – from the innovative, cantilevered Starburst to the varying ways the building can be perceived.”

“There are many aspects that make up this truly multi-faceted landmark and our aim is for its architecture to be appreciated in different ways by residents, Melburnians and future visitors to the city.”

Standing near the studio’s 297-metre-tall Eureka Tower, the skyscraper has a rectangular ribbed shape and has a fully glazed exterior to give views across the city.

Horizontal white bands wrap around the building and a large cantilevered golden star protrudes six metres outwards from the skyscraper around two-thirds of the way up.

According to the firm, the design of the golden star was informed by the Commonwealth Star on the Australian flag and is said to form an exclamation point on the skyline.

“It’s unusual for an architecture firm to design two of the city’s tallest buildings and we are proud to have done this in Melbourne,” said Fender Katsalidis director Craig Baudin.

“We have used this as an opportunity to allow the towers to have a dialogue with each other, being partners in the skyline, while each expressing their own identities,” he said.

“The dramatic cantilevered forms of the Starburst allow us to achieve a generosity of communal spaces to these levels, despite being constrained by a relatively small site.”

At ground level, a heritage facade was incorporated into the base of the skyscraper and is framed by a collection of stacked green canopies that enclose a ten-storey car park.

Australia 108 has become the tallest residential building in the southern hemisphere. Although the Q1 Tower in Surfers Paradise has an overall height of 322.5 metres it is topped by a spire and its roof height is only 245 metres above the ground.

Elsewhere across the world, Sou Fujimoto Architects are collaborating with Mitsubishi Jisho Sekkei to build Japan’s tallest skyscraper, while Dock Mill by Urban Agency is set to become one of Europe’s tallest timber buildings.