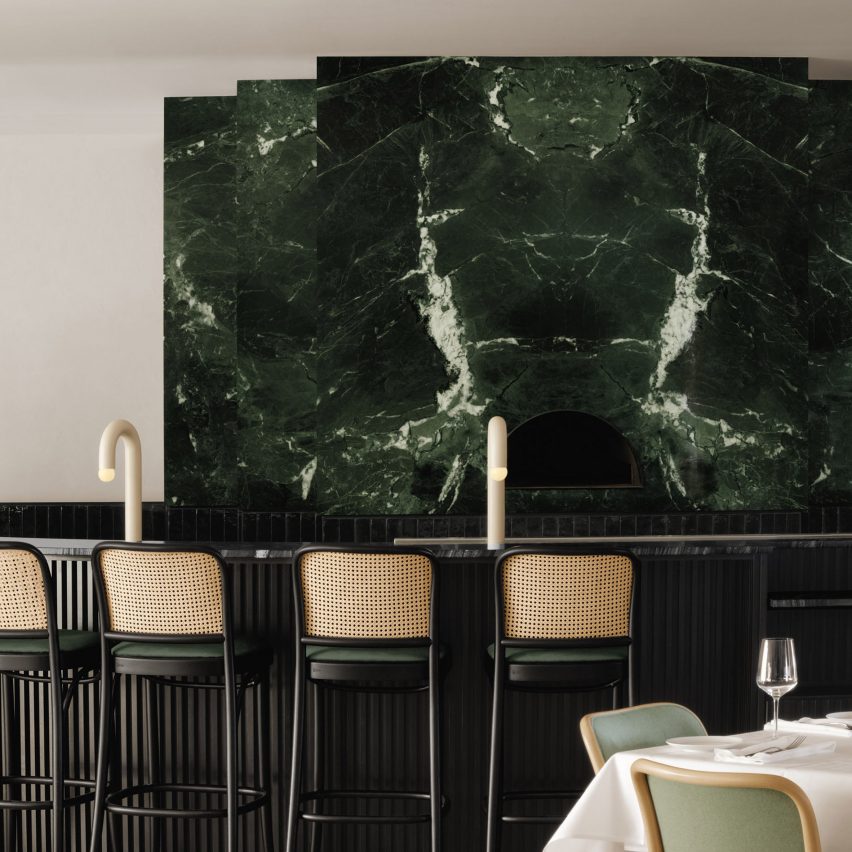 Dark green marble, glossy black tiles and sculptural lighting contrast the rough stone walls of this Montreal restaurant that has been resurrected by local Ivy Studio.

Located in Rosemère, on Montreal’s north bank, Piatti opened 15 years ago in an old stone building that was previously extended to accommodate a larger commercial space.

After a fire ripped through the Italian restaurant over a year ago, damaging the roof and the interior, the owners chose to renovate and update the space.

“From this tragedy rose the opportunity to give the space a much-needed facelift,” said the Ivy Studio team, who took on the project.

“While the overall aesthetic is very contemporary, the decor was inspired by traditional Italian design and includes textures, materials and colours that project clients directly to the Mediterranean,” the studio added.

The two-storey building is entered on the lower level, where the preparation kitchen, a private event room and the washrooms are situated.

Upstairs are the dining areas, each with a distinct atmosphere. When entering past courses of glossy black tiles, customers are met by a “monumental” pizza oven wrapped in green Saint-Denis marble.

A black stained-wood and marble structure in front acts as a dining and service area, across from a hand-plastered pistachio wall with an arch that leads to the closed kitchen.

Above a sienna-toned velvet banquette, a mirrored wall helps to make the dining space feel larger – reflecting its cream walls and sheer curtains.

Bistro chairs with green seats and caned backs are placed around tables.

A circular wood-topped table sits on zig-zag black and white tiles below a central bespoke chandelier.

The bar occupies the old stone aspect of the building. Here, a U-shaped counter is clad with vertical oak boards and topped with a four-inch-thick travertine slab. 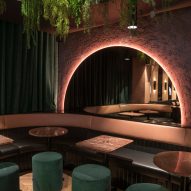 Jack Rose is a grungy "tropical themed" restaurant in Montreal

Custom stools made from velvet, steel and wood are lined up against the bar, colour-matching the banquette upholstery in the dining room.

Minimal, custom cream-painted lamps are spaced along the length of the counter, while a steel structure suspended above holds bottles behind fritted glass panels.

“The entire room has recessed lighting going around the ceiling to properly highlight the original stone walls in the evening,” said Ivy Studio.

Montreal is home to a wealth of Italian restaurants with notable interiors, several of which have opened over the last few years.

They include pizza spot Vesta and Tiramisu at the city’s Hilton hotel – both designed by Ménard Dworkind.

Among Ivy Studio’s other hospitality projects in the Quebec capital is Jack Rose, an eatery in a former auto body shop.

The photography is by Alex Lesage.