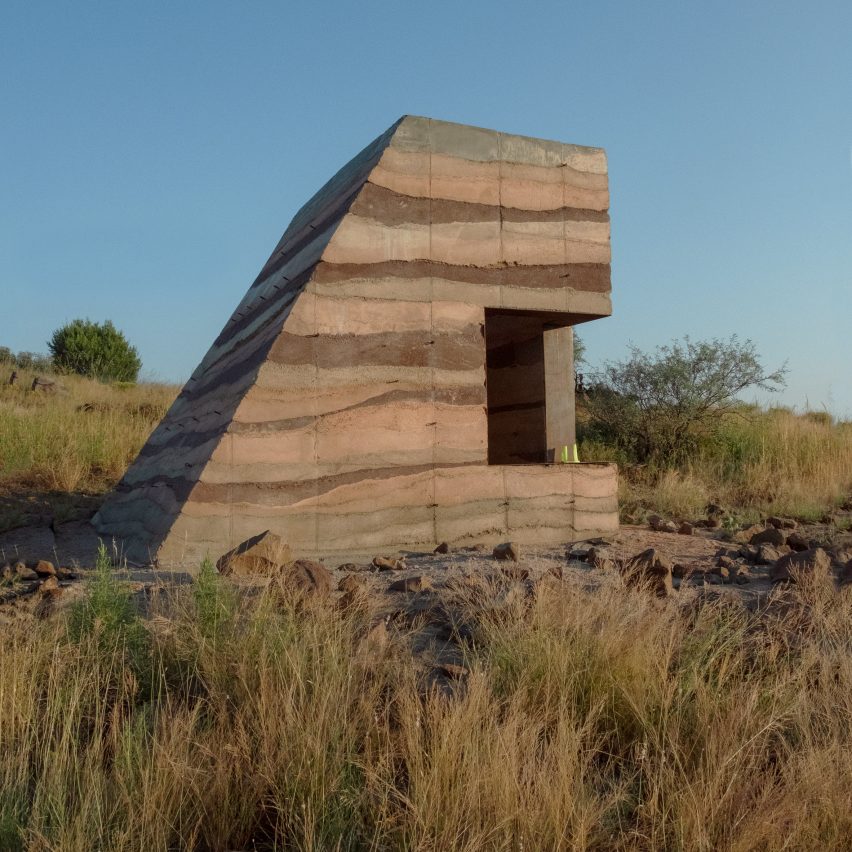 Designer Jessica Martin has designed a rammed-earth structure in the Arizona desert that is meant as a refuge for humans as well as for plants and animal life.

For her thesis project at the School of Architecture (TSOA) in the US, Martin created a rammed-earth shelter called Cinders in the Chapparal region of Arizona using three varieties of the local soil.

“Cinders is a homage to the immersive nature of living openly among the landscape, inviting human participants as temporary shepherds of the land – honoring and inviting interspecies cohabitation,” Martin told Dezeen.

Constructed in a remote part of the desert, the shelter is not accessible by road. It is roughly pyramidal in form with an open top and a window cut into one of the sides.

At only 156 square feet (48 square metres), the structure is big enough to hold a small cot and table with some extra room to move around, as well as a small fire pit to heat the structure.

The building has been shortlisted for the small building category in this year’s Dezeen Awards.

Cinder has an open roof that lets in light and air, while the sloped sides of the structure provide protection from the elements.

“The building was developed through a series of researches and explorations into desert ecology and species inhabitation,” said Martin.

To create the structure, Martin mixed a combination of the Yavapai coral, Volcanic cinders and Madison gold soil varieties with cement and water to create a stratified effect.

This gave the building “a color palette that both elicits and transforms the surrounding geologies,” said Martin.

“Its materials acknowledge both the autochthonous ties to the region and the artificiality of construction,” she added. “The transience of the building itself is a conceptual focal point of the work.”

Rebar and a concrete bond beam were used to hold the stacked layers of earth in place and provide a degree of stability in the desert climate. However, the structure is meant to emulate the shifting landscape.

“Its entropic principle is of equal importance to its sturdiness – it is both a refuge and a document of decay,” Martin said. “And yet its foundations are solid, suggesting a simple, eternal form of rest and refuge.” “The austere and bold geometry of the work’s form, however, underpins both its integrity and its gestures toward endurance,” she added.

The top layers of the structure have been seeded with a mix of local seeds. Seeds will either germinate or be picked away as food, with both potentialities providing a “re-seeding source for future vegetation around the site”.

TSOA was founded by American architect Frank Lloyd Wright. Each year, students in the architecture program create a shelter for their final thesis projects.

“The experience of living in the student-built shelters at Taliesen West was very memorable and formative to the process behind Cinders,” Martin said.

Martin said the experience revealed the nature of “architecture as an extension of the skin” and as “extrusions of the earth, shedding, disgorging, metamorphosing.”

Other projects shortlisted in the small building category of Dezeen Awards 2022 include a shelter designed around a Chestnut tree by João Mendes Ribeiro and a construction school with a reversible-wooden design in the UK by EBBA Architects.

The photography is by Matt Winquist and Quinton Dominguez.

The post Jessica Martin designs Cinders desert shelter as "refuge and a document of decay" appeared first on Dezeen.