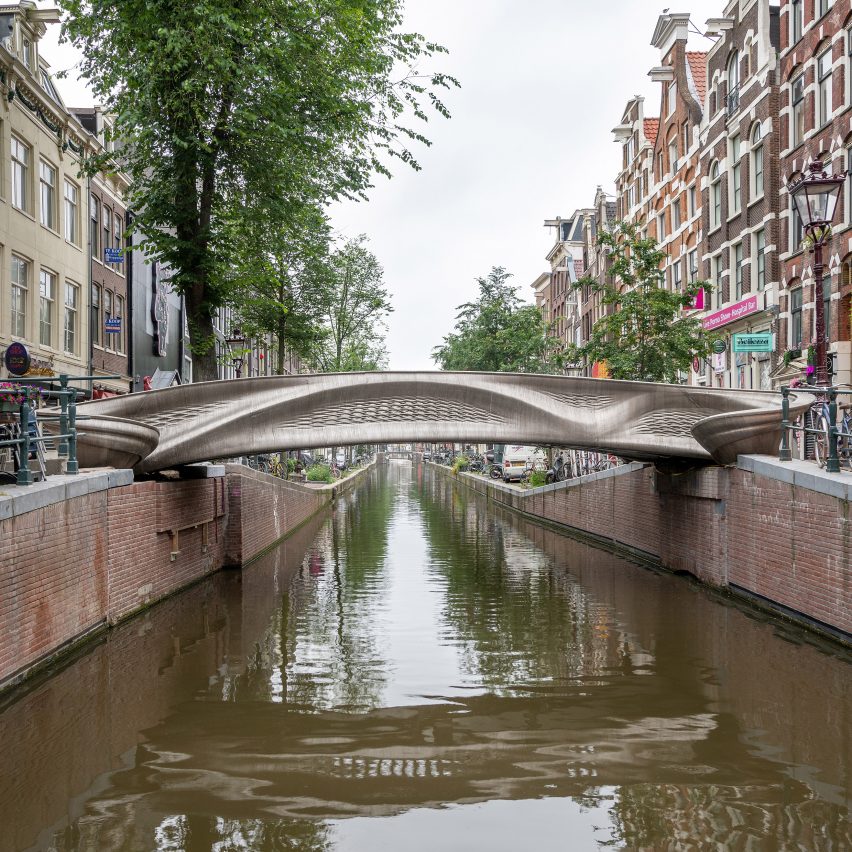 A 12-metre 3D-printed pedestrian bridge designed by Joris Laarman and built by Dutch robotics company MX3D has opened in Amsterdam six years after the project was launched.

The bridge, which was fabricated from stainless steel by welding robots, spans the Oudezijds Achterburgwal in Amsterdam’s Red Light District.

Named MX3D Bridge, it was designed by Joris Laarman Lab in collaboration with MX3D and engineering firm Arup.

The structure used 4,500 kilograms of stainless steel, which was 3D-printed by four welding robots in a factory over a period of six months before been installed over the canal this year.

The team behind the bridge claimed the technique showed how 3D-printing technology can lead to more efficient structures that use less material.

“This causes significant weight reduction and reduced impact for parts manufactured in the tooling, oil and gas and construction industries.”

The technique can lead to more sustainable structures, the team claimed. “The industry is facing a huge challenge in becoming carbon-neutral in 2050,” said Arup structural engineer Stijn Joosten.

However, architect Philip Oldfield calculated that the stainless steel used in the structure has 27.7 tonnes of embodied carbon.

“By stepping up our game and the will to make a change as designers and engineers, we can bring the necessary innovation to make a difference in tomorrow’s built environment.”

“Stainless steel has an embodied carbon of 6.15kgCO2/kg,” tweeted Oldfield, who is head of the art, design and architecture school at the University of New South Wales in Australia. “This bridge then has an #embodiedcarbon of at least 27.7 tonnes of CO2 to span a few metres.”

The Alan Turing Institute and Arup fitted the structure with a network of sensors that allows the bridge to collect data and build a digital twin to keep track of its performance and health.

The digital twin will monitor corrosion, load changes, environmental conditions and pedestrian use in efforts to further data-centric design.

The bridge has undergone multiple iterations since the project was launched in 2015, with the opening originally slated for 2017.

The original plan was to print the structure across the canal in situ, with robots working from both banks welding the bridge beneath them until they met in the middle.

The final iteration saw the bridge built in two parts at an off-site facility. Its main span was completed in April 2018 with the deck printed in October that year.

The structure was strengthened to be more in line with council regulations and to protect the structure against any potential boat collisions.

Although this is believed to be the first 3D-printed stainless steel bridge, bridges have previously been 3D printed from other materials. In 2017, construction company BAM Infra built what they claimed was the world’s first 3D-printed concrete bridge.

Photography is by Thea van den Heuvel unless stated otherwise.