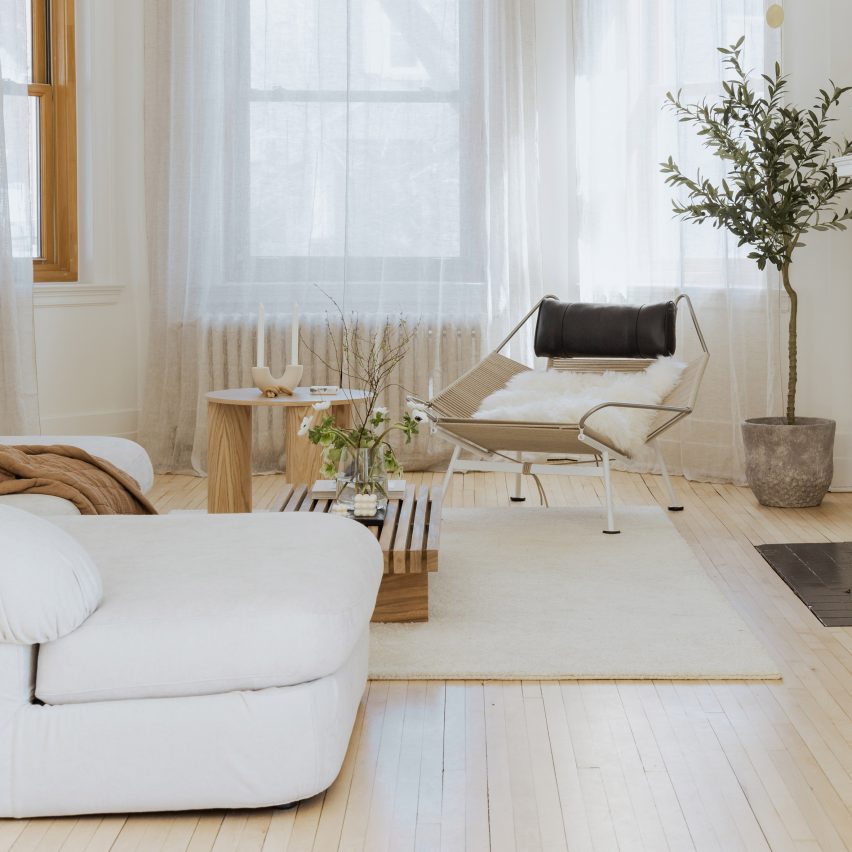 Talo Studios has renovated a house in Montreal that’s almost 100 years old, drawing on Scandinavian and Japanese influences for the interiors.

Located on Grey Avenue, in a residential area on the southern side of Mount Royal, the project embodies Japandi – the trend for interiors that are a hybrid of Japanese and Scandinavian style.

This renovation was for a sibling of Talo Studios founder Tiina Vahtola, who drew from their shared upbringing in northern Ontario and the family’s Finnish heritage.

“The key attribute to this design was to give the family a spacious living area while creating pockets within the space that bring the family together,” said Talo Studios.

“Walls were opened up to accentuate the homes originally high ceilings and pull in as much natural light into the space as possible, without disturbing the original structure,” added the studio.

The open-plan layout is split into different zones. Throughout the home, historical details such as a wood-burning fireplace have been preserved and updated with a light touch. Other areas, such as the kitchen, were renovated completely.

Towards the front of the home, the living room and a formal dining area have been combined into a single space.

Talo Studios organised seating around the existing fireplace and made new furniture selections to reinforce the home’s minimalist aesthetic.

“A thick rounded sofa is combined with a low linear slatted coffee table and nubby rug with a subtle swirl, reminiscent of a Japanese garden,” Vahtola explained.

“Light wood is mixed with the woolly texture on the seat of the iconic Flag Halyard Chair, a Nordic nod to part of the family heritage,” they added.

At the back of the home, the eat-in kitchen is described as “culinary-focused”. According to the designer, this is the family’s main gathering point on a daily basis.

By providing plenty of storage in the home’s dead spaces the kitchen avoids needing upper cabinets, which makes it feel brighter and more open.

The floor finish here is a light-hued tile, which contrasts the original hardwood floors found elsewhere in the home. In the corner opposite the main food prep area is a breakfast nook made of light wooden slats.

Throughout the home, the owner’s personal collection of art objects, sculptures, and paintings brings contrast to the otherwise neutral palette.

“The design aesthetic is inspired by subtle cues from Japanese and Scandinavian design, both of which draw their own momentum from nature, while still preserving the 100-year-old architecture,” said Talo Studios.

“Scandinavian design is really about simplicity without forgetting about comfort and functionality,” Vahtola told Dezeen.

“A neutral palette and the use of wood also add to this,” she explained, adding that her own Scandinavian heritage informed many of the decisions for the interiors.

While the renovation focused on the ground floor spaces, the designer also intervened on the upper level, removing old carpet to expose and refinish the original floorboards, and updating the primary bedroom’s en-suite bathroom.

Talo Studios was founded by Tiina Vahlota in 2020 and is based in Montreal.

Other projects in the Canadian city include a home in which the architects cut out sections of the floor to help bring light to lower levels and an airy loft in an industrial building for a young family.

The photography and styling is by Brooke Stephenson.