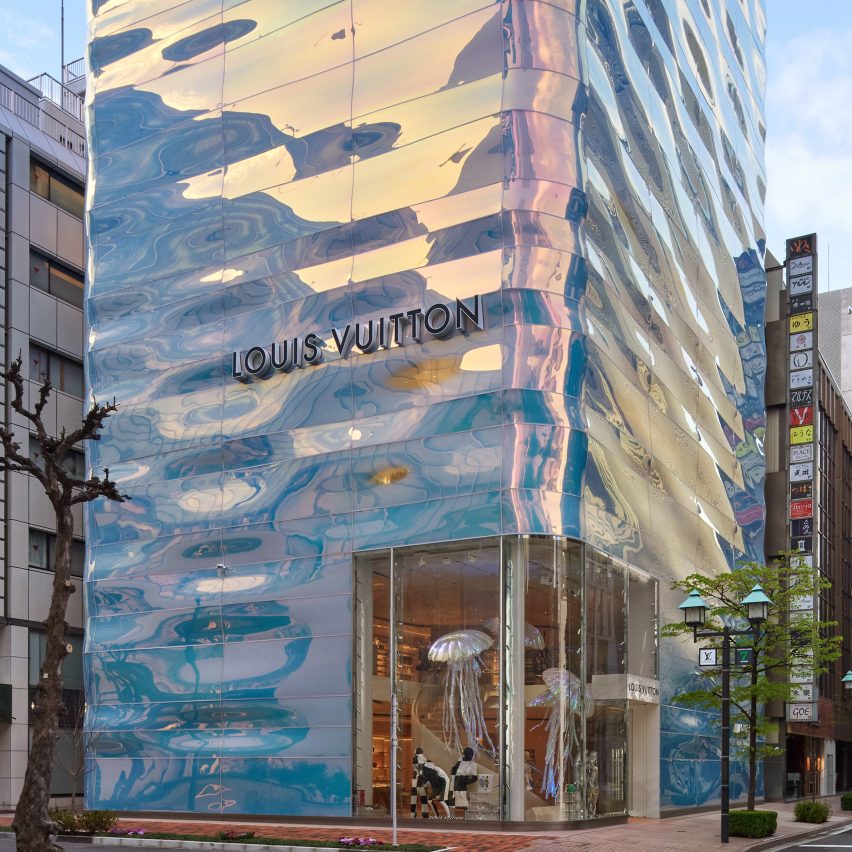 Replacing the brand’s previous store, which has occupied the same corner since 1981, the seven-storey Louis Vuitton Ginza Namiki store is wrapped in a water-like facade.

Designed by Jun Aoki and Associates, this undulating pearlescent facade was created to give the building a modern look and reflect Ginza’s location near Tokyo Bay.

“Poetic yet playful; shimmering and rhythmic. Once a peninsula extending in Tokyo Bay, this evocation of water is expressed throughout as smooth, undulating surfaces – from the glass facade that transmits shifting colour to the feature staircase and fixtures.”

The facade was constructed from two layers of glass that curve and ripple like water, which was covered with a dichroic film to create a pearlescent colouring.

A clear opening at the corner of the ground floor showcases the latest collections and allows glimpses of the art-filled, natured inspired interiors by New York-based studio Peter Marino.

“Jun Aoki’s facade is at once monolithic and imbued with fluidity – his representation of a ‘pillar of water’,” said Louis Vuitton.

“At street level, the building reflects the dynamism of Ginza; higher up, neighbouring towers become wavy apparitions, while a skyscape sweeps across the glass, marking the passage of each day.”

The lower four floors of the store are dedicated to retail. Pale stone covers the floor of the ground level with curved panelling on ceilings to add a three-dimensional effect.

Throughout the retail spaces textured walls, curved surfaces and a wood and glass material palette fill the space adding a lightness to the interior while reinforcing the natural theme.

The retail floors are connected by a central staircase constructed from sculptural oak and glass that winds through the store surrounding by suspended jellyfish with monogram detailing.

A secondary staircase at the rear of the store employs a similar material palette and is framed by a four-storey feature wall that reinterprets a painting by Japanese artist Kimiko Fujimura and reflects the buildings organic aesthetic.

Furniture by Pierre Paulin was added to inject acidic hues to the tonal interior, bright pinks and oranges can be found throughout the women’s floors while reds, blues, and muted yellows fill the men’s.

The store also includes a permanent space to showcase new arrivals as well as a VIP area on the sixth floor and the Le Café V on the building’s top floor.

Jun Aoki & Associates has completed several other projects for the fashion house, including this a flagship store in Osaka wrapped in curved glass sails and the nearby Ginza store that has a perforated facade based on the Vuitton monogram.

Marino has similarly renovated the brand’s New Bond Street store in London that uses artworks by Tracy Emin and the Campana Brothers.

Photography is by Daici Ano.