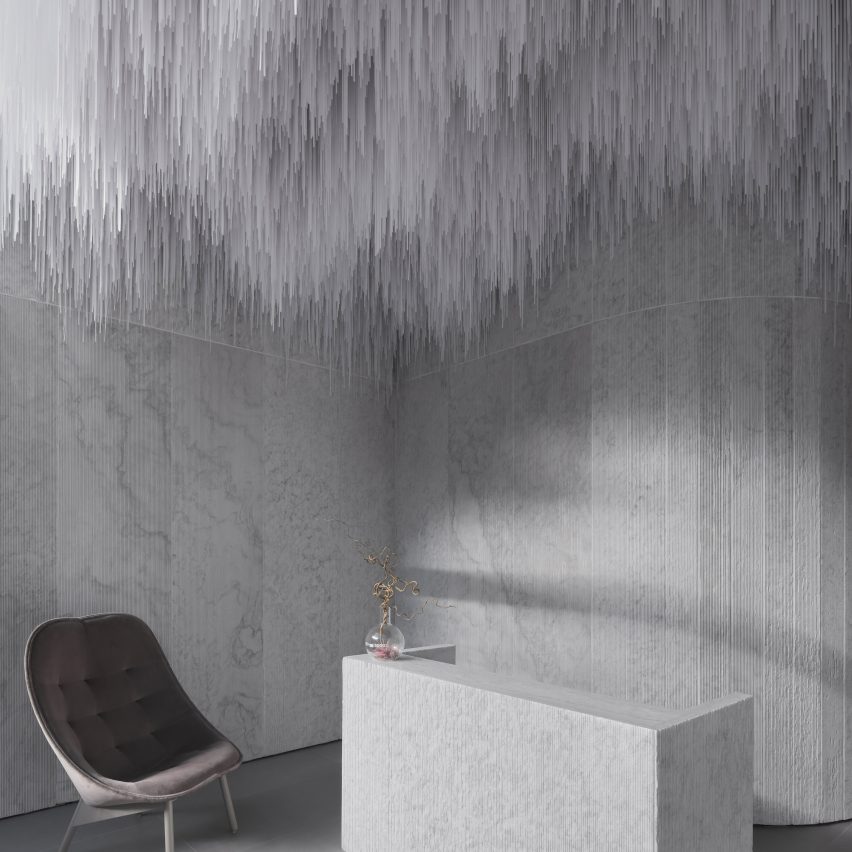 Set on the ground level of Vancouver’s Waterfall Building, AER Skinlab offers a selection of cosmetic injections and laser treatments.

Leckie Studio wanted to create a calm, grounding interior for the clinic to make it look as if it was “excavated from the stillness of rock”.

The studio’s key reference point for this aesthetic was a series of photographs by Canadian artist Edward Burtynsky, which captures the dramatic topography of quarries around the world.

In homage, the clinic’s service desk and almost all of its walls were clad with vast panels of grey marble sourced from nearby Vancouver Island. Each slab was given a subtle striated finish to emulate the irregular surface texture of stone.

Similar striations were made on AER Skinlab’s glass facade, obscuring the interior from passersby to preserve patients’ privacy.

Crowning the clinic’s reception area is a striking ceiling installation that was produced by Leckie Studio in collaboration with local art and design practice Tangible Interaction.

It consists of strips of Tyvek, a type of high-density polyethylene (HDPE) fabric, which are hung at different lengths. Clustered together, these resemble pointed mineral formations called stalactites that are created when water drips through a cave ceiling.

“The ceiling installation was very ambitious from both a design detailing and installation perspective,” Leckie Studio told Dezeen.

One of the walls in the clinic’s reception is punctuated with a narrow niche, where AER Skinlab displays its line of skincare products.

An arched corridor leads through to a consultation area and a trio of treatment rooms that were finished with pale plaster walls and grey soft furnishings to complement the rest of the interior scheme.

Leckie Studio has completed a number of projects around its hometown of Vancouver. Among them is Courtyard House, a family home that contains only the most essential living spaces.

The studio also designed the Vancouver office of Slack Technologies – the company behind workplace messaging system Slack – which occupies a former warehouse.

The photography is by Ema Peter.