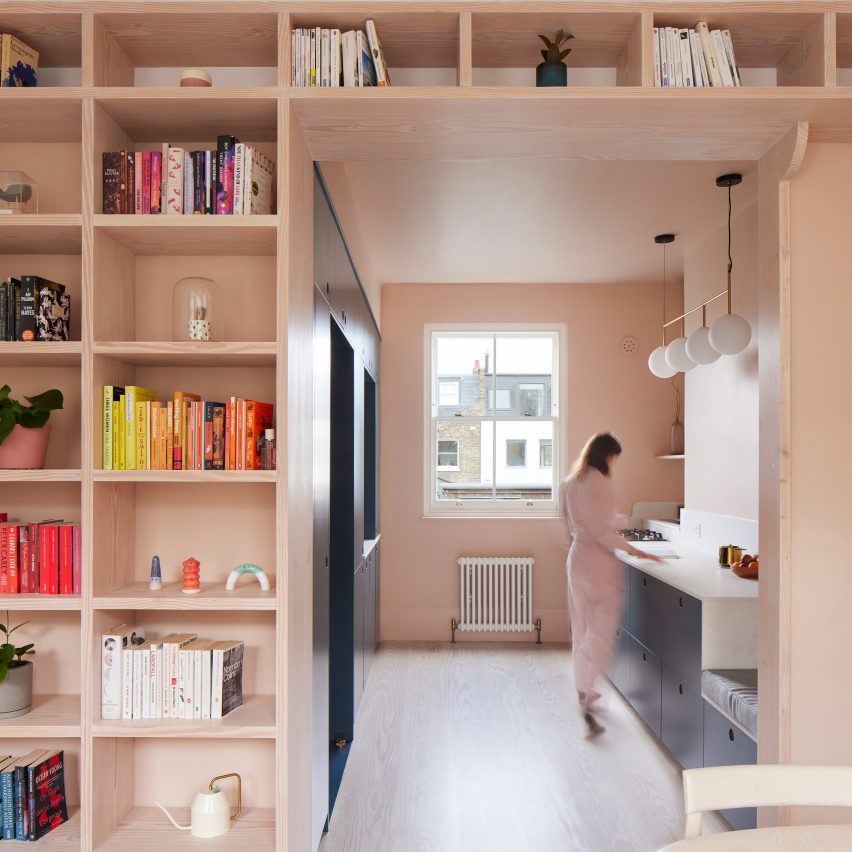 Studio Merlin has revamped a Stoke Newington flat for its founder, Josh Piddock, by incorporating an abundance of storage to form serene, clutter-free living spaces.

The project’s nickname, Maison Pour Dodo – which loosely translates from French to “house for sleep” – was inspired by Piddock’s desire for a tidy, restful home that had little material noise.

To achieve this brief, Studio Merlin decided to install a range of storage throughout the two-floor flat that could comfortably accommodate Piddock’s and his girlfriend’s belongings.

“The ‘spectrum of storage compression’ idea was taken from previous work assessing museum collections where some objects are in dense storage and others are on display and readily accessible,” explained Piddock, who founded Studio Merlin in 2020.

“We all filter and organise to some degree and the answer is more cupboards and shelves, but specifically repurposed for a domestic setting,” he added.

“The real principle is of auditing one’s possessions to create a hierarchy between household articles that reflect their value, favour and practical needs on a daily basis.”

One of the first rooms Studio Merlin tackled was the flat’s living and dining area, where a large floor-to-ceiling shelf has been erected to hold the inhabitants’ collection of books and ornaments.

At the heart of the space is a plump blue sofa by Muuto, which directly faces onto a wall where the inhabitants will project tv shows and movies. This solution was chosen instead of a television to avoid the space becoming “dominated by consumer electronics”.

The room’s warm, plaster-coloured surfaces and pale Douglas fir floorboards are also meant to add to the calming ambience.

A newly created opening looks through to the kitchen, where there’s a wall of deep-set IKEA cabinets with smokey blue door fronts from Danish brand Reform.

Matching low-lying cabinets run along the other side of the room, topped by a concrete counter where food can be prepared.

In the corner of the kitchen, there’s also a small seating nook above which are a series of open, pantry-style shelves where the owner can display jars of cooking ingredients.

A paint in a similar shade of blue as the kitchen cabinetry has been applied on the white walls of the apartment’s stairwell to form a faux balustrade.

Stairs on the first-floor landing are fitted with what the studio describes as “in and out storage”, designed to hold day-to-day essentials that inhabitants need to grab before heading out the door.

The second-floor landing houses more storage cupboards, one of which has been punctuated with an arched cut-out through which Piddock’s cat can access its litter tray.

This second level of the home accommodates the sleeping quarters. In the principal bedroom, built-in wardrobes help to neatly conceal the inhabitants’ clothes.

Douglas fir offcuts have also been used by the studio to fashion custom curved bedside tables, where books and other trinkets can be tucked away.

Part of the original bedroom was sectioned off to allow space for a tub in the adjacent bathroom, which features terrazzo-style flooring and gold-tone hardware.

Storage has been considered here, too – above the toilet is a series of vanity cabinets that have been made to sit flush against the room’s dark green walls.

“The effect is a composed space where each thing has a home; sometimes concealed, densely packed and understated, others as pride of place, carefully curated and easily physically or visually accessible,” concluded Piddock.

London’s trendy Stoke Newington neighbourhood is host to a number of design-focused homes.

Others include Two and a Half Storey House, which has an extension that’s hidden from the street, and Gallery House, which features a huge storage wall where the owner can display his personal collection of ceramics and glassware.

Photography is by Richard Chivers.

The post Maison Pour Dodo by Studio Merlin is a north London flat with a "spectrum of storage" appeared first on Dezeen.