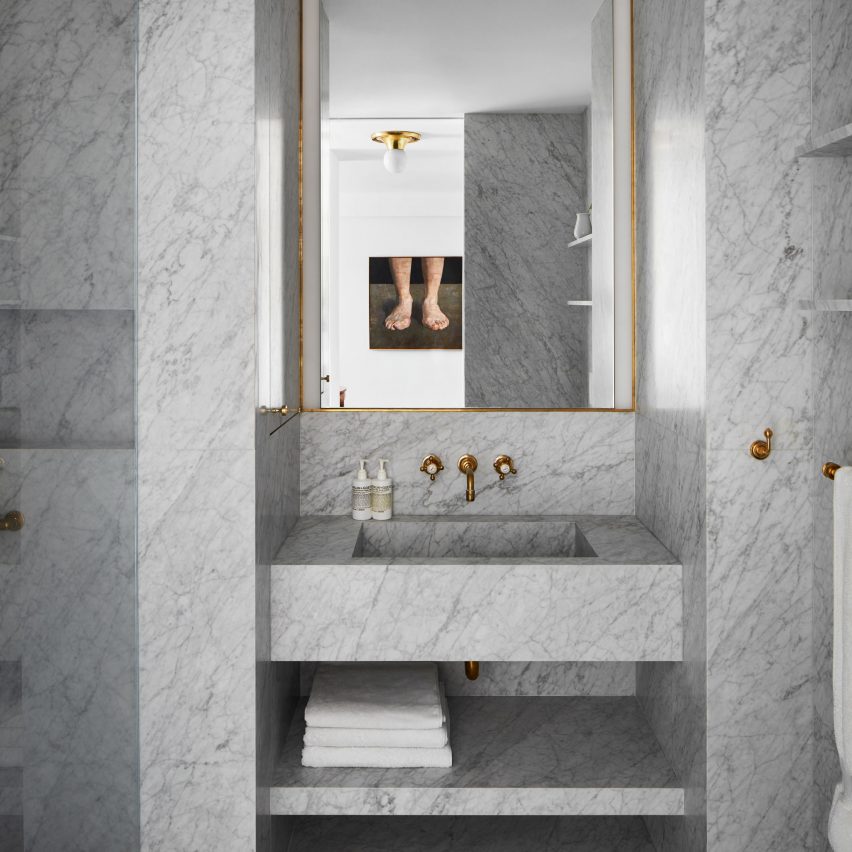 New York studio Messana O’Rorke has extended its collaboration with skincare brand Malin + Goetz by designing an apartment for its founders on Manhattan’s Upper West Side, where special attention was paid to the bathrooms.

After creating store interiors for the brand across the US for several years, Messana O’Rorke turned its attention to a space for co-founders Matthew Malin and Andrew Goetz to live in.

The apartment on West 76th Street was fully renovated for the couple to reflect their passions for beauty and wellness, while embracing the building’s history.

“The space creates a gentle push and pull between the comfort of the past and the vigor of the present – embedded in the architectural details,” said Messana O’Rorke.

These details include a traditional baseboard that encircles the main living spaces but ends abruptly in the central vestibule, where it is replaced with a quarter-inch (0.6-centimetre) shadow gap between the walls and floor for a more modern look.

Reclaimed oak parquet flooring is laid in a herringbone pattern throughout most of the rooms, providing the air of a European pied-à-terre.

A simplified version of a plaster relief detail – found during the demolition of a dropped ceiling in the bedroom – also wraps the wall and ceiling junctions, suggestive of crown moulding.

While these details all tie the living spaces together, it’s in the bathrooms that Messana O’Rorke has made the most dramatic interventions.

“Given that the homeowners are the founding partners of Malin + Goetz, Messana O’Rorke paid particular attention to the design of the two bathrooms, which reflect the beauty brand’s ethos as a modern apothecary,” said the studio.

Unlacquered brass fixtures and hardware are installed against Carrera marble, which clads the walls, floors and showers to create a “spa-like” feeling.

In one bathroom, mirrors surrounded a window above the sink, where more brass is used to line the recess and forms a trim around the perimeter.

A shower is illuminated from a hidden pocket in the ceiling, giving the illusion that the stone wall is washed with daylight. 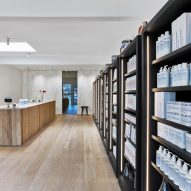 The same marble is continued in the narrow kitchen as countertops and backsplash, keeping the space light in tandem with white cabinets and stainless steel appliances.

Furniture is a blend of contemporary and vintage, mixing dark woods with sofas in muted velvet upholstery.

A variety of artworks decorate the living room and den walls, while a large collection of books fills shelves in the office – both providing more colour and personality to the apartment.

“Much like the Malin + Goetz boutiques the firm had previously designed, a single vintage display element subtly offsets the taut architectural envelope; the furnishings and interior appointments bridge the traditional and the modern,” Messana O’Rorke said.

The studio was founded in 1996 by Brian Messana and Toby O’Rorke, and has previously renovated an 18th-century home in Upstate New York.

Renovations on the Upper West Side completed by other studios include a residence by Stadt Architecture where existing brickwork walls were paired with walnut floors and a 1920s apartment overhauled with custom millwork by Format Architecture Office.

The photography is by Stephen Kent Johnson.