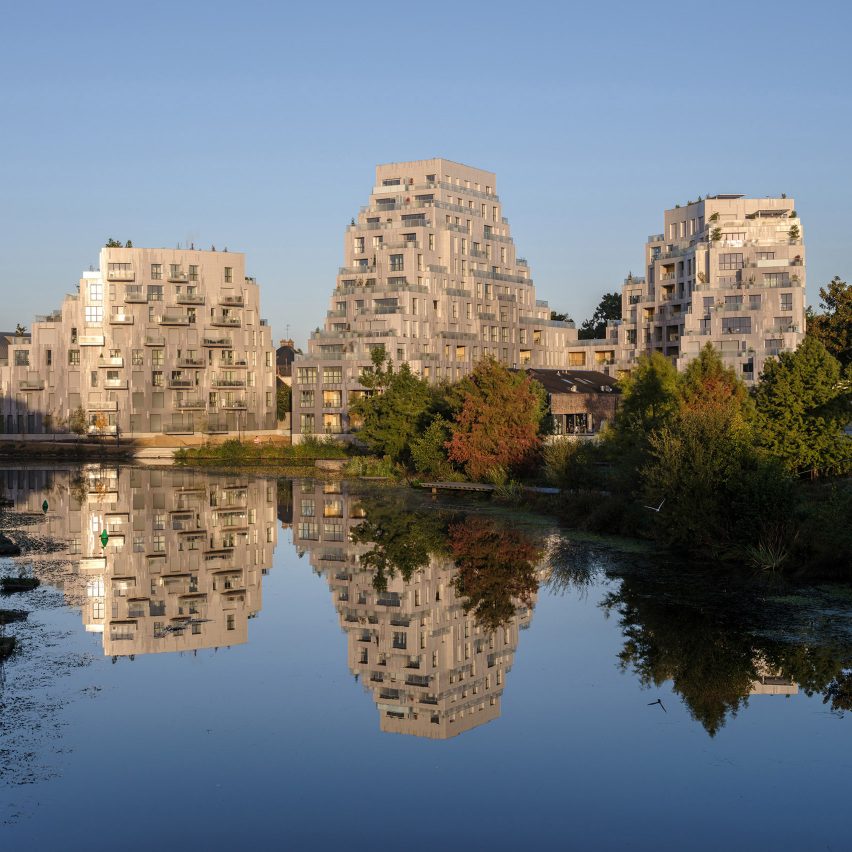 A pair of hill-like buildings define Ascension Paysagère, a French housing project that Dutch architecture studio MVRDV has created on the riverside in the west of Rennes.

Designed in collaboration with local studio ALL, the 10,550-square-metre complex contains a mix of apartment types to accommodate “a variety of income levels”, MVRDV said.

Ascension Paysagère is located on a site beside a park where the Ille River meets the Vilaine and provides 138 homes over the two terrace-covered buildings.

MVRDV and ALL created the project for real estate developer Groupe Giboire with the aim of supporting the city’s population growth.

“In Ascension Paysagère, we have delivered a project just as we hoped it would be, and exactly what is needed in this location”, said MVRDV founding partner Nathalie de Vries.

“With the river and the park opposite, the site offers a wonderful location for people to live.”

De Vries said that the aim of designing the housing “without destroying” the natural qualities of the site led the studio to create a complex that mimics geological formations.

“We do this by creating an ensemble of two buildings with silhouettes like small hills, covered with terraces and balconies to allow the inhabitants nice outdoor spaces that are already provided with large pots for plants and trees.”

According to MVRDV, the choice of site in the city’s outskirts was prompted by the outward growth of Rennes.

This is the result of an expanding population but also the presence of many heritage buildings in the city’s centre, preventing new developments there.

One big and one small, the two buildings at Ascension Paysagèr both feature staggered facades that ascend to form the three peaks.

The low-lying parts of the buildings are positioned closest to the river and existing buildings. Meanwhile, its tallest areas, which reach a maximum of 12 storeys, are positioned at the centre of the plot.

Inside, 37 of Ascension Paysagère’s apartments are available for social rent, while 42 are for sale as affordable housing. The communal spaces are open to all residents.

In the smaller building, 34 of the apartments are designed to the low-energy Passivhaus standard, using high levels of insulation and airtightness.

Many of the apartments have multiple windows, ensuring they are naturally lit and ventilated, as well as access to either a terrace or balcony.

The terraces, which are formed from the staggered edges of the building, are all lined with custom planters connected to an automatic irrigation system.

There are also dedicated water taps to allow residents to care for the greenery themselves.

According to MVRDV, the greenery was incorporated into the design to extend “the lush atmosphere of the riverbank upwards to the apartments”. 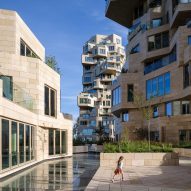 The same ambition led the team to introduce a garden landscaped with fruit trees on the west corner of the larger building, slotted between the two peaks.

Ascension Paysagèr’s facade is finished in a mix of grey-hued ceramic tiles that have both matte and glossy finishes.

The tiles lighten in colour and glossiness towards the top of the blocks and are intended to contribute to their hill-like aesthetic.

“The design seems as if it truly belongs – an outgrowth of the environment itself, which feels natural even as it significantly densifies this part of the city,” said MVRDV.

Alongside housing, Ascension Paysagèr has commercial and public spaces at ground level, positioned alongside a pedestrian thoroughfare between the two blocks.

The path connects to a plaza that meets the river, as well as an existing restaurant and theatre called Le Bacchus that is hugged by the larger building.

Another existing building that has been incorporated into the project is a former tax office, which sits on the public square.

The housing is complete with garages with bike storage and electric charging stations, as well as a series of spacious wood-lined meeting spots that puncture the facade of the larger building.

Ascension Paysagère is not the first building by MVRDV to resemble a geological formation. In 2021, it created the controversial hill-like Marble Arch Mound in London, which is now being repurposed in the redevelopment of a nearby estate.

In Amsterdam, it created the mountain-like Valley skyscraper, which contains apartments, offices and restaurants.

The photography is by Ossip van Duivenbode.