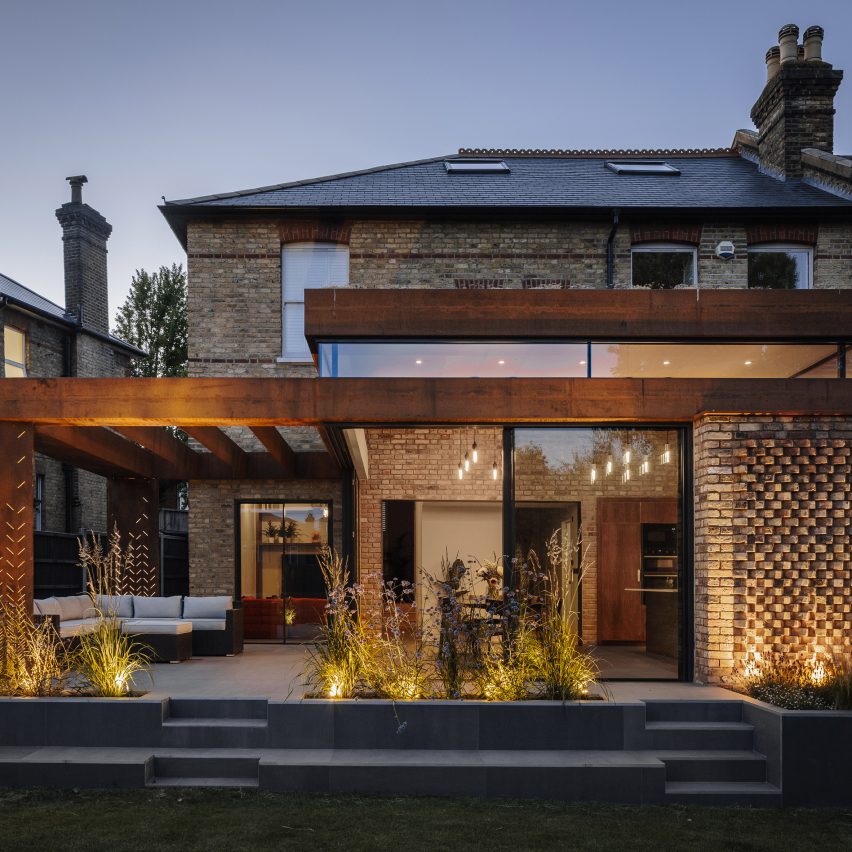 Architecture studio Selencky Parsons has extended a Victorian house in south London, adding a steel-framed structure and sliding glass doors that its interior with a large terrace.

Named The Weathered House, the project was designed for a client who requested improvements to the living spaces of their semi-detached property in Sydenham.

Selencky Parsons remodelled the home’s ground floor to transform its cellular arrangement into a series of light-filled spaces with a better connection to the rear garden.

A small existing extension was removed to make way for a new kitchen and dining area, contained within a single-storey volume added directly to the original brick elevation.

“Our solution was to add a lightweight ‘pavilion’ that nestles up against the rear wall of the house, touching it lightly,” explained Selencky Parsons.

“The rear London stock brick wall of the original house remains clearly legible, forming the backdrop to the new spaces which sit in front of it.”

An opening that was knocked through to join The Weathered House’s new and existing spaces provides access to a snug with sliding doors connecting to the terrace.

The central staircase separates the snug from the entrance hall, which steps down to the level of the extension. This drop in height helps to mitigate the level change between the internal spaces and the garden. 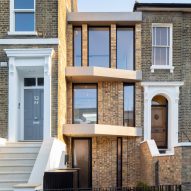 Outside, the extension is characterised by a weathering-steel structure that extends across from the kitchen and dining area to form a pergola above the outdoor dining space.

Glazed corner windows allow the extension to open up to the garden, with flush thresholds enhancing the sense of continuity between inside and outside.

Brick piers that help support the steel pergola feature areas where the bricks are laid at an angle to add texture to the surface. Internally, they enclose built-in kitchen cabinetry.

The Weathered House extension is topped with a second steel and glass volume that includes clerestory windows, bringing height and additional daylight to the internal spaces.

On its far end, the structure is supported by chamfered weathered-steel columns decorated with angled cuts that reference the relief surface of the bricks.

Within the original part of The Weathered House, a former reception room was repurposed to accommodate a cloakroom and bathroom accessed from the hall. A separate utility space was also added next to the kitchen.

Sam Selencky and David Parsons founded their eponymous office in 2014. The studio works across a diverse range of sectors, scales and settings, with previous projects including a skinny house squeezed between the brick piers of a Victorian coach house.

The studio also created a cork-lined pod when designing its own office in south London, and has also converted a large London residence into affordable shared housing for a group of music students.

The photography is by Felix Mooneer.