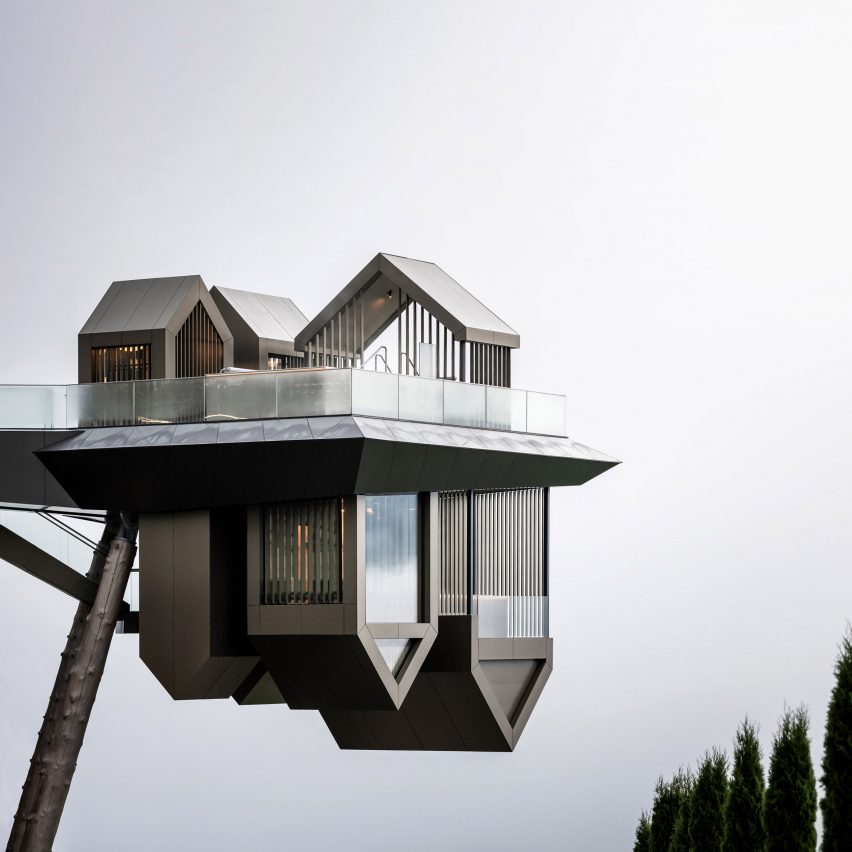 Network of Architecture referenced reflections in water when creating the Hub of Huts, a well-being area that appears to defy gravity at the Hotel Hubertus in South Tyrol.

Supported by large tree-like columns, the structure sits close to a projecting glass-bottomed pool that Italian studio Network of Architecture (NOA) created for the Italian resort in 2016.

Hub of Huts is characterised by a group of inverted and upturned micro-structures with gabled roofs that collectively form a “zen-like refuge” for the Alpine hotel.

Together, the structures are intended to evoke “the architecture of a mountain village” mirrored on water through a play on sightlines and horizons.

“We thought about the possible activities such as standing, sitting, swimming, floating horizontally, diving upside down,” he added. “Each of these positions have a different horizon, and from this interplay of perspectives, the idea of the project came to life.”

According to the studio, the project was a challenge because the hotel “already found its symbol in the swimming pool”. Achieving the studio’s gravity-defying vision structurally was also no mean feat.

“An imposing steel cantilever structure supports the platform, which even brought the engineers to the limits,” Rungger explained.

“The asymmetrical assembly was a huge structural challenge, including a complex allocation of technical compartments hidden inside the houses.”

Hub of Huts is located on the southeast side of the Hotel Hubertus, parallel to the swimming pool. It forms a “natural continuation” of the resort’s existing well-being zone.

By dividing the facilities across the series of micro-structures, NOA ensured the project was human in scale, aligning with its goal of emulating a village.

“The positioning of the micro-structures recalls the layout of a mountain village,” added Rungger.

“One moves from space to space as one goes from house to house, from warm to cold, from dry to wet, from up to down.”

Similarly to the neighbouring pool, the extension projects out from the hotel’s main building on a platform raised 15 metres above ground. It is accessed by a suspended walkway.

This deck is supported by a cantilevered steel slab and two large steel columns that are clad in larch, disguising them as tree trunks.

On the upper level of the Hub of Huts platform are two pools, alongside panoramic showers and a changing room.

Below, where the huts appear to be anchored upside down, the lower level has a foyer, two saunas, showers and a third outdoor pool. Here, the inverted gables allowed NOA to hide a water purification system for the pools and form the tiered seating for the saunas.

“The lower level of the platform causes a feeling of estrangement in the observer,” reflected supervising architect Gottfied Gruber.

“As one descends, the temperature rises, and the environment becomes more protected. It feels like a descent into the centre of the earth, with the poles reversing.” 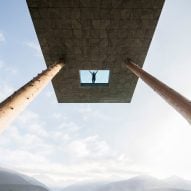 Glass-bottomed pool by NOA projects out from Alpine hotel

The materiality for the project was chosen to complement the dusky hues of the mountain scenery, with brown-hued aluminium panels cladding the cabins.

On some of the micro-structures, NOA has incorporated a brise soleil shading system in the same material and colour.

Inside is a similar earthy material palette, including light beige ceramics and wooden detailing such as oiled white-oak flooring.

According to the studio, these materials are hoped to create a calming atmosphere while retaining focus on the ever-changing mountain views framed through the glazed openings.

Founded by architect Rungger with Stefan Rier, NOA is an architecture and design studio with studios in Bozen, Italy, and Berlin, Germany.

The cantilevering pool that the studio created at the Hotel Hubertus in South Tyrol aims to offer holidaymakers the sensation of floating and also features a material palette that is designed to echo the mountain scenery.

Elsewhere in South Tyrol, the studio created a “treehouse” hotel that is raised on stilts above a park and completed the Ötzi Peak 3251m viewpoint above a glacier.

The photography is by Alex Filz.