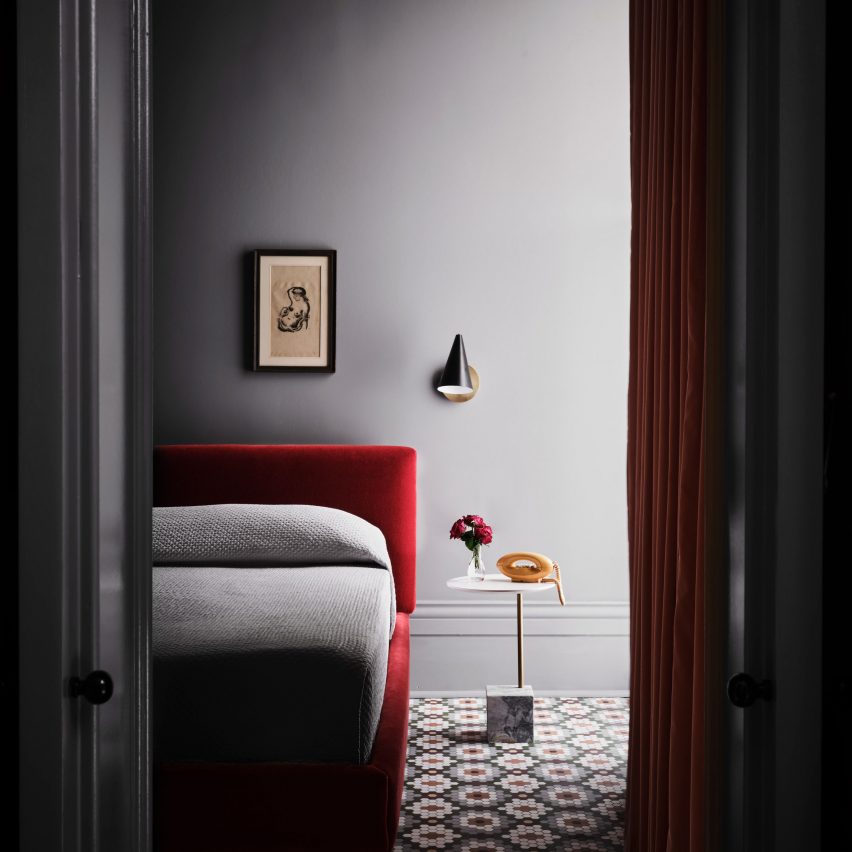 Moody grey rooms add to the spooky ambience of this hotel in New Orleans that occupies a 19th-century infant asylum renovated by Lambert McGuire Design.

Hotel Saint Vincent is housed within a red-brick building that was founded in 1861 as The Saint Vincent’s Infant Asylum.

Set among the Greek Revival and Italianate mansions of the Lower Garden District, the new 75-room hotel is operated by Austin-based McGuire Moorman Lambert Hospitality with interiors by its sister firm Lambert McGuire Design.

The team kept the building’s exterior including the decorative wrought-iron railings typical of the city largely as original but subtly updated it.

Inside, they opted for an eclectic mix of design styles that range from 20th-century Italian to mid-century modern and art deco.

“The property’s original grand staircase and wide sweeping corridors remain intact, allowing for an open layout with both bright and airy common areas as well as moodier, hidden corners adding a touch of discovery,” said the hotel operators.

One of the most dramatic decisions was to paint the walls and ceilings of the guest rooms dark grey. Paired with red velvet upholstery, this heightens the sinister atmosphere conjured by the building’s history.

However, some of the rooms are enlivened by patterned rugs and psychedelic accent walls, which continue into the bright red and pink bathrooms that feature curvaceous white tubs.

Dark grey is also used liberally in the Chapel Club, a guest-only cocktail bar designed “to recreate the look and feel of classic grand hotel salons”.

Entered via a neon-lit passage, the space includes a black and white marble countertop, and hot-pink velvet bar siding.

Among Hotel Saint Vincent’s dining options is the San Lorenzo restaurant, which serves Italian food with a local Creole twist in a grand room with pale green panelling and a checkered floor.

The Elizabeth Street Cafe, a French-Vietnamese-style cafe and bakery, is located adjacent to the main hotel building and spills out into a courtyard garden.

There’s also a bar beside the outdoor swimming pool surrounded by loungers and tropical plants in the central area formed by the hotel’s three buildings.

Of the hundreds of insane asylums that were built across the US towards the end of the 19th century, and used up until the 1970s, many are now eerily abandoned.

But Hotel Saint Vincent isn’t the only one that has been revived as accommodation: Deborah Berke Partners also restored and redesigned a former psychiatric hospital as a hotel in Buffalo, New York.

The unique history and culture of New Orleans, or NOLA, spans architecture, food and nightlife – making the city a popular tourist destination filled with hotels for various tastes.

For those seeking the grandeur of the Garden District or Uptown, other options include Hotel Henry Howard or The Chloe hotel, while the trendy Warehouse District is home to The Eliza Jane, the Ace Hotel, and Maison de la Luz – which was a winner at the 2020 AHEAD Awards.

Lambert McGuire Design was founded in 2019 as an architecture and design studio specialising in hospitality. Co-founder Liz Lambert is behind properties including the Austin Motel, San Francisco’s Phoenix Hotel, and the Hotel San Cristóbal Baja in Mexico.

Photography is by Douglas Friedman, unless stated otherwise.