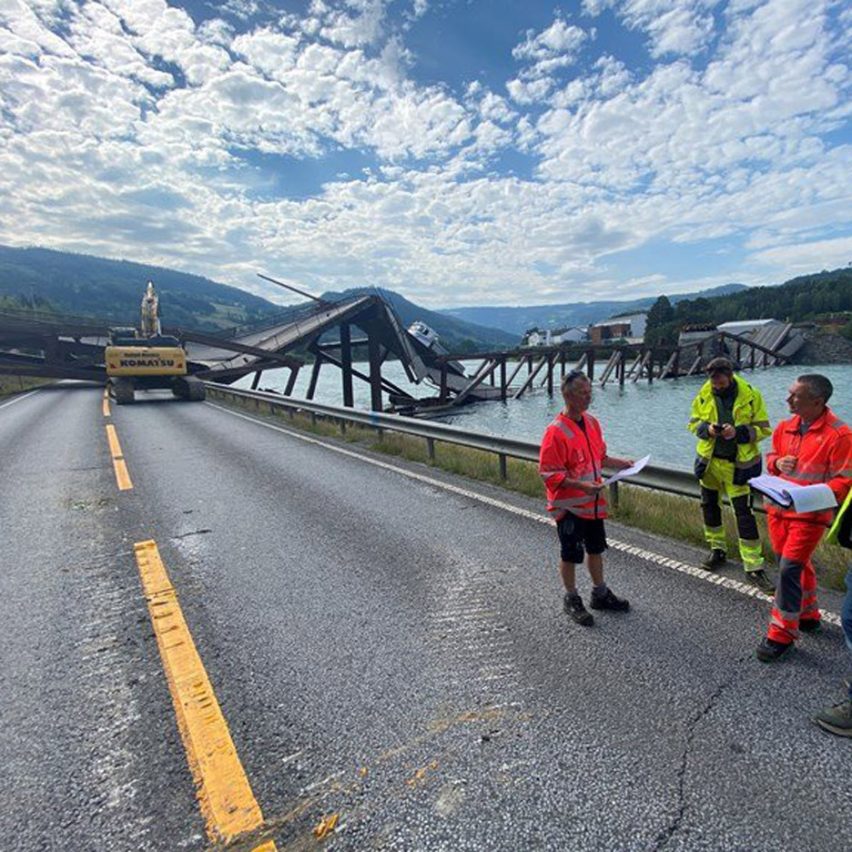 A 10-year-old timber-and-steel bridge in Norway has collapsed into a river while vehicles crossed, causing two drivers to require a dramatic rescue.

Tretten Bridge, near Gudbrandsdalen in the Øyer area of southern Norway, gave way on Monday morning causing a car to plunge into the water and a lorry to be trapped on a fallen section of road. Both drivers escaped unharmed.

The structure was designed by Norwegian architecture studio Plan Arkitekter and only completed in 2012. The engineer was Norconsult and the contractor was Contexto.

“This was a bridge that we were proud of”

“We have designed most of the larger wooden bridges in Norway as well as many smaller wooden bridges,” said Plan Arkitekter partner Oddmund Engh. “Our contribution to the bridge design is only concept and aesthetics, not calculations or construction drawings. This was a bridge that we were proud of.”

“We have no information or knowledge about the cause of the collapse,” he told Dezeen. “Investigations will reveal what failed so we will not speculate on the cause.”

Norway’s roads authority and Innlandet County Council, which owns and maintains the bridge, have ordered an external investigation into the collapse. All other timber bridges in the region will also be inspected.

“We must have a complete and independent review of the incident,” Norway’s road director Ingrid Dahl Hovalnd said in a statement. “It must be safe to drive on Norwegian roads. That is why it is important to get to the bottom of this matter.”

A review of the country’s wooden truss bridges, including Tretten Bridge, was previously conducted in 2016 following the collapse of Perkolo Bridge another timber crossing also in Gudbrandsdalen.

It found “no significant errors” (translated from Norwegian) with Tretten Bridge but recommended that one of its joints be strengthened and some dowels replaced. 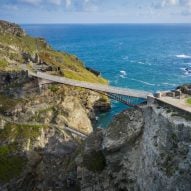 The Dezeen guide to bridge design and architecture

The council also carried out a full inspection of Tretten Bridge in 2021 and a further inspection on 3 June 2022, according to the Norwegian Public Roads Administration.

Located on county road 254, Tretten Bridge provides access to the village of Tretten and was commissioned to replace a single-lane steel bridge constructed in 1894.

It was 148 metres long and 10.5 metres wide, with a main span of 70 metres. According to a report produced in 2013 by Plan Arkitekter and Norconsult, the bridge had a life expectancy of 100 years. 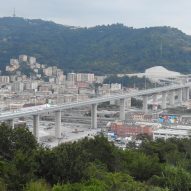 The bridge’s main truss was built from glued laminated timber (glulam), with Corten steel beams and stone pillars. It is now expected to be demolished on Wednesday morning, Innlandet County Council said.

Norwegian broadcaster NRK reported that police “will question professionals to find the cause of the collapse”.

Plan Arkitekter and Norconsult have worked on multiple other bridge projects together, including the Flisa Bridge completed in 2003, which the studio’s website claims is the longest wooden traffic bridge in the world at 196 metres.

The top photo is by Per Kollstad courtesy of the Norwegian Public Roads Administration.