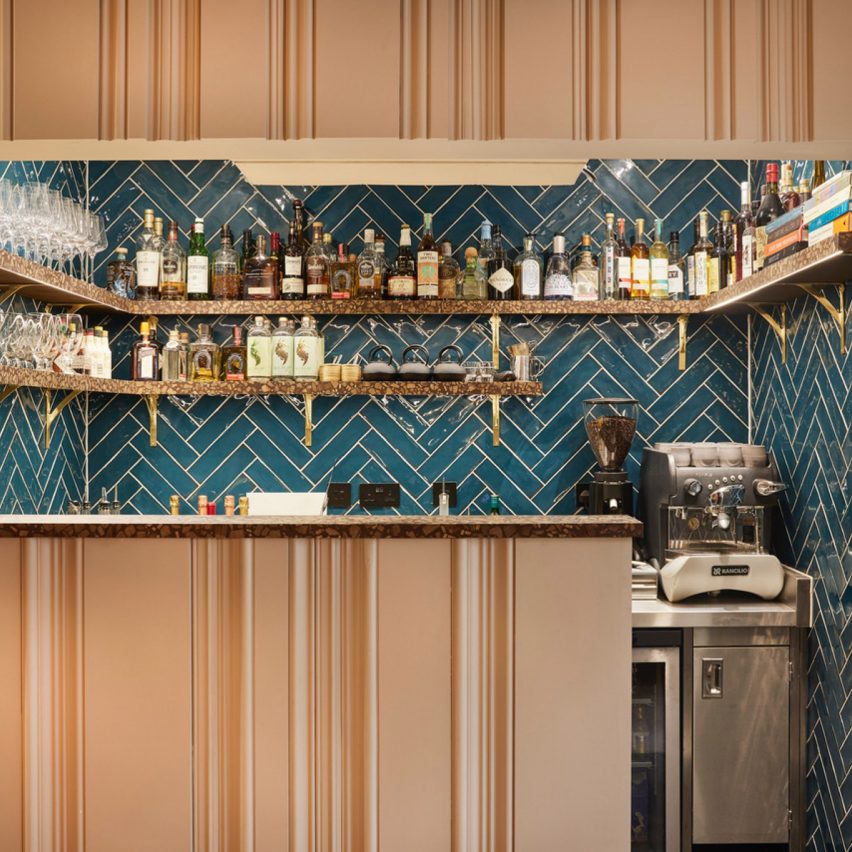 The project has been shortlisted in the sustainable interior category of Dezeen Awards 2022, which will announce its winners next week.

Part of the refurbishment involved removing a timber staircase to maximise usable floor space in the basement.

Object Space Place retained the staircase’s treads to reuse them for a new staircase and repurposed the rest of the usable material into decorative timber block wall cladding.

“We saw the old staircase as a materials bank full of wood that we could reuse, so we worked with the contractor to take the staircase apart carefully, grade the timber that was usable and create a repeating block pattern that could be made from these timber components,” Object Space Place told Dezeen.

“The timber wall finish has also been installed on a split batten system, so even if someone wants to change this in the future it can be done relatively easily.”

Architraves and skirting boards removed from the interior were reused to cover the front of the restaurant bar, creating a vertically grooved surface.

The practice overhauled the space to expose some of the original finishes, including brickwork, timber floorboards and aged walls. 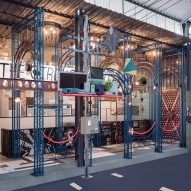 The Circus Canteen interior is a "collage of unwanted items"

“Customers really love the walls, which is interesting as these are simply what we found when we removed the blank white plasterboard wall linings on the ground floor,” said Object Space Place.

“This really epitomises what we discovered about working with waste and the circular economy – the extra effort you have to put in rewards you with a space rich in stories and these stories help add to a dining experience that exemplifies going the extra mile.”

Mechanical, electrical and plumbing (MEP) equipment was retained where possible and reclaimed furniture, sinks and mirrors were sourced to fit out the restaurant, including second-hand dining chairs that were reupholstered to suit the design scheme.

In instances where reclaimed items could not be acquired, new elements with sustainable qualities were used instead, including terrazzo-like surface material by Foresso made from recycled timber and lampshades made from oyster shells or waste coffee grounds.

Object Space Place designed the refurbishment according to its Restorative Design Framework initiative, which is based on circular economy principles.

“We developed a true benchmark in sustainable design and fit-out by applying the principles of a circular economy, particularly designing out waste and pollution and keeping natural resources in use,” the studio explained.

According to Object Space Place, the project achieved a reduced embodied carbon footprint of 45 per cent compared to refurbishments of similar-sized restaurants where new furniture and finishes were applied.

Other restaurants that feature reclaimed materials include an eatery in Madrid with interior features made from upcycled junk and a restaurant in Bangalore decorated with discarded bicycle bells and cassette tape boxes.

The photography is by Ben Carpenter.