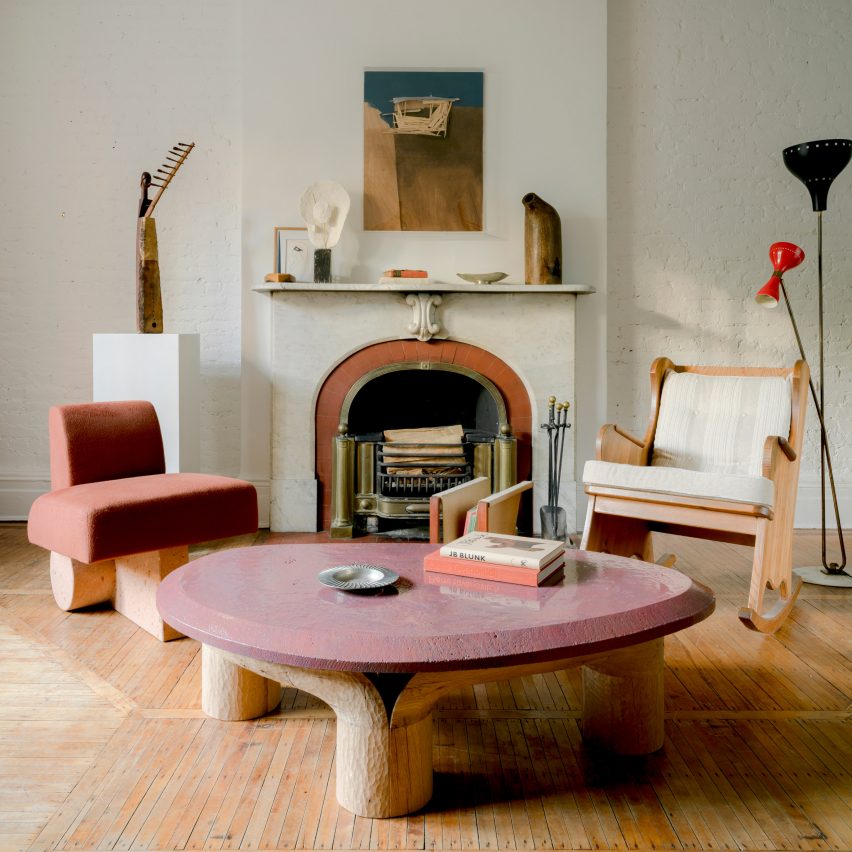 The dampening of creativity brought on by the coronavirus pandemic has prompted interior designer Olivier Garcé to transform his New York home into a show space for contemporary art and design.

The apartment, located on the third floor of a pre-war brownstone in the West Village, has been completely reimagined with works by Garcé‘s friends and colleagues, which include collectible furniture, experimental ceramics, decorative lighting and original artworks.

The idea was born out of a discussion between Garcé, who until recently was director of Pierre Yovanovitch‘s New York studio, and friend Ian Felton, a collectible furniture designer.

The pair wanted to find opportunities for inspiration and collaboration at a time when they would be largely confined to their homes. Knowing that others were feeling the same way, they came up with a brief that they could invite other creatives to participate in.

“Everything was closed, but I was having a lot of conversations with designers and they were all looking to do something,” Garcé told Dezeen. “So we decided to bring all of these people together.”

Some of the pieces they are presenting were designed specifically for this project.

“It was very interesting to push these guys to create new pieces,” said Garcé. “The New York spirit is so good; every time we proposed this idea, people were so happy to be involved.”

Felton, who spent most of the lock-down period on a farm in upstate New York, created three new pieces especially for this project. The most striking of these is a coffee table with three carved wood legs and a pink-glazed lava stone surface.

Positioned in front of the fireplace, it sits alongside the carved stone form of Felton’s Kosa side chair and a vintage Axel Einar Hjorth rocking chair.

Kim, who works in the studio of interior designer Giancarlo Valle, contributed a range of designs, including the sculptural Oyster Lamp displayed on the mantle, the two-eared Lola Chair and a floor lamp with an unusual lacquer shade.

A folding screen of green-painted bamboo was created by Green River Project, along with one of the studio’s popular raffia-topped Half Moon stools.

Garcé also added his collection of vintage furniture and artworks to display, which include a hand-carved wooden mask sourced from a Portuguese village, paintings by Imi Knoebel and Claire Tabouret, and Swedish Grace tableware.

The designer said that living in this space was “like being in a dream”.

Garcé and his partner, architect Clio Dimofski, opened the space up to visitors on a by-appointment basis. However things have had to change over time – not have some of the pieces been sold, but Garcé and Dimofski have just had a baby.

However, the concept will continue in the future. Garcé has now bought an apartment in Lisbon, which he also plans to turn into a gallery.

“The interior will be a mix of classical, vintage and contemporary,” he said. “The idea is to bring Portuguese crafts – ceramics, wood, fabrics – and bring those together with these creative people from New York.”

“The model works well,” he added. “The goal isn’t to make money, but just to make something really creative at this moment.”

Photography is by Sean Davidson.