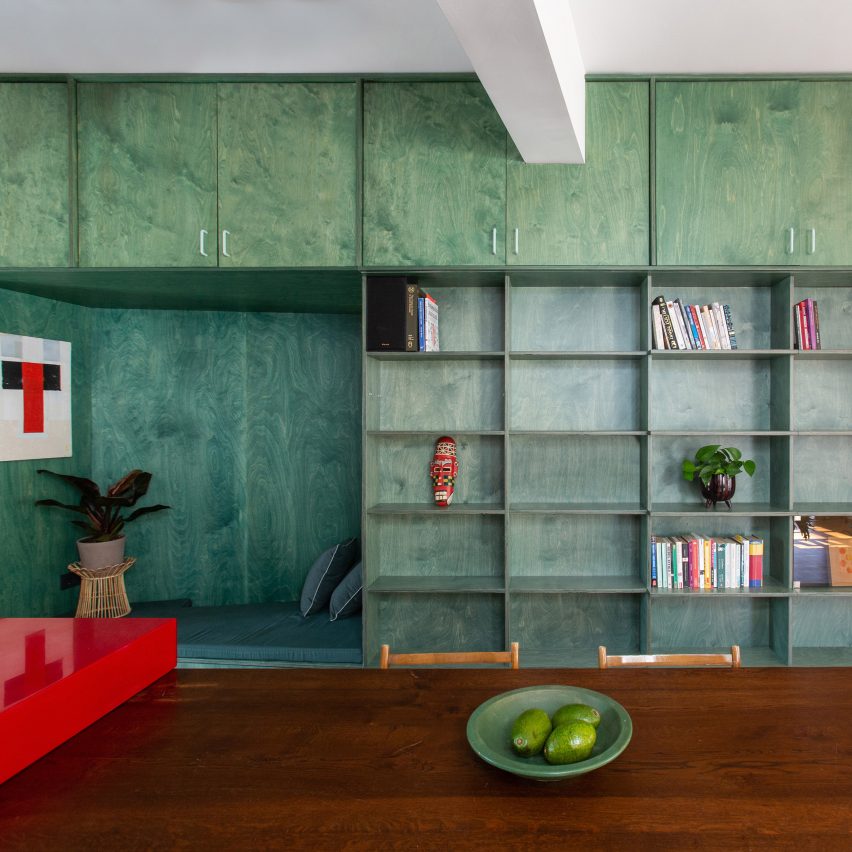 Located in the centre of the city on the sixth floor of a 1980s Athenian polykatoikia — a concrete residential block made up of family apartments with tiered balconies — the two-bedroom Trikoui apartment is owned by a young couple.

Previously, the apartment was small and cramped with small rooms and corridors, and natural light and views outside were very limited. The owners wanted to open up the interior to create a brighter space that was more suited to modern living.

Central to the renovation was making use of a previously enclosed light shaft that pierces through the centre of the apartment.

The architects installed generous windows on all four sides of the concrete shaft, which now brings light into the apartment’s formerly dark interior.

In the absence of partition walls, a number of colourful built-in custom furniture pieces help to define different zones and functions in the open-plan space.

These include a storage wall made from stained green plywood that runs along the entire length of one side of the apartment.

A light-pink kitchen with a marble countertop wraps the central lightwell, while a nearby cabinet island in dark pink houses appliances.

The bespoke wooden dining table with a steel frame that runs alongside the kitchen doubles as a kitchen island with a red Corian hob area.

“The clients also like to cook and have friends over,” explained the architects.

“So we decided to open up the kitchen and ‘spread’ it into the space, so that cooking and preparing a meal becomes a social activity, connected and at the heart of what is going on in the apartment. It is not even a room, but a collection of objects.”

The entrance area is wrapped by a timber framework screen and a wall of bright blue wardrobes span the hallway between the two bedrooms. The gold curtain that conceals the apartment’s study is an element that appears in many of the studio’s projects.

“It is a very unexpected, ‘formal’ element that appears in an informal way, in the periphery, in a relatively non-descript space,” explained the studio. “So the curtain inverts this condition and inspires a playful attitude.”

Flooring finishes also help to define the different spaces: a mosaic floor outlines the kitchen area, while an oak parquet is used throughout the living area. Blue square tiles and stone are used in the bathrooms and a red epoxy-paint floor marks the entrance.

“Colour and materials are used throughout the space strategically, to formulate characters of the various constructions, furniture, elements,” the studio said. “They work through complementarity; they organise relationships and oppositions.”

“One of the first elements that was decided upon was the pink-coloured light shaft, which works in continuity with the warm, wooden floor of most of the apartment. The long green-stained plywood storage wall has texture, which contrasts with the soft-pink colour of the shaft,” the studio continued.

“The different colours and textures work differently with the light, some reflect and some absorb it, so the space really works fantastically with the different light conditions, during the course of the day.”

Point Supreme Architects, founded in Rotterdam in 2008 by Konstantinos Pantazis and Marianna Rentzou and now based in Athens, is known for its use of vibrant colour, pattern and texture.

In 2015, it added patterned tiles, geometric screens and a bright yellow staircase to another apartment in the Greek capital to create a Postmodern interior.

Photography is by Yannis Drakoulidis.