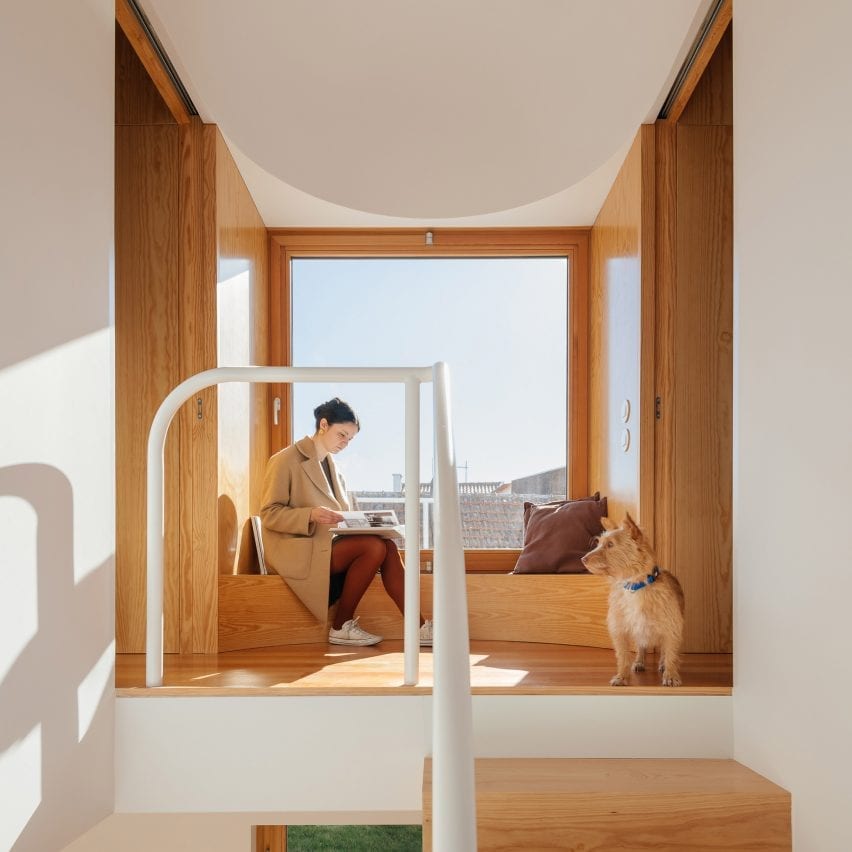 REDO Architects had stage sets in mind when redesigning the interiors for a pair of houses in the former Puppeteers’ Quarter in Sintra, Portugal.

The two homes, now known as Puppeteers House, are part of a series of buildings that were originally built for a local puppeteer’s family, but had more recently been used as storage for farming tools.

With its renovation, Lisbon-based REDO Architects has brought the buildings back into residential use as homes for two of the puppeteer’s great grandchildren.

The revamped buildings are designed to capture the spirit of their heritage, with lightweight wooden joinery constructions that evoke theatrical scenography and circular details that suggest a playful character.

An all-new interior layout was needed, so this was designed to reinforce the theatrical feel.

Elements like the staircase and first-floor window seat have a stage-like quality, while secondary spaces like bathrooms are concealed within the walls.

“The relation between the existing external walls and the new interior walls – two different skins – was explored and dramatised throughout the project on different scales,” explained studio founder Diogo Figueiredo.

“This friction generated misalignments, which are expressed in the windows as opaque panels,” he told Dezeen, “and it also created in-between spaces for built-in furniture and bathrooms, like a back-of-stage area.”

One of the houses is single-storey, the other is double-storey, and they are located either side of a private courtyard.

The buildings are designed to function as self-contained properties, but they are also very open to one another, with large windows fronting the shared courtyard garden.

The smaller of the two homes contains a living space with a kitchenette, a separate bedroom and a bathroom.

The other home has a similar layout, with a living room and a separate kitchen and dining space on the ground floor, and two en-suite bedrooms upstairs.

A consistent materials palette features throughout. An ivory-toned regional stone known as lioz was used flooring in the main living spaces and surfaces for the kitchen and bathrooms.

Flooring in the bedrooms is wood, matching the doors, furniture and shelving that feature throughout the two homes.

Circular details feature throughout the interiors, at a range of scales. Some are full circles, like the porthole window and cabinet handles, while others are large curves, like the window seat or the rounded wall partitions.

“We used a precise quarter of a circle as a tool – like a compass – in different radii, orientations, combinations and materialities,” explained Figueiredo.

“It was explored in different moments of the project: to differentiate and disconnect the new internal layer from the existing walls, to connect different rooms, and to create smooth circulation routes,” he said.

Many of these curves are mirrored in ceiling details directly overhead, which contrast with the linearity of the exposed roof beams.

Other recent examples of house renovations in Portugal include House in Fontaínhas, a home with candy-coloured details, and Rural House in Portugal, a house created in an old granite community oven.

Photography is by Do Mal o Menos.