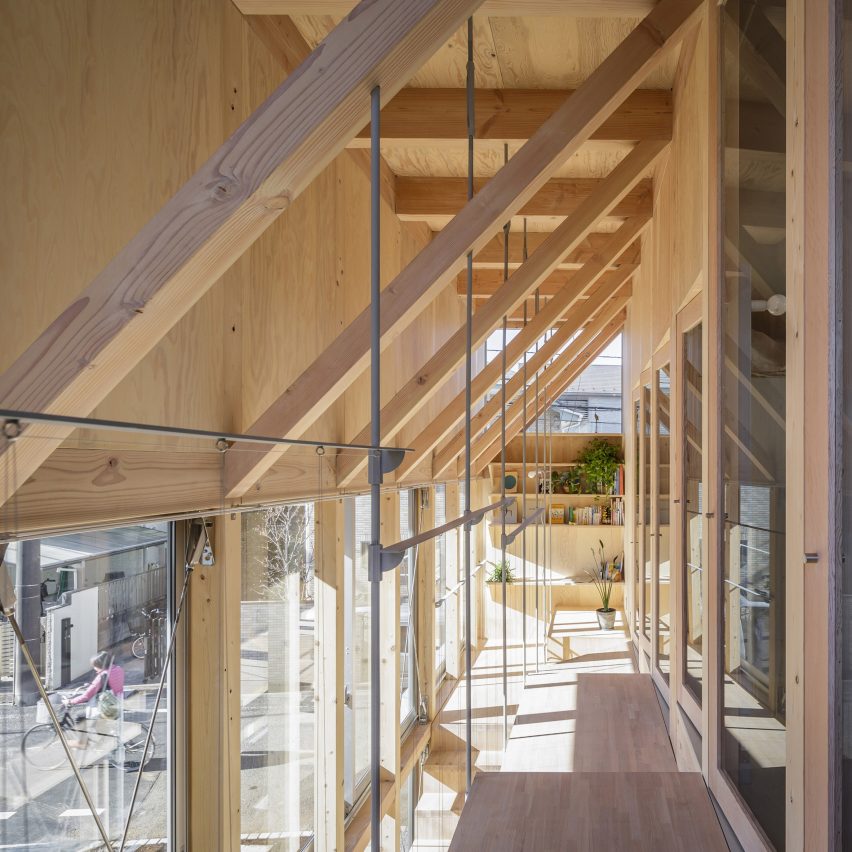 A large stairwell takes up a third of the living space in Light-Filled Stair Hall, a compact family home designed by Tokyo-based Kiri Architects.

The 79-square-metre house, which is shortlisted in the Urban House category of Dezeen Awards 2022, provides a home for a family of four in Nishitōkyō – an area to the west of Tokyo’s city centre.

Kiri Architects principal Keisuke Kiri decided to expand the staircase so that it could become a social space for occupants, rather than just a route between the home’s two storeys.

Taking cues from the engawa, a type of veranda that is typical in traditional Japanese homes, he reimagined the staircase as a space that can be used in different ways.

“This glazed and elongated staircase offers up various views and scenery to its inhabitants,” said Kiri. “It is a sublime space filled with light and breeze.”

“On a sunny day, the handrail becomes an extended washing line. And the stair tread is wide enough to sit on and relax while listening to the piano from the lower level.”

The stairwell extends across the full width of the house, positioned directly behind a glazed wall that serves as the building’s facade.

The staircase itself is formed of as few elements as possible. Treads and risers are made from 50-millimetre-thick planes of wood, supported by a system of structural columns and suspended steel rods.

This arrangement allows plenty of daylight to penetrate the other rooms of the house but also affords them some privacy, with the staircase acting as a visual buffer.

“This large staircase plays an important role in relation to the surrounding environment,” Kiri told Dezeen. 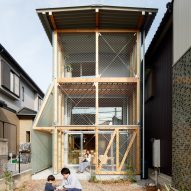 “In Japan, especially Tokyo, land tends to be subdivided even smaller,” he added. “The large stairs are an important buffer in relation to neighbours with a sense of closeness.”

The layout of the rest of the house is kept simple and flexible.

The ground floor is open plan, but a stepped floor level divides the space into two areas. One is a kitchen and dining space containing a large island counter, while the other is a lounge containing the family piano.

The room is flanked by a wall of storage including a pantry.

Upstairs, the family bathroom sits alongside a large bedroom fronted by a series of six glazed doors. These doors mean the split-level space could be easily subdivided in the future.

The house also includes a small work-from-home space, with shelving and a desk built into the end wall of the stairwell’s first-floor landing.

Light-Filled Stair Hall is one of five projects vying to be named Urban House of the Year at this year’s Dezeen Awards. Also in the running are a concrete house in India and a courtyard home in Australia.

The photography is by Anna Nagai and Shinkenchiku-sha.

The post Staircase is a social space in Tokyo house by Kiri Architects appeared first on Dezeen.