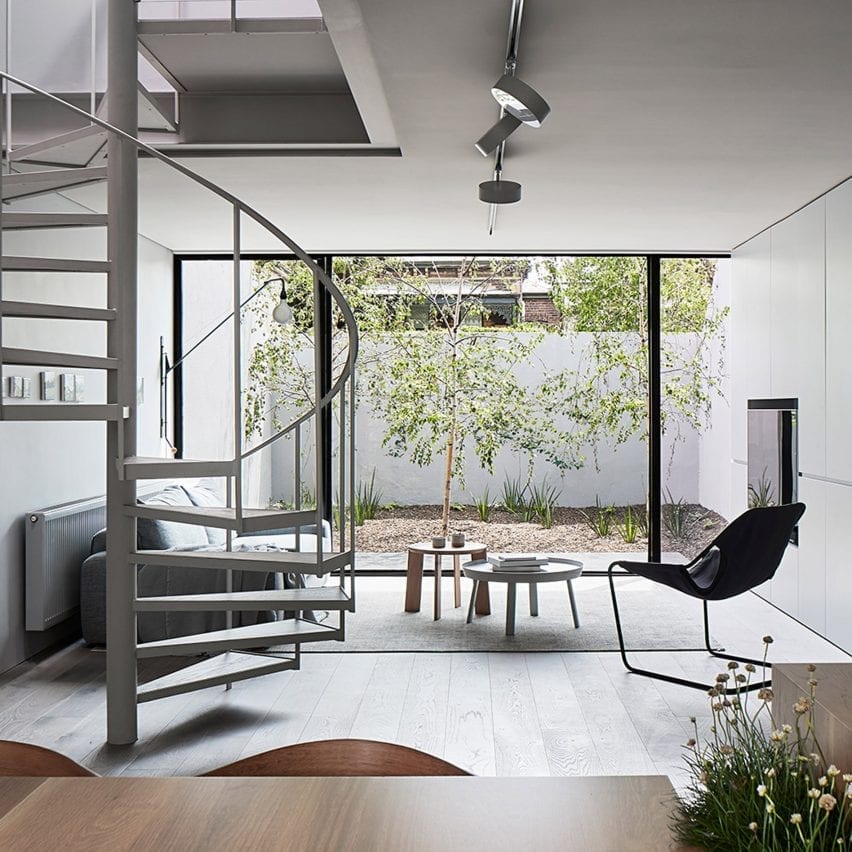 A series of portal openings improve connections between rooms and bring extra light into this 1970s residence in Melbourne renovated by Australian practice Studio Four.

Studio Four aimed to renovate the home, which was designed by Australian architect Wayne Gillespie in 1972, to improve the internal plan and bring it up to date for contemporary living.

“While the existing house was of solid build, the interiors felt lightweight by comparison and did not flow or function as desired,” said Studio Four.

“Some spaces, in particular the existing kitchen, were dark and compartmentalised and did not fully harness the possible connections with the garden.”

Located in the city’s South Yarra neighbourhood, the Cunningham Street Residence was designed by Gillespie as his first independent project and his first home.

The architect, who died in 2001, was known for his use of pure, clean lines, and combining classical design features with modern technology.

“The client’s brief was to provide a holistic solution,” explained Studio Four.

“Their brief was to strengthen Gillespie’s original vision, as opposed to creating an alternate vision that would directly contrast it.”

Studio Four replanned the rooms to enable the occupants to spend time both together and separately.

For example, the existing kitchen was relocated to the centre and rear of the home so it could be used as a central space for the family to gather in.

To make the spaces appear larger and more connected with each other and the outside space, the architects inserted a series of portal openings between the spaces.

It decorated the spaces with a palette of light and neutral colours.

“The result is a house where the architectural form and its interiors act as one, and the transition between built form and landscape is blurred.”

Studio Four, which is led by directors Annabelle Berryman and Sarah Henry, has a track record of creating homes that blur indoor and outdoor space.

Previous residential projects include an all-white family home with a garden at its centre, and a grey-brick home with a central olive tree-dotted courtyard.

Photography is by Shannon McGrath.