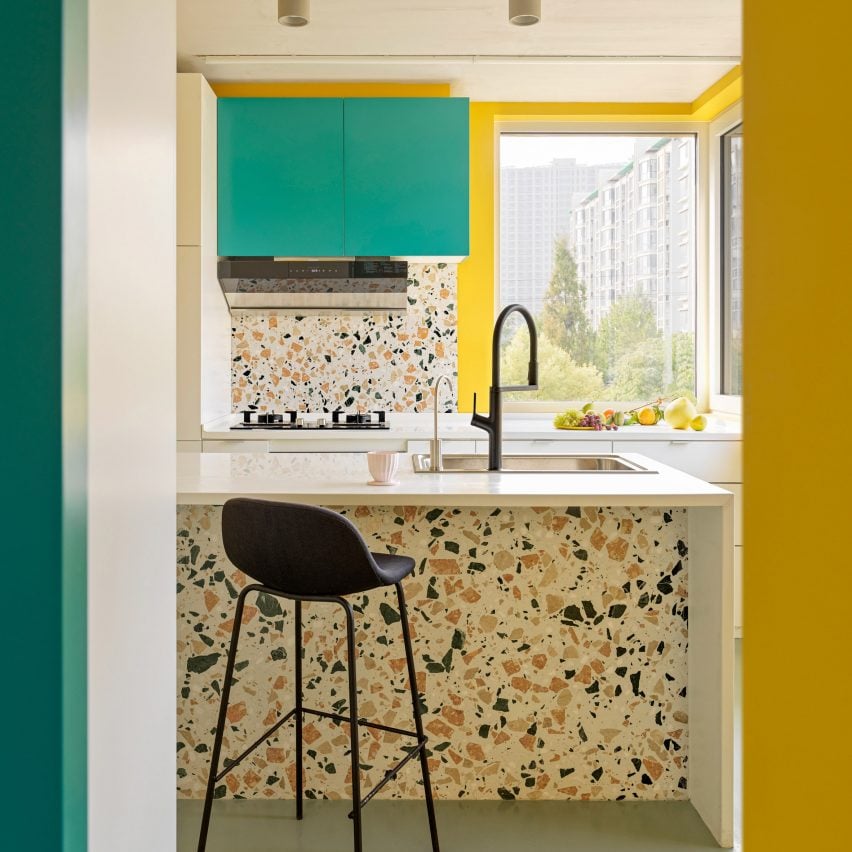 The terrazzo trend shows no sign of slowing down, with the decorative speckled material cropping up in residential projects as well as in restaurants and workspaces. For this lookbook, we’ve rounded up ten playful and practical terrazzo kitchens.

Terrazzo is a composite material made by mixing marble, granite, quartz or glass chips with a binder such as cement or resin. The rough mixture is applied to walls and floors before being polished.

The protruding stone pieces create an irregularly flecked surface that adds a fun, organic feel to interiors. Alternatively, terrazzo can be pre-cast into tiles, surfaces or objects such as vases and basins.

The material originated in Italy, where it was developed as a way of using up stone offcuts. Its popularity has grown over the past few years and today it comes in many different colours and designs.

The material is hardwearing and easy to wipe down, making it suitable for heavily-used areas like kitchens and bathrooms.

These ten terrazzo kitchens from the Dezeen archive all feature clever takes on how to best use the eye-catching material. 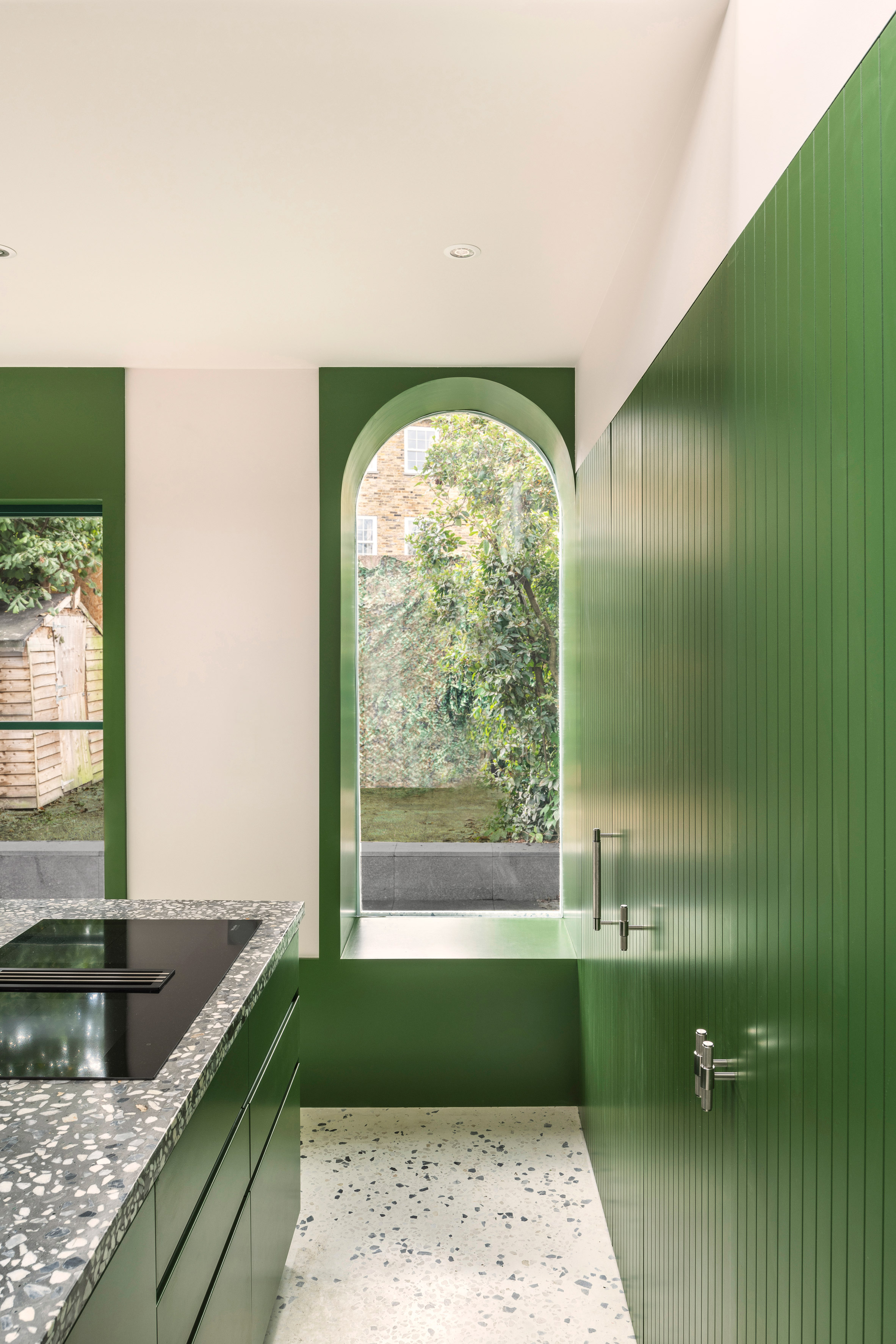 When architecture studio Gundry & Drucker gave this 1970s house in London an overhaul, it used terrazzo both for the exterior and the interior, decorating the house’s facade as well as its floors with the material.

In the kitchen, a white terrazzo slab lines the floor and is matched with a green kitchen island with a black-and-white terrazzo top. The whole kitchen has been painted a vibrant green, creating a colourful contrast to the more subdued terrazzo. 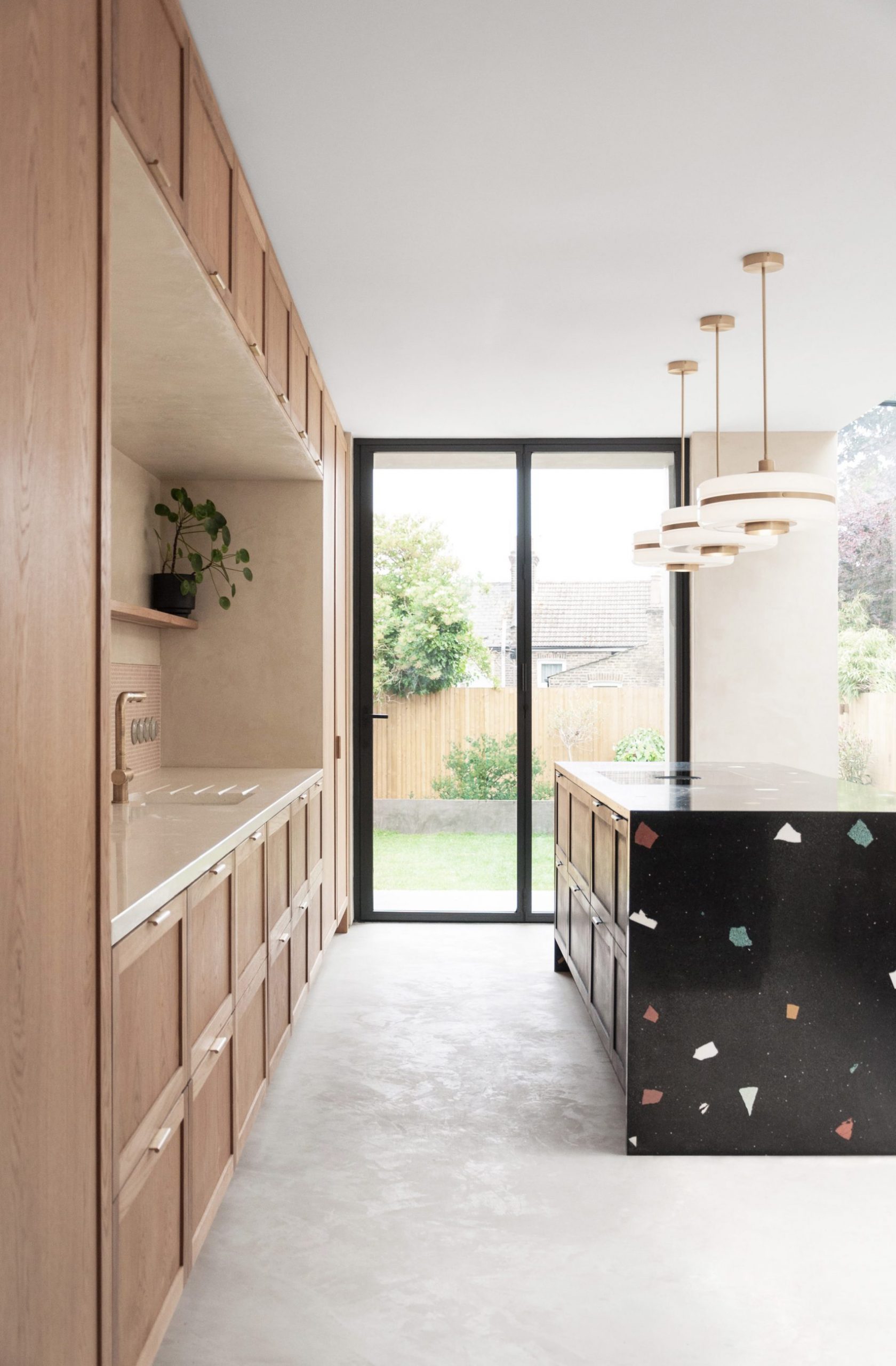 In Glyn House (above and top), designers Yellow Cloud Studio used a playful, oversized terrazzo for the kitchen island, which is inlaid with colourful chunks of aggregate.

Find out more about Glyn House › 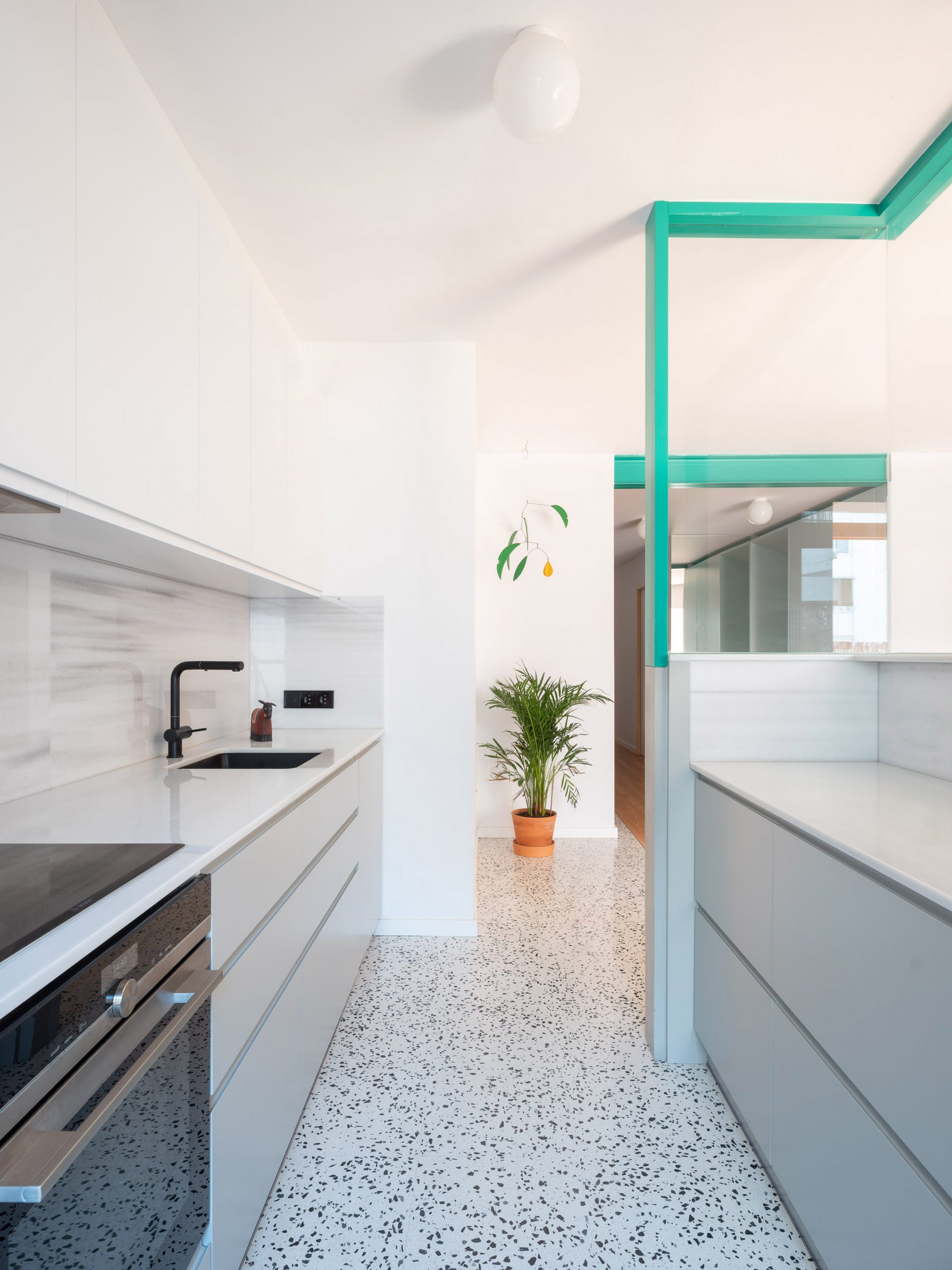 A pale-blue terrazzo floor with darker chips marks the kitchen area in this compact apartment in Vilanova i la Geltrú, Spain. The flooring continues into the hallway to cleverly connect the two rooms and create a surface where the owners and guests can store shoes without creating a mess.

The speckled pattern adds interest to the otherwise pared-down flat, especially in combination with the turquoise wooden detailing used throughout the space.

Find out more about Galla House › 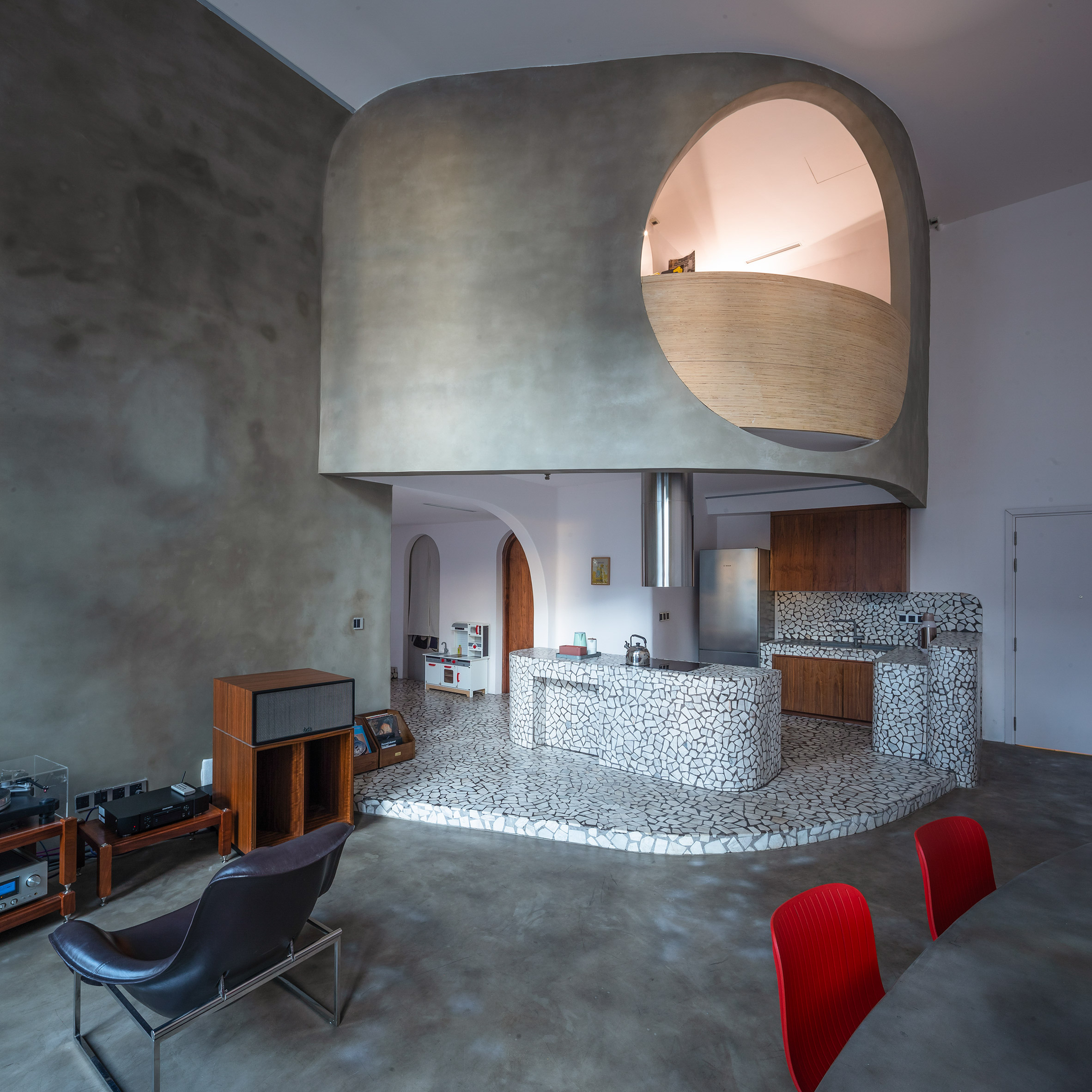 Whale Design Lab’s design for Mài apartment was informed by modernist architecture, and especially the work of Louis Kahn. The studio used terrazzo to create this striking kitchen area as it was a big trend in southern Vietnam in the 1960s.

“Modernist architecture was introduced into the south of Vietnam in the mid-20th century,” explained the studio.

“The popular construction materials of modern buildings in the United States such as exposed-aggregate surface, terrazzo and cement became trendy in Saigon.”

Find out more about Mài apartment › 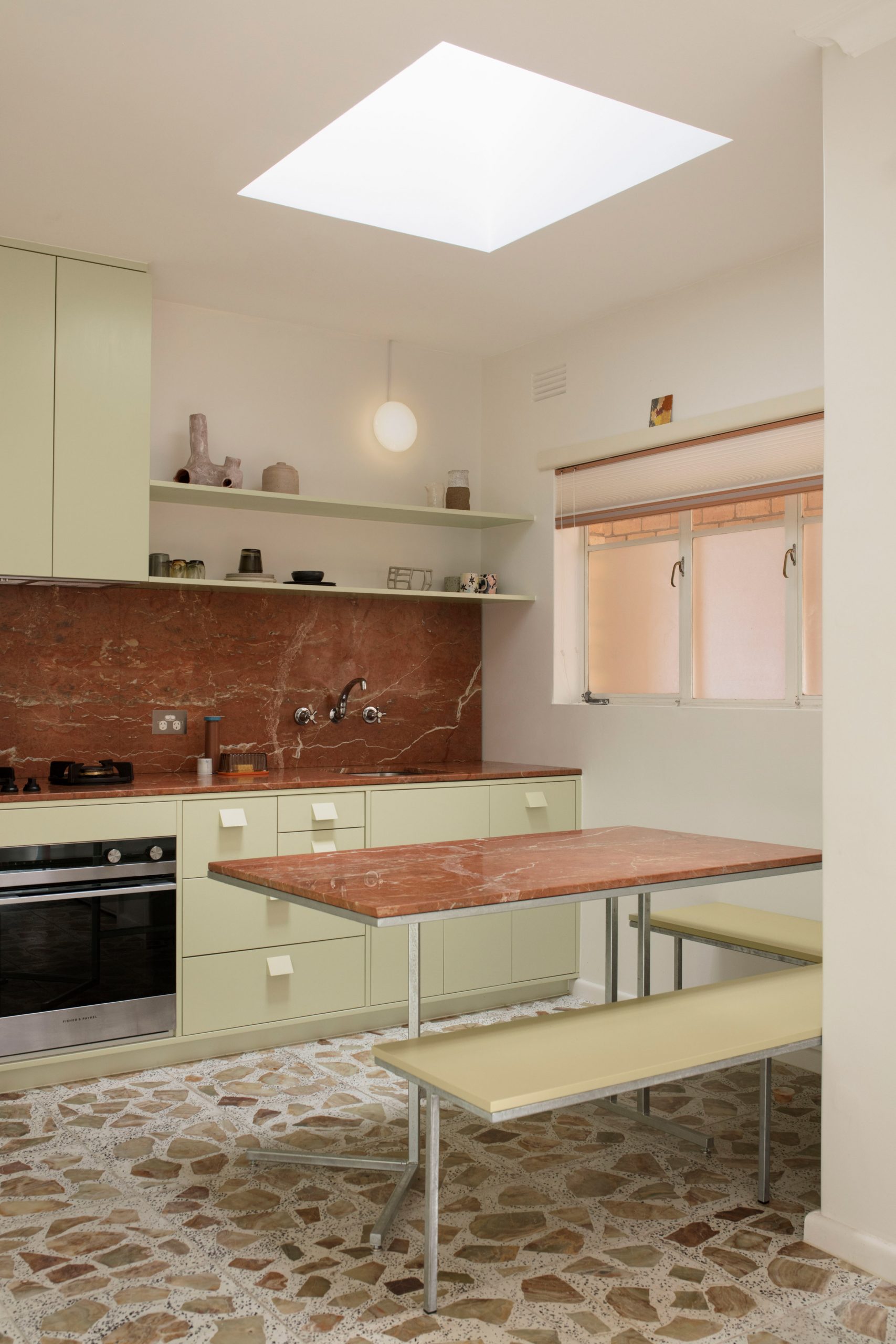 Another project to pay homage to the 1960s is this Melbourne apartment that was renovated using the same colours and materials as its original mid-century interior.

Here, the architects used terrazzo floor tiles that were salvaged excess stock from a larger project to complement the original terrazzo flooring that still remains in the bathroom. The tiles feature unusually large stone chips in a brownish hue against a flecked black-and-white background.

Find out more about Melbourne apartment › 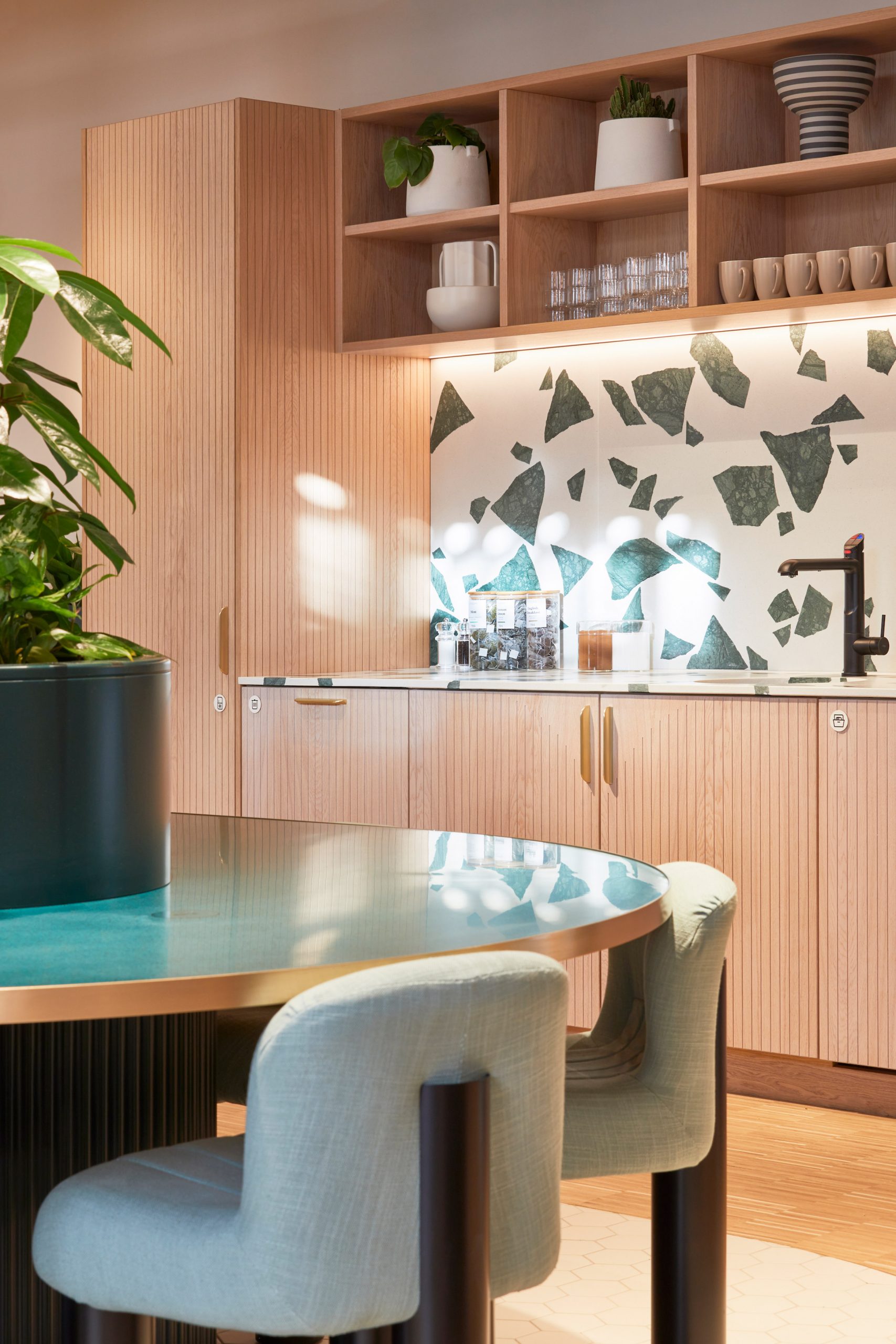 It’s not just in residential projects that terrazzo has become popular, but also in workspaces and restaurants. In London office building Liberty House, designers SODA chose terrazzo from London-based producer Altrock to create the oversized patterns used for the practical kitchen splashback.

The studio also collaborated with Altrock to create custom-made surfaces with colours that match the rest of the design.

Find out more about Liberty House › 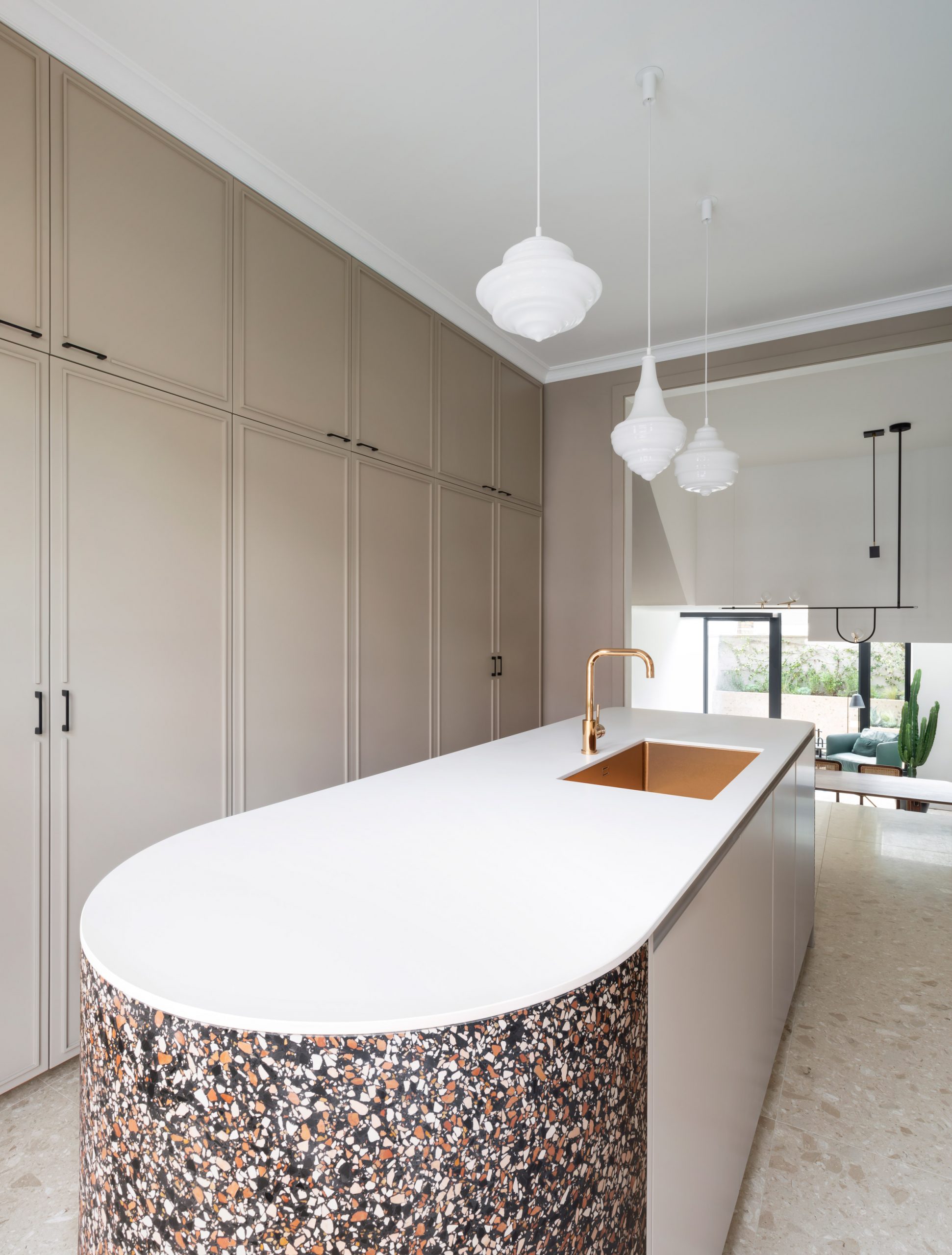 Terrazzo is everywhere in Bureau de Change‘s design for Frame House. A terrazzo floor in different shades unites the ground floor and upper stories of the split-level house, going from a pale taupe in the kitchen to darker hues.

The white kitchen island was given a red, white and black terrazzo with an almost marbled effect that adds a luxurious touch of colour and pattern to the space.

Find out more about Frame House › 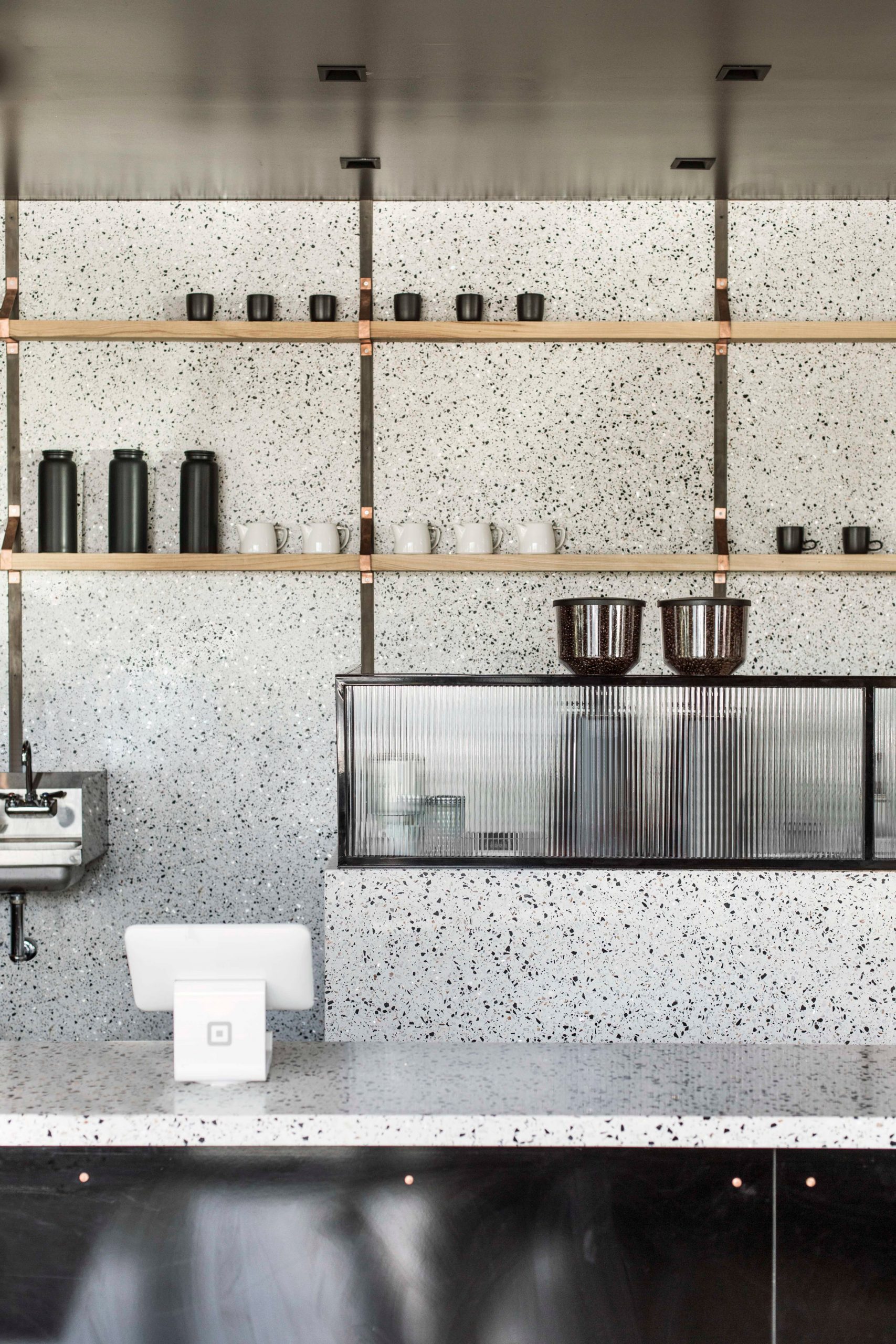 Coffeebar, US, by Walker Warner Architects

This American coffeebar in the San Francisco Bay Area has a back wall and service area entirely clad in classic black-and-white flecked terrazzo.

Simple wooden shelving and cups and jugs in monochrome ceramics complement the practical terrazzo to create a simple yet stylish design.

Find out more about Coffeebar › 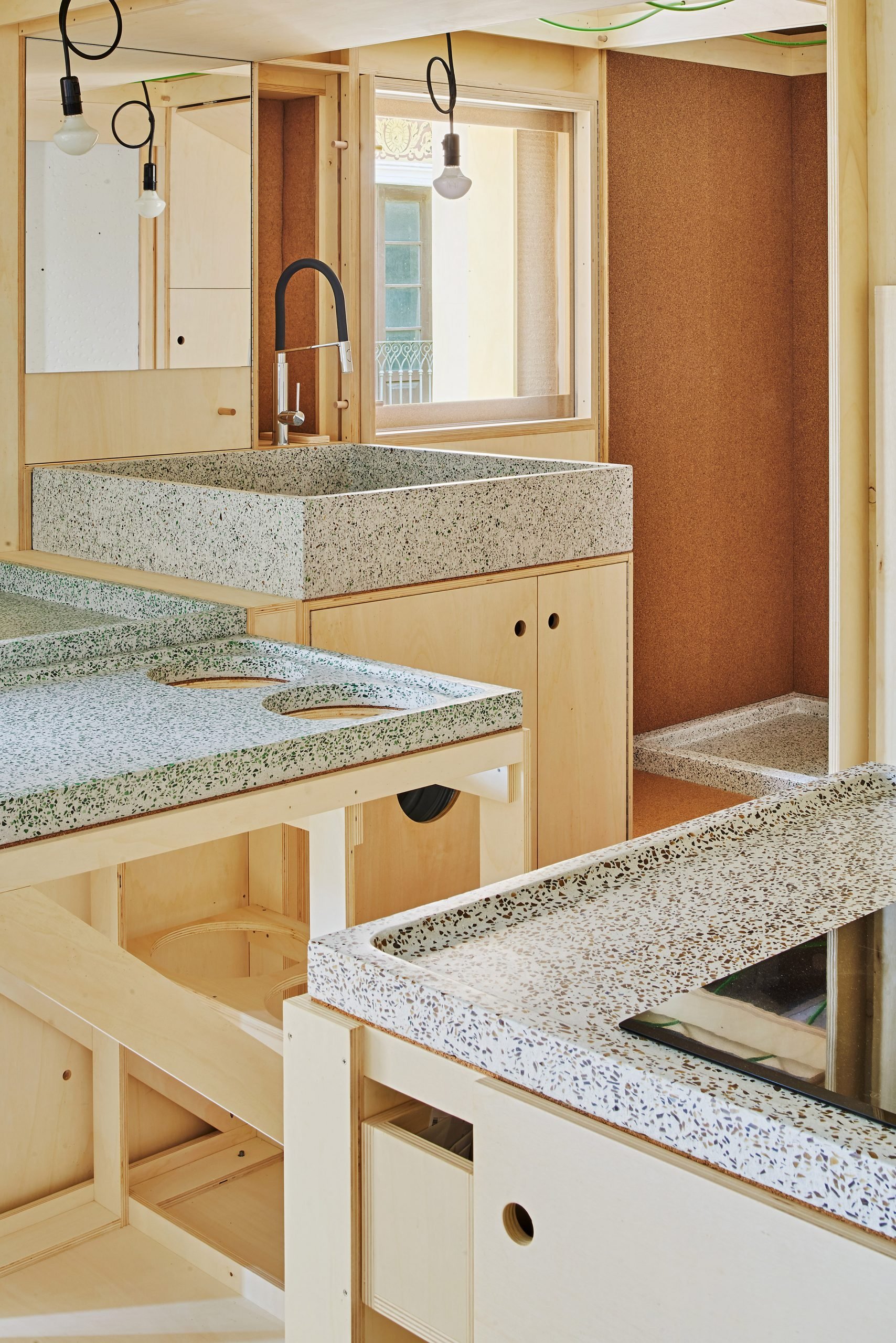 When Catalan architect Aixopluc created an experimental apartment above its office in Reus, it chose brown-and-white-speckled terrazzo surfaces for the kitchen and bathroom areas.

The slabs are made by tile brand Huguet from recycled glass and marble aggregate mixed with “green label” cement, which is meant to emit 35 per cent less carbon than standard cement.

Find out more about Alfondac guesthouse › 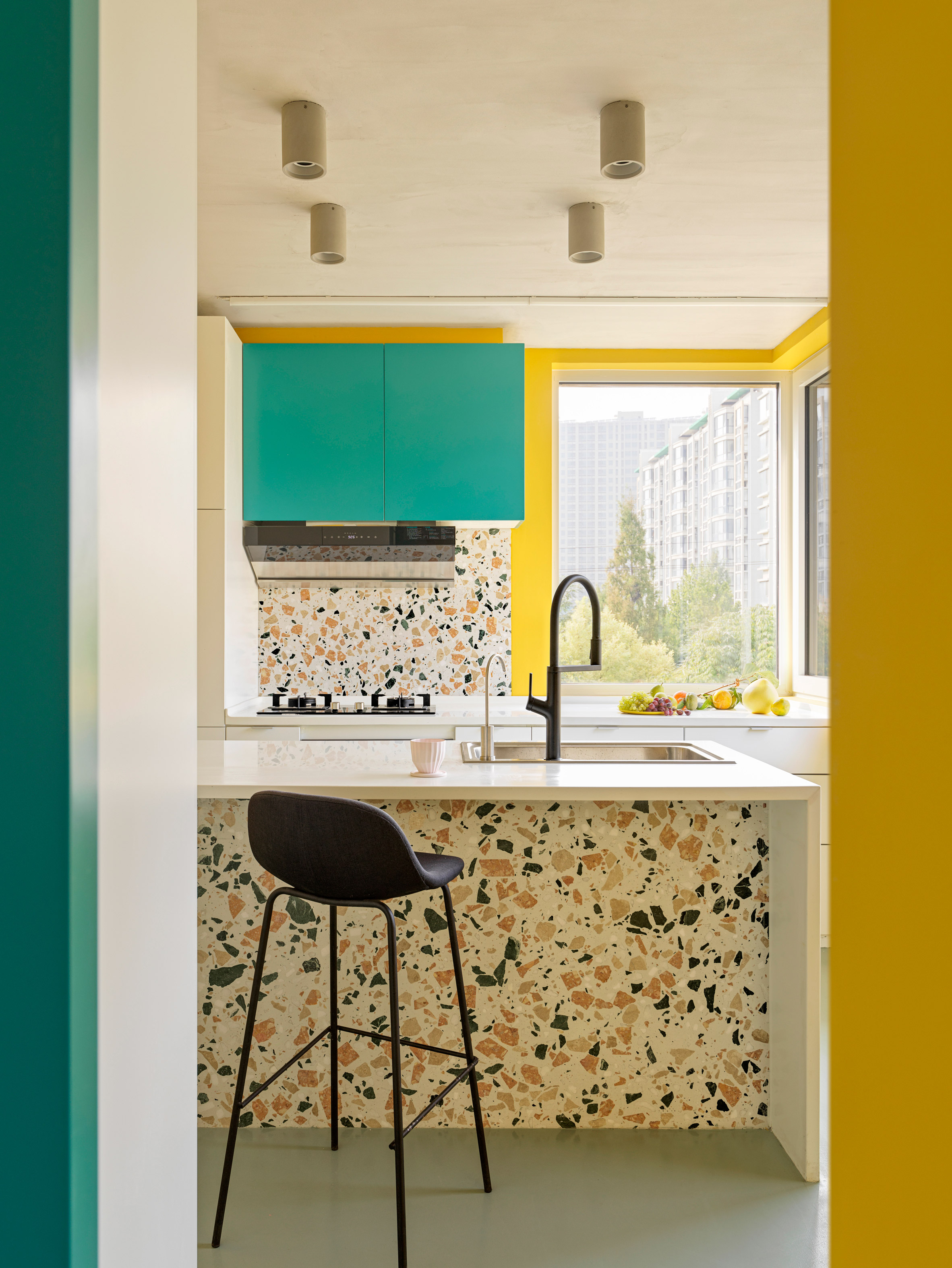 Colourful terrazzo fixtures decorate this Beijing apartment, with both the kitchen, bathroom and playroom clad in an off-white terrazzo with large chips.

“We wanted to use a material that could bring together the cement finishing of the floor and ceiling with the yellow walls,” designer Momo Andrea Destro told Dezeen.

“The colourful terrazzo is produced in the south of China by a specialized manufacturer who assisted us on a careful selection of the stones.”

The kitchen cupboards were painted turquoise to pick up the colour from the terrazzo slabs.

Find out more about House P ›