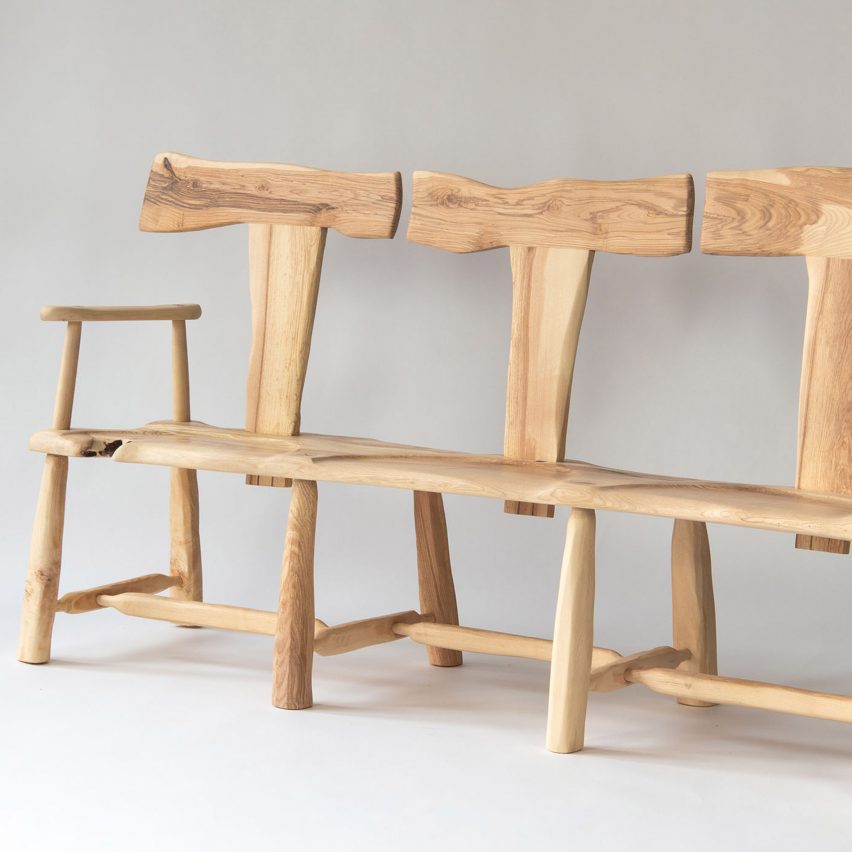 Furniture company SCP has tasked a group of British designers including Faye Toogood and Sebastian Cox to craft objects from the wood of a tree infected with ash dieback disease for this year’s London Design Festival.

The resulting pieces, ranging from furniture and lighting to decorative objects, are currently on display as part of the One Tree exhibition the brand is hosting in its Shoreditch showroom.

The project saw ten designers make use of a tree on SCP founder Sheridan Coakley’s property, which had to be felled after being infected with a highly destructive fungal disease called ash dieback. Eventually, this is expected to kill around 80 per cent of ash trees in the UK.

“Most fallen ash trees are getting just cut down and used for firewood,” Coakley told Dezeen. “But rather than burning the tree or letting it rot, we wanted to capture the carbon that’s in the wood by making something out of it.”

A group of ten designers and makers, including Cox and Toogood alongside industrial designer Matthew Hilton, carpenter Poppy Booth and design duo Wilkinson & Rivera, was invited to observe the tree being felled in April 2022 and to select the pieces of timber they wanted to use.

Toogood created a stool from the fork of the tree, which forms a natural love seat. This effect was highlighted by stripping off the bark of the wood but leaving its shape largely unadulterated.

Also making use of the thick, solid parts of the tree was designer and maker Sarah Kay, who chose to bisect a log to create a series of geometric side tables.

The logs were given flat facets to highlight the gnarled grain of the wood. This swirling, almost psychedelic graining is also apparent in Wilkinson & Rivera’s three-seater bench.

Husband-and-wife duo Grant Wilkinson and Teresa River used rudimentary forms to construct the bench, allowing the grain of the wood to serve as decoration.

Another furniture piece in the exhibition is a corner cupboard designed by Poppy Booth based on Black Square – an abstract painting by Russian-Ukrainian artist Kazimir Malevich from 1915.

Mirroring the painting, the cupboard front features a square of blackened ash surrounded by a non-burnt frame. The piece is intended sit high up in the corner of a room to act as a kind of memorial for all the ash trees killed by the dieback.

East London designer Moe Redish created a series of glass vases and vessels, which were mouth-blown into natural voids in the wood made by birds, insects, weather damage and the fungus that causes ash dieback.

Taking a similar approach, artist and craftsman Max Bainbridge chose to work with pieces of the tree that had apparent fissures, splits and raw edges, and turned them into a series of organically shaped vessels, a bench and a wall piece called Portrait of Ash. 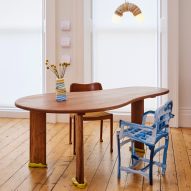 A number of designers took a more sculptural approach, with Oscar Coakley creating a giant wall fixture in the shape of an acid-house smiley while Hilton designed a helical Jenga-like sculpture made from repeating elements of carved wood.

Cox, who took charge of cutting up the ash tree using his portable sawmill and dried all of the wood for the exhibition in his South London studio, created two lights using the branches that were left behind after all the other designers had made their selections.

The branches were cut into thin, raw-edge slivers and fashioned into triangular prisms to act as shades for a pendant and standing lamp.

The pieces are being presented as part of SCP’s Almost Instinct showcase at LDF and are all for sale, with the aim of putting a selection of the items into production in the future.

“I think this is a project that might continue,” Sheridan Coakley said. “There are other trees that have got to come down, why not make something with them?”

This year’s LDF saw a slew of brands open their showrooms and run events, many returning for the first time since the start of the coronavirus pandemic.

Other projects on show as part of the festival include an installation by architecture studio Stanton Williams that was informed by Stonehenge and Shakespearian theatres, and an exhibition of furniture by James Shaw that pokes fun at the tensions that arise between cohabiting couples.

Photography is by Robbie Wallace.

One Tree is on show between 17 and 25 September as part of London Design Festival. See Dezeen Events Guide for an up-to-date list of architecture and design events taking place around the world.