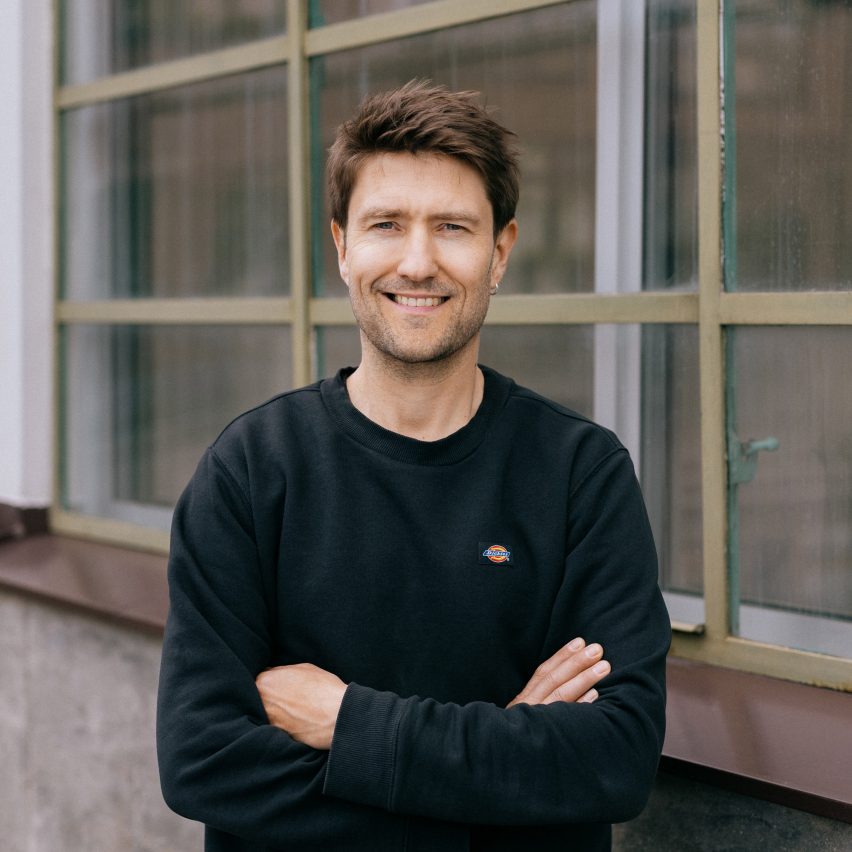 People should demand better than the “boring and banal” housing communities that have become the norm, says Christian Pagh, director and chief curator of the eighth Oslo Architecture Triennale in this interview.

“People want to have nice neighbourhoods,” said Pagh, as he introduced the exhibition in the Norwegian capital last week. “It’s not too much to ask, to expect or to fight for.”

Pagh chose Mission Neighbourhood as this year’s triennale theme, with a vision to improve the way that homes, streets and community systems are designed and managed.

The event sees the former Munch Museum building temporarily reinvented as the Oslo Neighbourhood Lab, a space hosting exhibitions, conversations and workshops exploring what a healthy neighbourhood looks like.

In an interview with Dezeen, Pagh said his ambition was to to inspire people – whether they are built environment professionals or not – to push for reform.

“What’s interesting about the neighbourhood scale is that it’s a scale you can actually affect,” he said.

“We can all take action to change our neighbourhoods. You can go to a politician. You can demonstrate.”

“Why is the baseline so low?”

Pagh believes the combination of global capitalism and industrialisation has resulted in a trend for neighbourhoods that don’t support the people that live in them and cause issues such as social isolation.

“There are developers out there with good intentions, but a lot of them just want to make money. So we end up with cities that are made for profit,” he said.

He says the issue is compounded by the fact that people don’t expect better.

“Why is the baseline so low?” he said. “In my imagination, these neighbourhoods could be so much more.”

Highlights include a vision for a car-free Copenhagen, a rewilding project in Vienna and an urban strategy for Malmö that places new value on an inner-city industrial zone.

The venue is also hosting a showcase of 16 visions for the future of four Oslo neighbourhoods, an exhibition of radical drawings by British architect Peter Cook and a pop-up design studio hosting a six-week programme of collaborative workshops.

Pagh hopes the triennale will create a sense of optimism around the future of urban neighbourhoods. He intends to combine the findings into a catalogue of best practice, to present at the World Congress of Architects in Copenhagen in 2023.

“We want to be a cross-pollinator – to bring together people that would not normally meet, to start conversations between developers, entrepreneurs, activists and anarchists,” he said.

Read on for the full interview:

Amy Frearson: Why did you choose the theme Mission Neighbourhood?

Christian Pagh: A neighbourhood is a place where everyday life unfolds. It’s about where you live and what’s around you – the cafe, the kindergarten, the little shop – but it’s also a social horizon. It’s about the reality of knowing your neighbours but also the feeling of belonging to a place. So talking about neighbourhoods allows us to talk about how architecture relates to people and notably to community.

Amy Frearson: What kind of challenges are neighbourhoods facing?

Christian Pagh: Loneliness is a huge issue in the Western Hemisphere. Somehow our spatial and technological frameworks are making us feel more alone. I think there’s a longing for the kinds of spaces where we can be together without having to be friends. It’s about how we can float into other people’s everyday lives and activities in a way that is generous and fun.

Christian Pagh: The economic pressure of global capitalism has a tendency to privatise, gentrify and commercialise the way we live. That, combined with industrialisation, has made it very lucrative to build boring and banal homes. There are developers out there with good intentions, but a lot of them just want to make money. So we end up with cities that are made for profit.

Another issue is to do with how we regulate, which is through sameness. It’s much cheaper for the contractor to build the same home again, and it’s easier to get it approved too. But the neighbourhoods we love are not all the same. They’re quirky, full of frictions and rarities.

Amy Frearson: Is part of the problem that people don’t realise what they’re missing out on?

Christian Pagh: In Norway, it’s also a monopolised market. If you don’t have a lot of money, you have to buy the new apartments that are being built, so there’s no incentive for developers to do better. But it’s also true that, to some extent, people don’t expect better.

There are some areas in Oslo that I love to hate, yet some people say they like them. Why is the baseline so low? In my imagination, these neighbourhoods could be so much more. Peter Cook’s drawings show us how we are connected and how much more magic it could be.

Amy Frearson: How are you tackling these challenges with the triennale?

Christian Pagh: As I am both curator and director, I wanted to see if we could somehow extend the impact of the triennale. We want to be a cross-pollinator – to bring together people that would not normally meet, to start conversations between developers, entrepreneurs, activists and anarchists.

The triennale will become a kind of a lab. I think that’s an interesting model, where you have research going on, you shed light on issues and you invite people in. It involves a wider community of voices into that conversation.

Amy Frearson: Can you tell me a bit more about the programme you’ve put together?

Christian Pagh: One of the things we thought was important was to find a place that could become the heart. We wanted a place that felt very open. That’s why we wanted to use the old Munch Museum.

We’ve created this pop-up lab atmosphere by combining exhibition elements with activities. The idea is to be both open for discussions on global issues but also to have a Nordic focus. We hope it will attract all kinds of normal people, as well as people with an interest in architecture and the built environment.

Amy Frearson: What was the strategy behind the exhibitions you’ve curated?

Christian Pagh: We have made a fairly traditional architectural exhibition in one way. It’s models, images and explanations. I thought that was important; I’m not an architect, but I’m truly fascinated by how we form our environments and find that most people find that interesting too. But of course you need to make it understandable; you need to frame it so it doesn’t become too full of complexity.

The last two triennales had very little architecture. They had super interesting themes and very relevant, edgy provocations. But I thought it was important to have architecture. So even though we raise a lot of challenges regarding capitalism and politics, it still is an architecture triennale.

Amy Frearson: Can you pick out any projects from the show that you think are particularly successful?

Christian Pagh: Noisy Neighbourhoods is a fantastic project. It really shows the theme of reading places, which I think is a very important aspect of talking about neighbourhoods and understanding what they can offer. It contains a really rich mapping of an area that, in the eye of the public, was nothing special. It documents local businesses, resources, relations and potential in an ugly neighbourhood, then translates that into zoning law. It challenges traditional gentrified models of development that wouldn’t be the norm today.

Amy Frearson: What are your hopes for the legacy of this project? Do you think you can impact change?

Christian Pagh: We’re facing all kinds of super complex and scary futures, with looming climate catastrophe, war, etc. I think there is a longing for solutions. What’s interesting about the neighbourhood scale is that it’s a scale you can actually affect. We can all take action to change our neighbourhoods. You can go to a politician. You can demonstrate.

My hope is that we inspire people to act. And I hope eventually that we will be able to promote directions and recommendations. Do this. Don’t do that. We’re not there yet. But next year, when we’ve had time to digest this material, we plan to produce a catalogue of best practice. The idea is to present it at the World Congress of Architects in Copenhagen in 2023.

Amy Frearson: As you’re now the director of the triennale, will you also curate the next edition in 2025? And do you expect to continue with this theme of neighbourhoods?

Christian Pagh: That hasn’t been confirmed yet, but it is the intention. So I think we will continue with the neighbourhood theme in one way or another. I would love to explore neighbourhoods in the countryside, because I think that, in many ways, the real challenges are outside the big cities. These are places where you have more social injustice and things are much more tricky. So we’ll see what comes out of that.

The photography is courtesy of the Oslo Architecture Triennale.

The post "We can all take action to change our neighbourhoods" says Christian Pagh appeared first on Dezeen.