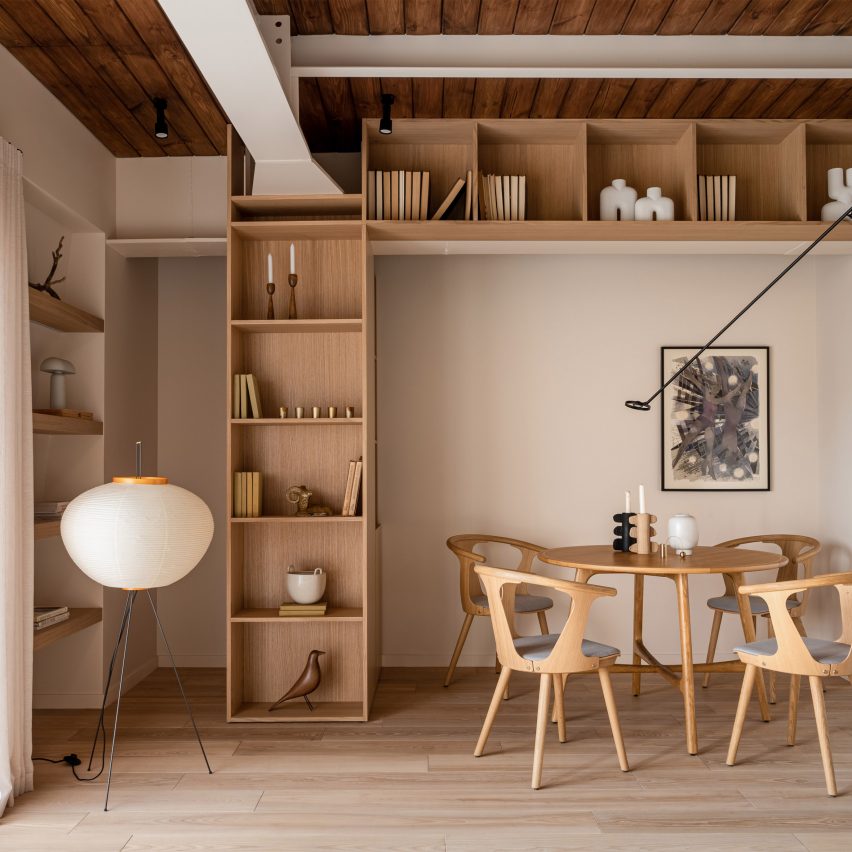 The 50-square-metre apartment, which was christened with a housewarming party a few days before the start of the Ukraine war, is a pied-à-terre for a couple that lives in one of the capital’s suburbs and likes to spend weekends in the city centre.

The apartment is located on the attic level of a modern eight-storey building in the historic Podil district, which the owners chose because it reminds them of their home city of Kherson.

The existing interior was divided by a series of metal columns and partition walls, with small windows, zinc-profiled flooring and steel roof beams making the rooms feel dark and cluttered.

The designer wanted to create a bright and eclectic space reminiscent of Kherson’s resort atmosphere, with materials chosen to bring natural warmth and texture into the daylit interior.

“I aimed to create a true atmosphere of living under the roof,” the designer told Dezeen. “When you are at the top of a building every action occurs below you, so you can observe and enjoy the view. Also, I wanted there to be no obstacles to daylight.”

The main requests from the client were for a cosy living area and a comfortable and functional kitchen where the couple can cook and entertain.

Wooden flooring and joinery contribute to the warm and relaxing atmosphere, Molodykh said, with details such as the sheer curtains and paper Akari floor lamp from Vitra adding “airy” accents.

Some of the building’s steel structure was left exposed while other parts were concealed behind shelves in the living room and the closets in the bedroom.

Built-in storage that extends all the way to the ceiling optimises the apartment’s available height. And in the dining area, storage for tableware is cleverly integrated behind one of the columns. 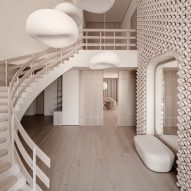 The smallest room in the apartment is the 6.4-square-metre bedroom, which features a bed raised on a podium and a wardrobe set into a niche behind a column.

A large beam that crosses the space was boxed in to prevent the uncomfortable feeling of a heavy metal structure overhead, while built-in shelves by the bed help to free up floor space.

The apartment’s compact entrance area features a tiled floor and a blue accent door, creating a visual buffer between the interior and exterior.

A small dressing area is slotted in between the beams and columns next to the entrance, hidden behind sliding doors with mirrored panels.

Geometric patterned tiles also feature in the bathroom, which contains a freestanding bathtub and shower cubicle along with terracotta ceramic sconces by Ukrainian designer Julia Kononenko.

Molodykh mixed tiles from four different brands to create a layered effect influenced by her appreciation of Ukrainian constructivist architecture, much of which is currently falling victim to Russian shelling.

“I wanted to link the apartment’s interior with important buildings nearby including the Zhytniy market and Zhovten cinema,” the designer explained.

“I admire their architecture, lines, proportions and ideas, so I wanted to pay my tribute. That is why the bathroom looks slightly different from the rest of the apartment. It makes the project more eclectic and more corresponding to its surroundings.”

Podil is one of Kyiv’s oldest districts and today, its early-20th-century buildings are neighboured by modern constructions and high-rise hotels.

These diverse architectural styles contribute to the cosmopolitan feel of the neighbourhood, which has not escaped the Ukraine war unscathed. In March 2022, a missile destroyed a building in the district some distance away from the apartment.

But Molodykh said that despite everything, people in the area still look to their homes as havens amidst the ongoing war.

“Even these days, people enjoy their cosy interiors and warm home atmosphere where they can spend time with families and close friends supporting each other,” she said.

Molodykh currently lives between here and Krakow in Poland, as it is easier for her to work on projects from outside of Ukraine.

Other projects in Kyiv that were completed just before the war and are just starting to be published in recent months include an all-beige home in the city’s outskirts by architect Sergey Makhno and the HQ of fashion label Sleeper, which is housed in a former shoe factory.

The photography is by Yevhenii Avramenko.