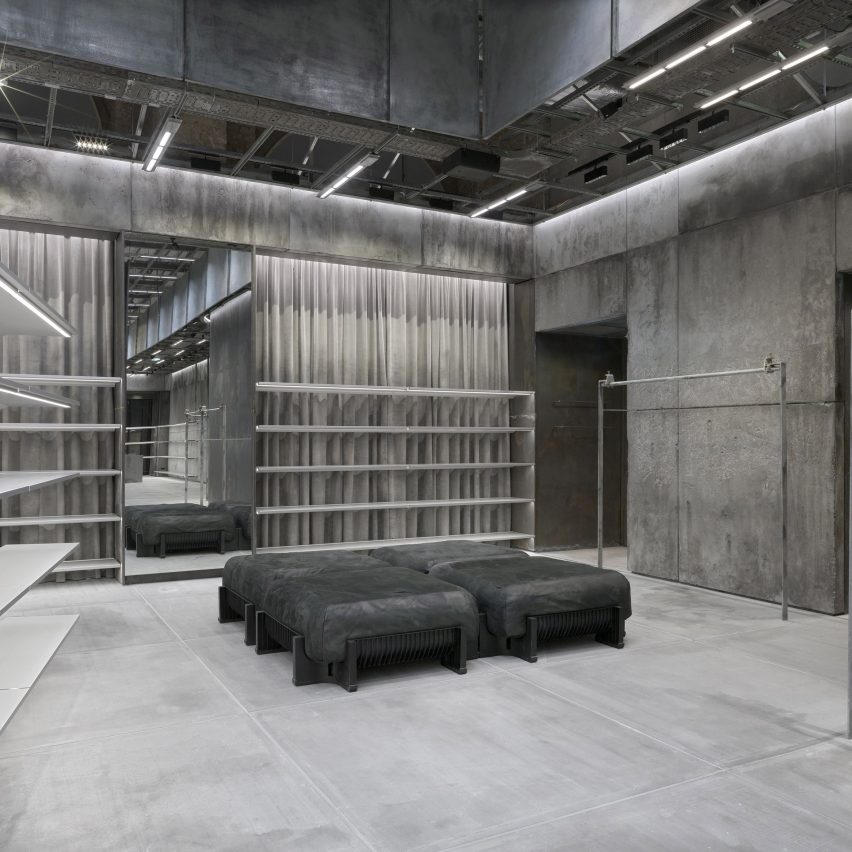 Located in Charlottenberg in western Berlin within the Grade II-listed Haus Cumberland building, the store occupies 296-square-metres across the ground floor.

In sharp contrast to the building’s neoclassical exterior, the store’s interior features Balenciaga‘s Raw Architecture concept, which the brand introduced to its retail locations at the recent unveiling of its Sloane Street store in London.

“The newly designed space continues Balenciaga’s Raw Architecture concept, which preserves and responds to existing sites, effecting an unfinished or in-progress quality, the roughness and nonconformity of which contradicts with a store’s mostly polished surroundings,” said Balenciaga.

The stone facade of the Balenciaga Berlin store and its arched windows and awnings were adorned with the sans-serif Balenciaga logo. Inside, digital screens display the fashion house’s campaign imagery and content.

The floor of the store is blanketed in squared poured-concrete slabs that reflect the sidewalk paving outside.

Stained and cracked concrete panels cover the walls beneath a dropped ceiling, which was purposely left uncovered to expose the industrial facilities and century-old structure it is intended to conceal above. 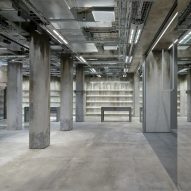 Balenciaga explained that it used aged and distressed concrete in an effort to “echo Berlin’s modernist architecture legacy”.

Mirrored glass, grey curtains and aluminium shelving cover the walls in front of and between the aged concrete, while thin metal clothes railings add a touch of delicacy, yet underline the store’s industrial setting.

“Heavily aged hanging bars add to a reduced material palette and survey of elements representative of varying eras, at once emphasizing the vastness of their space and the complexity of urban experience,” said the fashion house.

The Raw Architecture aesthetic is carried over to the store’s furnishings, with distressed, worn-leather seating placed in groups of four throughout the store to add to its decaying look.

During Paris Fashion Week in October 2021, Balenciaga made headlines with its Spring Summer 2022 collection, which included a short film featuring The Simpsons.